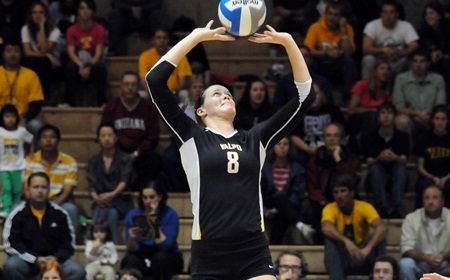 Valpo picked up four blocks in the first set and six in the second to head into the in-game break already in double figures in the category.  The Crusaders then added two in the third and three apiece in the fourth and fifth to finish with 18 blocks, the most since a 19-block effort in the Mid-Con championship match against Oral Roberts on Nov. 20, 2005.

Offensively, the Crusaders committed just 13 attack errors while hitting at a .252 clip, hitting 70 points better than Loyola.  But the Ramblers enjoyed a 67-54 advantage in kills in their final match ever at Alumni Gym.

“We just really got outworked and outplayed today, no question about it,” said Crusader head coach Carin Avery.  “I was impressed with Loyola's tenacity in their last match; it was a great way for their seniors to go out.  Hopefully we'll take some positives from this match and also find the things we still need to work on, and then use that to give us a little push as we head into the tournament.”

The Crusaders used a 10-1 run midway through the set to take control of the opening frame Saturday, a run that featured kills by five different Valpo players.  The Crusaders also posted three blocks during the spurt, with Layman in on all three rejections, as they extended a 7-6 lead to 17-7.  The Ramblers would eventually close back to within six points at 21-15, but Valpo ended the set on a four-point spurt, capped by a kill from Layman, to take the opener.

Valpo turned a 13-9 deficit in the second set into a 14-13 lead with five straight points, including a kill and a solo block from junior outside Katie Britton (Mishawaka, Ind./Marian), but after the squads traded sideouts, Loyola went on a 6-0 run to take control at 20-15.  The Ramblers earned set point at 24-18, but a kill by Britton and blocks from first Diebler and Britton and then Diebler and Pokorny staved off three Loyola chances.  But an attack error by the Crusaders at 24-21 sent the match into the in-game break tied at a set apiece.

The Crusaders trailed early in the third frame, 7-6, but used an 8-2 run to take control thanks to four Loyola errors and a kill and an ace from Diebler.  Leading 14-9, Valpo surrendered a 4-1 spurt to the Ramblers as the lead shrank to 15-13, but out of a timeout, the Crusaders scored four straight, including two aces by Pokorny, to gain breathing room.  With the score 23-15, Loyola tried to put together a comeback effort, scoring five straight to close to within 23-20, but a Rambler hitting error and a Layman kill ended the set and gave Valpo a 2-1 lead.

Loyola's Mallory Curran registered six straight kills early in the fourth set as the Ramblers built a quick 10-2 advantage.  The deficit was 19-12 before the Crusaders started a furious rally, as a kill by freshman outside Sarah Dooms (Greenwood, Ind./Center Grove) and a Loyola error cut the lead to five points.  A Rambler kill made it 20-14, but fifth-year senior Val Bollenbacher (Bremen, Ind./Bremen) and sophomore outside Mary Dent (Chicago, Ill./Von Steuben) picked up kills, and then the latter combined with Layman on a block to force a Loyola timeout at 20-17.  Out of the stoppage, Dent and then Bollenbacher again recorded kills to close within one point, and out of the Ramblers' second timeout, Dooms recorded an ace to improbably tie the set at 20-all.  But Valpo could not gain an outright lead, as Loyola scored the next three points and eventually sent the match to a fifth set on a Curran kill.

The Crusaders would never lead outright in the fifth set, either, but tied the set on six separate occasions.  Loyola (11-17, 4-12 Horizon) started the set with three straight points, but Valpo responded with its own three-point spurt, including kills by Britton and Diebler.  The Ramblers pushed the lead out to three points again at 10-7, 11-8 and 13-10, the latter forcing the Crusaders to use their second timeout.  Out of the stoppage, Pokorny and Britton picked up kills and then a Loyola attack error tied things at 13-all.  Curran picked up a kill to give Loyola match point at 14-13, but Britton kept the Crusaders in the match with a kill.  Colleen Francis answered with a kill to give the Ramblers a second chance to end the match, which they did on a Valpo attack error.

Britton hit .429 with 18 kills to lead the Crusader offense Saturday, while Diebler added 10 kills.  Pokorny, in addition to her new career high for blocks, also matched her career high with four aces and added 37 assists and 10 digs.  Sophomore libero Taylor Root (Jenison, Mich./Jenison) paced all players with 28 digs on the afternoon.  Loyola was led by 23 kills on .381 hitting from Curran, while Diana Schulte chipped in 15 kills.

Valparaiso (24-7, 10-6 Horizon) heads to the Horizon League Championship next week in Milwaukee, Wis.  Action at the three-day tournament is slated to start on Friday, and seedings and matchups will be announced by the league office on Sunday.  All the Crusaders' matches at the tournament will be broadcast live on WVUR (95.1 FM, Valparaiso) and online at www.valpoathletics.com, which will also have links for live video and live stats as well as hosting live chats.