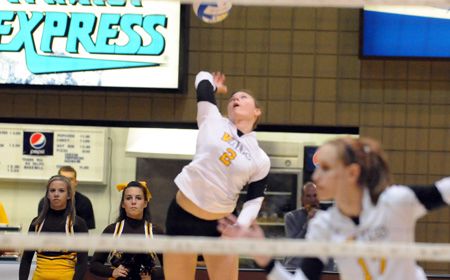 Freshman Ariel Cudney (LaPorte, Ind./LaPorte) tallied five aces in a 12-point run to close the opening set and Valparaiso then scored the first eight points of the second set en route to a 3-0 (25-17, 25-13, 25-19) sweep of Green Bay Friday evening in quarterfinal action at the 2010 Horizon League Volleyball Championship in Milwaukee, Wis.  Valpo will now take on host Milwaukee in the first semifinal Saturday at 1 p.m.

“I'm really proud of the way this team played tonight,” said Crusader head coach Carin Avery.  “Green bay is a very good team which has been on a roll lately.  I thought it was a tough first-round draw for us, and for us to get out of there in three sets makes me extremely happy.  It's not easy to do that against a quality opponent.”

Cudney entered with the Crusaders trailing 17-14 after a kill by Tara Diebler (Indianapolis, Ind./Franklin Central), as Valpo trailed by as much as six points in the opening set.  The freshman, who entered the match leading the league and ranked  13th nationally in aces/set, quickly unleashed back-to-back service aces to force Green Bay to use its first timeout.  Out of the stoppage, a Phoenix attack error knotted the set at 17-all for the first time since 5-5, and then Cudney picked up her third ace of the run.

Now trailing, Green Bay used its second timeout, but it wouldn't slow down the Crusader momentum.  Diebler and Val Bollenbacher (Bremen, Ind./Bremen) combined on a block to make it 19-17, followed by Diebler killing an overpass directly off Cudney's serve.  Bollenbacher registered a kill before Cudney tallied her fourth ace of the spurt, making it 22-17.  Diebler followed with another kill, and then the freshman gave the Crusaders an improbable seven set points with a fifth ace.  Bollenbacher quickly ended the suspense with a kill to give Valpo the opener thanks to a set-ending 12-0 run.

“Honestly, Ariel single-handedly changed the match tonight, there's no question about it,” said Avery.  “We were really struggling to find a rhythm early, which I think was a lot due to nerves.  We were just playing really tentative and needed someone to change that for us.  Ariel came in and changed the whole course of the match, not just that one set.  She really took the wind out of Green Bay's sails with her serves during that run.”

The run would reach school-record proportions at the start of the second set, as despite switching to libero Taylor Root (Jenison, Mich./Jenison) back at the service line, the Crusaders still refused to surrender a point.  The frame started with kills by Diebler and Katie Britton (Mishawaka, Ind./Marian) and a Green Bay attack error which made it 3-0 and forced the first Phoenix timeout.

Out of the stoppage, Jenny Pokorny (Geneva, Ill./Geneva) tallied a kill before Green Bay committed three straight hitting errors, followed by another Diebler kill to make it 8-0, at which point the Phoenix used its second timeout of the set.  Following that timeout, the Phoenix finally hit the scoreboard, breaking a 20-0 Crusader run over the two sets, a new school record for consecutive points scored in the rally scoring era.  The result of the second set was academic from there, as Diebler and Britton combined for 11 kills on 21 swings and Valpo never led by less than seven points.

The third set ended up being the tightest of the match, featuring 13 ties and eight lead changes.  Green Bay went on a three-point spurt to gain a 10-7 lead, leading to a Valpo timeout.  The Crusaders responded with six straight points, including two kills by Britton and a kill and an ace by Sarah Dooms (Greenwood, Ind./Center Grove), to claim a 13-10 advantage.

The Phoenix answered with four points in a row of its own to re-take the lead at 14-13, setting up a back-and-forth battle for control of the set.  Finally, at 19-all, Green Bay committed a service error, and Valpo refused to give up the serve from there.  Katie Layman (LaPorte, Ind./New Prairie) combined with first Pokorny and then Dooms on blocks to make it 22-19, and then Pokorny picked up back-to-back kills to give the Crusaders a number of match points.  One was all that Valpo would need, however, as Dooms ended the match with a kill to send her squad into the semifinals.

Britton, as she has done the last three weeks, again led the Crusader offense, posting 17 kills on .500 hitting for the match.  Diebler added 11 kills as well, as Valpo finished the match with 45 kills on .250 hitting as a team.  Pokorny handed out 32 assists on the evening.

The Crusaders ended the night with eight total aces, led by the career-high matching five from Cudney.  Root paced Valpo in the back row with 20 digs, while Bollenbacher added 15 and Dooms 10.  With her performance Friday night, Root moved into second on Valpo's single-season digs chart and also cracked the Crusaders' career top-ten list.  Bollenbacher, Layman and Diebler all joined in on three of Valpo's six team blocks.

“We did a much better job after set one with our blocks, and I thought that was a big key as well,” said Avery.  “Green Bay started tipping and roll-shotting, and we were able to defensive transition balls for points.  Katie Britton has really been playing the best volleyball of her career the last three weeks, and again tonight she came up really big for us and had a great match.”

Green Bay (12-19) was led by nine kills from Abbey Gitter, but no other Phoenix player had more than six kills.  Brittany Groth led all players Friday night with 24 digs.

Valparaiso (25-7) takes on the top-seeded Panthers at 1 p.m. Saturday afternoon.  All the action can be seen and/or heard live at www.valpoathletics.com, with live stats and live chat also available through the official Crusader website.