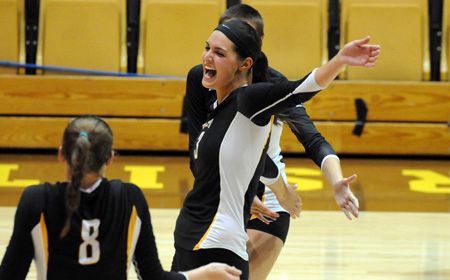 Valparaiso blitzed host Milwaukee in the first set and then rallied in the final two sets for a 3-0 (25-7, 27-25, 25-23) sweep of the league regular-season champion in the first semifinal of the 2010 Horizon League Championship. With the win, the Crusaders will play in the championship match Sunday at 1 p.m.

“I almost don't even know what to say,” said Crusader head coach Carin Avery.  “I'm just so proud of our seniors, because they really set the tone for how the match was going to go today.  I think us having played yesterday was crucial; we were able to get our nerves and kinks out yesterday.  We came into today with nothing to lose, and that's exactly how we played.”

Defensively, sophomore libero Taylor Root (Jenison, Mich./Jenison) paced the Crusaders with 22 digs, putting her over the 700-dig mark for the season, only the second player in Valpo and Horizon League history to reach the milestone.  At the service line, freshman Ariel Cudney (LaPorte, Ind./LaPorte) ripped off four aces after registering five during Friday's quarterfinal.  Cudney now has 52 total aces on the year, tied for fifth-most in a single season in Valpo history, and ranks among the top-ten players in the nation in the category.

Coming off of a sweep of Green Bay Friday night, the Crusaders had no problem getting out to a fast start Saturday.  Back-to-back kills by Diebler and a kill by junior Katie Britton (Mishawaka, Ind./Marian) started the match, and two straight hitting errors by the Panthers gave Valpo a 5-0 advantage.  Another Britton kill was answered by a UWM kill to put the Panthers on the board, but two more attack errors by Milwaukee pushed the lead to 8-1.

Dooms then put down an overpass to force the Panthers' second timeout at 9-1, and the advantage just grew from there as Valpo posted its second-best single-set performance since the move to rally scoring.  Fittingly enough, the frame ended on two straight aces from Cudney.  The Crusaders hit .483 with 14 kills and no attack errors in the opener while not allowing Milwaukee to score two straight points at any point in the set.

As easy as the first set was, the Crusaders knew the rest of the match wouldn't be so smooth against the league's regular-season champion.  Valpo led near the midway point of the second set at 10-8 before a 5-0 Milwaukee run forced the Crusaders' first timeout of the match.  The Panthers extended their lead to as many as six points at 20-14 before Valpo started to rally.

Kills from Dooms and junior Jenny Pokorny (Geneva, Ill./Geneva) cut the deficit to 20-16 as Milwaukee used its first timeout.  The teams would trade sideouts on the next four points, as it remained a four-point set until Britton picked up another kill to make it 22-19.  A Valpo attack error pushed the lead back to four points, but then consecutive Panther hitting errors moved the Crusaders within two points at 23-21.

The Valpo attack came up big on the next pair of points, as first Dooms and then Diebler tallied kills to knot up the set at 23 apiece.  A Crusader service error gave Milwaukee a set-point opportunity, but then it was the Valpo block making the big play, as Diebler and fifth-year senior Val Bollenbacher (Bremen, Ind./Bremen) combined on a rejection to send the set into extra points.  After a UWM kill thwarted the Crusaders' first chance to take the set at 25-24, Dooms picked up a kill to make it 26-25 and then went up with senior Katie Layman (LaPorte, Ind./New Prairie) to pick up the set-ending block and complete the comeback.

“Obviously that first set really steered the direction of the match, but I think the most important factor was the way we won that second set,” said Avery.  “Milwaukee having the opportunity to tie the match and us closing in to take the set was huge.  It was just a great total team effort today.”

Valpo got out to a good start in the third set as well, earning an early 6-3 advantage, all of the Crusaders' points coming on kills.  Milwaukee rallied to tie the set at 10-all, but then a Diebler kill followed by two more Cudney aces pushed the lead out to 13-10.  The lead would continue to increase, as a pair of kills by Dooms and terminations by Layman and Bollenbacher made it 18-13 in favor of the Crusaders.

But the sweep would not come that easily for Valparaiso, as Milwaukee scored the next six points to completely erase the Crusader advantage and re-gain the lead.  Valpo used both of its timeouts during the spurt, the second coming after the Panthers took the 19-18 lead.  Out of the stoppage, a Panther attack error tied things at 19 and set up a back-and-forth ending to the third set.

Eliabeth Egerer picked up a kill for Milwaukee, but Pokorny and then Britton registered kills to push the score in Valpo's favor, 21-20.  The Panthers responded with another kill from Egerer and followed with a block to go ahead 22-21, but a Panther hitting error tied the set at 22.  UWM's Kerri Schuh again gave her side the lead at 23-22 with a kill, but Diebler responded with the last of her 15 kills to tie it at 23-all.  Dooms then registered a kill on what proved to be the match's penultimate point before a back-row attack call on Milwaukee completed the Crusader sweep.

Valpo ended the match hitting .287 with 49 kills over the three sets.  Britton added nine kills to the pair of players in double figures, while Bollenbacher (5 kills) and Pokorny (3 kills) each were flawless on the attack.  Pokorny handed out 38 assists on the afternoon and also finished the match with nine digs.

The Crusaders held Milwaukee (20-9) to just .108 hitting and 35 kills for the match.  The Panthers were paced by 12 kills from Egerer.  Jena Berg handed out 27 assists in the losing effort, while Morgan Potter led all played with 24 digs.

Valparaiso (26-7) earned a spot in the Horizon League Championship match for the second time in its four seasons as a league member, and it marks the Crusaders' sixth league finals appearance in nine years under Avery.  The Crusaders will face the winner of Butler and Cleveland State Sunday afternoon at 1 p.m., with the winner earning the Horizon League's automatic berth into the NCAA Tournament.  The match can be watched live through the Horizon League Network, while the audio broadcast will be available on WVUR (95.1 FM, Valparaiso).  Links for both the video and audio webcasts, as well as live stats and live chat, will be available at www.valpoathletics.com.