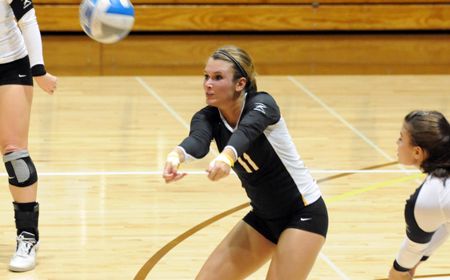 Diebler averaged 3.78 kills and 1.00 blocks/set while hitting .256 over the Crusaders' three matches at the tournament, including a team-best 15 kills on .483 hitting in Valpo's win over top-seeded Milwaukee Saturday.  Root, who was named to the All-Tournament squad for the second time in as many years, averaged an even 7.00 digs/set and picked up at least 20 digs in all three matches, while also not committing a serve reception error on the weekend.  The duo was joined on the All-Tournament Team by Butler's Jessica Wolfe (MVP), Gina Vera and Katie Daprile, Milwaukee's Elizabeth Egerer and Cleveland State's Jackie Dabbelt.

“You can't take away what we've done this year, as disappointing as it is to lose today,” said Crusader head coach Carin Avery.  “To lose what we did in a pair of players who were honorable mention All-Americans and still having as excellent of a season as we've had is really saying something about the girls we have.  I think it's even more impressive given the fact we have 10 underclassmen on our team, and hopefully for the future, this experience is something the youngsters can build on.”

The opening set was back-and-forth in the early going, as the squads reached the halfway mark tied at 13 apiece.  It was at that point that Butler went on a four-point run to gain the advantage, a lead it would maintain up until 21-17, when the Crusaders put together a spurt of their own.  Junior Jenny Pokorny (Geneva, Ill./Geneva) picked up a second-touch kill and then combined with senior Katie Layman (LaPorte, Ind./New Prairie) on a block.

A Butler attack error brought Valpo back within one point, and then a kill by junior Katie Britton (Mishawaka, Ind./Marian) tied up the set at 21-all.  But the Bulldogs won the next three points to gain set point, and despite a Layman kill to fight off one chance, Butler captured the opening set on a block.

The second set saw each team put together spurts, but neither gain outright control.  Butler led 5-2 early on, but a bit later, a three-point mini-spurt by the Crusaders, including a kill by freshman Sarah Dooms (Greenwood, Ind./Center Grove) and a block by Dooms and Layman, gave Valpo a 10-8 advantage.  The Bulldogs responded with a five-point run to take back the lead and push it to 13-10.

Still trailing by three at 16-13, the Crusaders put together a 5-1 run, featuring kills by fifth-year senior Val Bollenbacher (Bremen, Ind./Bremen), Britton, Diebler and Pokorny, to regain the lead at 18-17.  But after the teams traded sideouts to make it a 19-18 Valpo advantage, Butler scored the next four points, and Valpo was unable to put together two straight points from that time on, as the Bulldogs eventually closed the set with the last of their 21 kills.

The Crusaders trailed start-to-finish in the finale, but made a couple runs to stay close.  Trailing 9-5, Valpo got a pair of kills from Dooms as well as a Butler attack error to stay within one point.  Then, after a 6-1 Butler run had pushed its lead out to 15-9, the Crusaders answered with four straight points on kills by Britton, Dooms, and Pokorny and an ace by Root to move within 15-13.  But five straight Crusader attack errors gave Butler plenty of breathing room, and it eventually closed the tournament on a kill by Wolfe.

Britton led the Crusaders on Sunday with 11 kills, but was the only Valpo player to reach double figures in the category.  Pokorny handed out 30 assists, while Bollenbacher tallied 12 digs and Dooms 10 to add to Root's 21.  Wolfe led Butler (21-9) with 13 kills and also registered 15 digs, while Claire Randich hit .692 with 10 kills.  Katie Daprile led all players with 22 digs, and Maureen Bamiro tallied a match-high five blocks.

“You have to give Butler credit, they did a lot of the small things really well today,” said Avery.  “Their passing was amazing, giving them three options for hitting a lot of the time, which made them hard to stop.  Their defense also really took care of the ball very well today.”

Valparaiso (26-8) closes out its 2010 campaign with one last match on Saturday as the Crusaders travel to take on Western Michigan in Kalamazoo.  First serve is set for 6 p.m. CST.