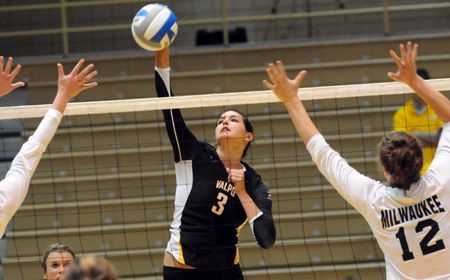 Valparaiso opened its second weekend of play the same way it closed out the opening weekend, defeating USC Upstate 3-1 (25-12, 20-25, 25-11, 25-12) in the opener of the Appalachian Invitational in Boone, N.C. Friday afternoon for its fourth straight victory.

The Crusaders got the job done on both sides of the ball Friday, hitting a stellar .304 offensively with 60 kills over the 40 sets. Defensively, Valpo matched its season-high with 10 blocks to help hold the Spartans to .087 hitting and just 33 kills.

A pair of kills from Katie Britton (Mishawaka, Ind./Marian) and a solo block by Tara Diebler (Indianapolis, Ind./Franklin Central) gave Valpo the first three points of the match as it would never trail in the opening set. The early lead was extended to 9-3 and the Crusader advantage never fell below four points the rest of the way to take a 1-0 lead. USC Upstate turned the tables in the second set to even the match, jumping out to an 8-3 advantage and holding off a late Crusader run that cut the lead to three points at 22-19.

USC Upstate hung around for a while in the third set, as at the midway point of the frame, Valpo led by just two at 12-10. But the Spartans committed a service error and the Crusaders would need just two servers the remainder of the set. Andrea Balsis (Benton Harbor, Mich./Coloma) got the big run going with a service ace and the Crusaders then got kills on each of the next five points, three off the hand of Val Bollenbacher (Bremen, Ind./Bremen).

A Spartan kill cut the edge to 19-11, but Sarah Dooms (Greenwood, Ind./Center Grove) answered with a kill of her own and Diebler stepped back and served the final five points to help the Crusaders close the set with a 13-1 run. The final set was almost completely anti-climactic, as Valpo's momentum rolled into the fourth frame to the tune of a quick 13-3 lead and the Crusaders cruised to the win.

Pokorny continued her stellar job running the Crusader offense, posting a double-double with 43 assists and 13 digs. The junior also hit .357 with six kills and chipped in on a trio of blocks. Taylor Root (Jenison, Mich./Jenison) led all players in the back row with 22 digs. Mindy Quimby paced USC Upstate (1-3) with 11 kills.

Valparaiso (4-1) will attempt to extend its winning streak on Saturday with a pair of matches to close the Appalachian Invitational. The Crusaders face Eastern Kentucky at 9 a.m. CDT before taking on the host Mountaineers to close tournament play at 6 p.m. Both matches can be heard live on WVUR, 95.1 FM, Valparaiso and online at www.valpoathletics.com, which will also have links for live stats.