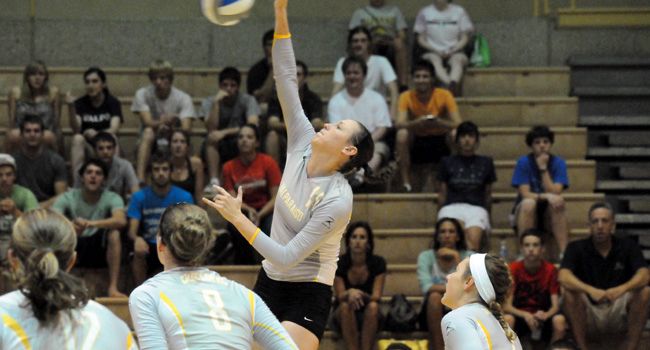 A tight first set against the Racers turned in Valpo’s favor early on, as a quick four-point spurt gave the Crusaders a 9-5 advantage, a lead which it would not relinquish.  Murray State hung around for a while, closing to within 15-13, but from there Valpo closed the frame on a 10-2 run, highlighted by three kills and a block from sophomore Janelle Hobbs (Hartland, Wis./Arrowhead).

Another early four-point run gave Valpo control of the second set, as Hobbs tallied a pair of blocks, while sophomore Sarah Dooms (Greenwood, Ind./Center Grove) registered a kill and a block as well to help the Crusaders gain an 8-3 edge.  The lead would not fall below four points the rest of the way, with a kill by sophomore Mary Dent (Chicago, Ill./Von Steuben) eventually giving Valpo the two sets to none lead.

The third set was all Crusaders, as Valpo hit at an astounding .632 clip (12 kills, 19 swings, 0 errors) for the frame while holding Murray State to -.034 hitting at the same time.  Valpo never trailed in the set, pushing the lead out to double digits as early as 15-5.  Sophomore Ariel Cudney (LaPorte, Ind./LaPorte) closed out the match on the serve, tallying back-to-back service aces to cinch the Valpo victory.

It was a balanced team effort for the Crusaders against the Racers, as Dent led the way with just eight kills.  As a team, Valpo totaled 37 kills while hitting .315 for the match.  Hobbs added six kills, while senior Amy Groesbeck (Wheaton, Ill./North) picked up kills on each of her four swings.  Senior Jenny Pokorny (Geneva, Ill./Geneva) dished out 25 assists, while junior Taylor Root (Jenison, Mich./Jenison) led the Crusaders with 12 digs.  Hobbs and redshirt freshman Lindsey Hauch (Coloma, Mich./Coloma) each tallied four blocks apiece to lead all players.  Murray State (0-4) was led by six kills from Teresa Krog, while Lydia Orf picked up a match-best 14 digs.

“It was great to get every single person into the match against Murray State,” said Crusader head coach Carin Avery.  “They all received significant playing time – at least a full set apiece – and all made good contributions.  Not only were we able to get a lot of players good playing time, but I was happy to see we were able to execute at a really good level with three totally different lineups.”

In the nightcap, Ball State proved to be too much for Valpo, as the Crusaders were held to just .093 hitting for the match.  The Cardinals got out to a quick 7-1 lead in the opening set and never relinquished the lead, taking the early advantage.

The second set was much more of a back-and-forth affair, featuring nine ties and five lead changes.  A quick three-point spurt nearing the late stages of the set, including a block from Dooms and freshman Morgan Beil (St. Louis, Mo./Marquette) gave Valpo the 19-17 lead.  After the teams traded sideouts, the Cardinals strung together back-to-back points to tie the frame at 20-all.  Kills by Pokorny and senior Katie Britton (Mishawaka, Ind./Marian) were answered by BSU kills, and another kill from Kelsey Brandl gave the Cardinals a 23-22 edge.  Britton answered with a termination of her own, however, to again tie the set at 23-apiece, but a pair of kills by Ball State gave it the 2-0 set lead.

The third set was tight past the midway point, with Ball State holding a narrow 15-13 lead before picking up four straight points to extend the edge to 19-13.  Valpo answered immediately, as a kill from Dooms and a BSU error cut the deficit to 19-15.  Following a Ball State kill, Beil tallied a kill, and then it was Dooms with two more kills to push the Crusaders to within 20-18.  But after the Cardinals used a timeout, they scored three straight points to gain some breathing room and eventually close out the match.

Britton paced Valpo in the nightcap with eight kills, while Dooms added six as well.  Pokorny handed out 26 assists running the Crusaders’ offense.  Root registered a team-best 19 digs, and was joined by Hauch in double figures, as the freshman picked up 10 digs of her own.  Groesbeck led the way with three blocks.  Ball State (5-0) got a match-high 11 kills on .556 hitting from Brendl, seconded by 10 kills on .533 hitting by Kara Bates.

“I honestly believe that Ball State’s experience paid off tonight - they're a very good team,” said Avery.  “They play tremendous defense, ran a really great offense, and we just weren’t a match for them tonight. The disappointing part of match for me was the fact that we made a tremendous amount of unforced errors.  You can't do that no matter who you’re playing against, let alone a very talented team.  On a positive note, we learned a ton about ourselves, and we understand we have a lot of room for growth to reach the level we want to reach.”