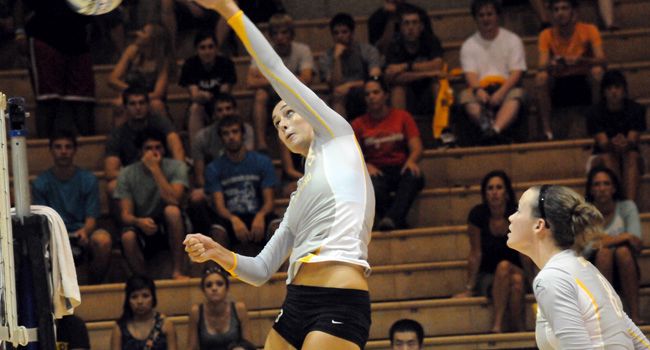 Valparaiso used all facets of the game to earn a pair of victories on Saturday at the ARC, putting forth a stellar defensive effort in a 3-1 (25-14, 26-28, 25-12, 25-20) victory over Texas A&M-CC in the morning before dominating offensively in a 3-1 (26-24, 25-21, 18-25, 25-20) win over Evansville in the afternoon.  The pair of victories gave the Crusaders second place in the Marriott Volley Brawl, while senior Amy Groesbeck (Wheaton, Ill./North) and junior Taylor Root (Jenison, Mich./Jenison) represented Valpo on the All-Tournament Team.

The defensive effort against the Islanders of Texas A&M-CC was easily enough to get the job done in the morning match, especially at the net, as Valpo tallied a season-best 15 blocks.  Freshman Morgan Beil (St. Louis, Mo./Marquette) stood out on the block, as she was in on nine of the blocks to easily set a new career high in just her second weekend of action.  Groesbeck chipped in on five of the rejections as well, just one off of her own career best.

When the ball wasn’t being rejected at the net, the Crusaders’ back line was taking care of business, as Valpo tallied 86 digs in the four-set affair while holding Texas A&M-CC to just 40 kills.  Sophomore Sarah Dooms (Greenwood, Ind./Center Grove) led the way for Valpo with 21 digs, matching her career-best effort in the category, and Root added 20 digs as well.  Both Dooms and senior Jenny Pokorny (Geneva, Ill./Geneva) ended the match with double-doubles, as Dooms added 11 kills to her digs output, while Pokorny recorded 10 digs to go with 40 assists.

The opening set easily went Valpo’s way, as the Crusaders jumped out to a quick 3-0 advantage and never led by less than two as they took the opener.  The second frame looked like it was going in the same direction as well with Valpo leading 18-5, but a 7-1 run by the Islanders cut a bit into the Crusaders’ edge.  Valpo took two of the next three points to push the lead back to 21-13, but from there Texas A&M-CC rattled off nine straight points to cap a 17-3 run and claim the lead.  The Crusaders fought off three set points against them, but Texas A&M-CC converted on the fourth to send the match into the in-game break knotted at one set apiece.

Valpo reasserted itself in the third set, going ahead early 6-2 and this time cruising from start to finish to move to within one set of the victory.  The Crusaders also led for the vast majority of the fourth set, but never pulled away from the Islanders, who were as close as three points late at 23-20.  But a kill by Groesbeck gave Valpo four match points to work with, and sophomore Ellen Vanden Berg (Little Chute, Wis./Little Chute) converted with a kill on the first opportunity to give the Crusaders the match.

While the defense stood out against the Islanders, Vanden Berg dominated offensively, tallying a career-best 12 kills to pace the Crusaders while hitting at a .550 clip.  Beil added nine kills, junior Mary Dent (Chicago, Ill./Von Steuben) eight and Groesbeck seven in the winning effort.  Texas A&M-CC (3-3) received a team-best 10 kills from Tina Chavis, while Micah Nolan led all players with 27 digs.

“Our defense was much improved from Friday night and was a big reason we won,” said Crusader head coach Carin Avery.  “We also did a much better job passing in tempo and defensive transitioning the balls to target, which allowed us to run more offense with our middles.  Morgan and Ellen both really took advantage and were very successful offensively.”

It took Valpo’s second match of the day a half-hour longer than expected to get under away, as during the introduction of the Crusaders’ starting lineups, storms in the area caused the Athletics-Recreation Center to lose power.  After a half-hour delay that featured numerous numbers from the Valpo pep band and an impromptu dance routine from four of Valpo’s sophomores, the lights regained full strength and allowed the Crusaders’ contest with Evansville to begin.

It seemed like Evansville gained the momentum from the delayed start, jumping out to a quick 13-6 advantage and still leading by six at 18-12.  But an 8-2 run tied things up at 20 and set up a back-and-forth final stretch.  A kill by Dooms gave Valpo the 22-21 lead, but five consecutive sideouts followed to make it 24-all.  Pokorny picked up a second-touch kill to give the Crusaders their second set point opportunity, and an Evansville attack error put the opener in Valpo’s column.  The second set proved to be not nearly as suspenseful, as Valpo jumped out to an 8-1 lead, highlighted by two kills apiece from Biel and Dooms, and never let Evansville get any closer than three points from that point forward.

The third set was led by Evansville from start to finish, with only a late 5-0 Valpo run closing the gap as tight as the final margin.  Evansville also led early in the eventual final set, but a three-point spurt turned a 7-6 deficit into a 9-7 lead for Valpo, and the Crusaders never trailed again.  The Purple Aces closed to within one point at 16-15 just past the midway point of the frame, and were still within two points late at 21-19.  But a Groesbeck kill, followed by a UE attack error, pushed the lead to four points, and a kill from Dooms gave Valpo match point.  On its second chance, it would be the freshman Beil who came up with the big play, stuffing Ellen Sawin to clinch the victory.

The Crusaders’ offense was dominant in the nightcap, as Valpo tallied 69 kills over just four sets on .311 hitting.  Dent led the way with 15 kills, while Dooms and Groesbeck added 12 apiece, the latter doing it on .478 hitting.  Vanden Berg chipped in 11 kills on .435 hitting as well.  Pokorny picked up her second double-double of the day with 48 assists and 18 digs, trailing only Root in the latter category as the junior registered a match-best 26 digs.  Dooms recorded 14 digs as well for her second double-double, while sophomore Ariel Cudney (LaPorte, Ind./LaPorte) rounded out four Crusaders in double figures in the category with 10.  Evansville (6-2) was led by 19 kills on .306 hitting and 18 digs by Brooke Maher.

“What was most impressive about tonight was that our focus was on trying to make less unforced errors offensively, and then we went out and were able to hit .311 in a really good four-set match,” said Avery.  “I think that’s really impressive.  We got another scrappy defensive effort, especially in the back row, and again it opened offensive options up with our middles and right sides.  The three of them (Groesbeck, Vanden Berg, Beil) were able to attack and all had fabulous matches for us.”

Groesbeck earned her spot on the All-Tournament Team for her domination on both sides of the ball, hitting at a stellar .424 clip over the four tournament matches while averaging 2.80 kills/set and 1.00 blocks/set.  Root received her nod as she paced Valpo in both digs/set (5.50) and service aces (5 total) over the course of the tournament.  Saturday’s other matches saw Evansville beat Murray State 3-1 and Ball State beat Murray State 3-0.  Ball State then clinched the tournament title with a 3-0 win over Texas A&M-CC in the final match of the Marriott Volley Brawl.

Valparaiso (6-2) takes on its third in-season tournament next weekend, as the Crusaders make the short trip east to Notre Dame for the Golden Dome Invitational.  Tournament action begins Friday, Sept. 9 against Portland at 3:30 p.m., with live audio available on WVUR, 95.1 FM, Valparaiso and online at www.valpoathletics.com.  Live stats and live chat for all three matches can also be accessed through the official Valpo Athletics website.