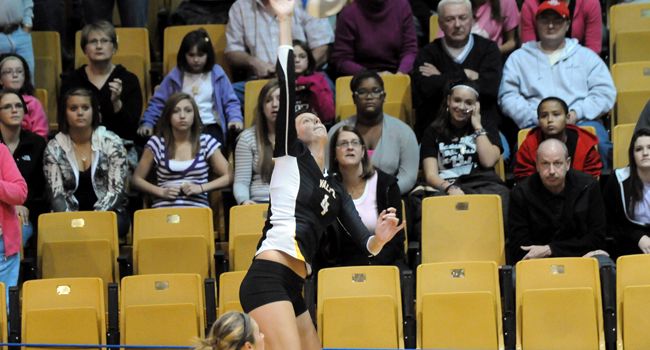 Valparaiso put together a solid offensive team effort, hitting .297 for the match, and came up with key points at the end of all three sets as the Crusaders earned a 3-0 (25-21, 25-23, 25-21) sweep of Portland Friday afternoon in Notre Dame, Ind. “That was probably one of our best matches all year so far, I thought,” said Crusader head coach Carin Avery. “The difference tonight for us was that when we got into close situations late in sets we didn’t make unforced errors, unlike last weekend.” A number of standout offensive performances helped Valpo hit at nearly a .300 clip on Friday. Leading the way was senior Katie Britton (Mishawaka, Ind./Marian), who in a return to her home region led all players with 12 kills while hitting at a .474 clip. Sophomore Sarah Dooms (Greenwood, Ind./Center Grove) also reached double figures, chipping in 10 kills. Sophomore Ellen Vanden Berg (Little Chute, Wis./Little Chute) had a stellar match on the attack for the third straight outing out of the middle, posting seven kills while hitting .462. Senior Jenny Pokorny (Geneva, Ill./Geneva) dished out 37 assists on Friday, surpassing the 2,000 assist mark for her career in the process. Pokorny also added four kills on just seven attacks and tallied seven digs as well. Junior Taylor Root (Jenison, Mich./Jenison) led all players on the back line with 16 digs, and was helped in the back by sophomore Ariel Cudney (LaPorte, Ind./LaPorte), who registered 10 digs as well as a season-best four service aces. Vanden Berg, senior Amy Groesbeck (Wheaton, Ill./North) and freshman Morgan Beil (St. Louis, Mo./Marquette) each were in on three of Valpo’s six total team blocks. The first set would be the tightest of the three frames, featuring 14 ties and seven lead changes just by itself. Neither side was able to gain more than a two-point advantage through the early and middle stages of the set, and the 14th tie of the set came at 20 apiece. Groesbeck picked up a kill to give Valpo the lead back at 21-20, followed by Cudney’s second ace of the set to push the lead to two points. Vanden Berg followed with a kill of her own to force a Portland timeout. After the Pilots sided out post-stoppage, Vanden Berg came up big with a solo block to give the Crusaders set point, and a Pokorny kill gave Valpo the one-set advantage. The second frame looked like it would be easier to close out for the Crusaders, as a mid-set four-point spurt capped by a Root service ace pushed Valpo’s lead to 15-10. Later in the set, Cudney picked up yet another ace as the Crusaders led 21-15. Following a pair of Portland points, Dooms and Beil registered back-to-back kills to move Valpo within two points of the set win. But a 4-0 Portland run closed the gap to one point and forced the Crusaders to utilize a timeout to slow the Pilots’ momentum. Out of the timeout, a Portland miscue gave Valpo two set points, and Beil closed out the set on the second opportunity with a kill. The third set featured a number of mini-spurts by the Crusaders, as Valpo kept trying to push the advantage beyond two or three points. But each time, Portland would answer to stay within striking range of the Crusaders. With the score 19-19 late in the set, Britton tallied the last of her 12 kills, Cudney followed with another ace and Groesbeck added a kill of her own to make it a three-point lead. A service error moved Portland to within 22-20, but a kill from Vanden Berg and a big block from Beil and Groesbeck moved the Crusaders to the verge of the sweep. On its second chance at the win, Dooms came through with the kill to give Valpo its third straight win. The Crusaders matched a season-best with their seven service aces Friday, while their offensive effort was helped by the fact they committed just four unforced attack errors. Portland (3-6) was led by nine kills on .467 hitting from Kati Hronek, while Jacqueline Rodriguez posted a team-best 13 digs. Marissa Plummer chipped in on four of the Pilots’ eight team blocks. “I thought we really did a good job in serve receive,” said Avery. “Jenny did a good job distributing the ball, and we didn’t make many errors, which is something we’ve been working on. I also thought we served aggressively and took Portland out of its rhythm.” Valparaiso (7-2) returns to action Saturday afternoon as the Crusaders take on Lipscomb in their second match of the tournament. First serve is slated for 3:30 p.m. CDT, with all the action available live on WVUR, 95.1 FM, Valparaiso. Live stats will also be available through www.valpoathletics.com.