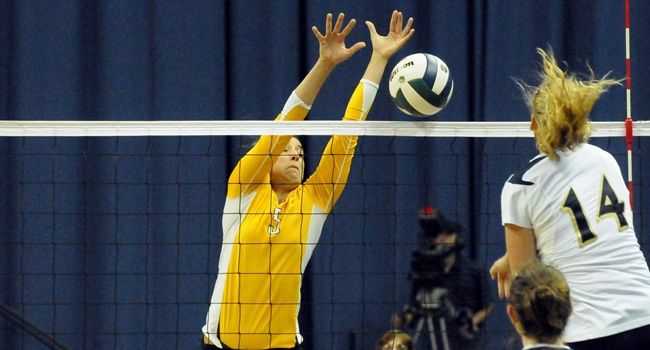 Valparaiso battled on Notre Dame’s home court with the host Fighting Irish in the finale of the Golden Dome Invitational Sunday afternoon, but in the end, it was Notre Dame defeating Valpo by a 3-0 (25-20, 25-21, 25-21) count.  Freshman Morgan Beil (St. Louis, Mo./Marquette) represented the Crusaders on the All-Tournament Team.

The Crusaders put up a strong defensive effort Sunday, out-blocking the Fighting Irish 10-8 and falling just one dig short of Notre Dame’s output (74-73).  Five different Valpo players were in on at least three blocks, while four different Crusaders reached double figures in digs.

But the offensive output was the difference, as Notre Dame out-killed the Crusaders by a 47-33 margin.  In addition, Valpo hit just .074 for the match, committing 23 total attack errors, while the Fighting Irish hit at a .218 clip.

“It was a great defensive match on our part; I thought our blocking and overall defense was very good,” said Crusader head coach Carin Avery.  “But the problem was that we didn’t have one player hit above .200, and didn’t even get to .100 as a team in any set.  You’re obviously not going to beat many teams when you have an offensive output like that.  You have to give Notre Dame some credit, because their blocking and defense were also very good and forced us into making a lot of errors.  But if we had even been able to put up a decent attacking percentage, then it could have been a different outcome.”

The first set contained the most back-and-forth action between the two squads, featuring seven ties and four lead changes.  The Crusaders jumped out to an early 6-3 advantage and still led by a score of 9-7 after back-to-back blocks, the first a solo effort by sophomore Sarah Dooms (Greenwood, Ind./Center Grove) and the second a combination effort from senior Jenny Pokorny (Geneva, Ill./Geneva) and sophomore Ellen Vanden Berg (Little Chute, Wis./Little Chute).

A 6-1 Notre Dame run gave the Irish a 13-10 lead, however, and the teams then traded a trio of sideouts to make it 16-13.  But the Crusaders strung together four straight points to retake the advantage at 17-16, including kills by Dooms, Vanden Berg and senior Amy Groesbeck (Wheaton, Ill./North).  Notre Dame responded with five straight points of its own, though, and eventually converted on its third set point opportunity to take the opener, 25-20.

A five-point run after Valpo took the opening point of the second set gave the Irish a 5-1 advantage, but the Crusaders slowly chipped away at the deficit, tying it at 11-all on a service ace by junior Taylor Root (Jenison, Mich./Jenison).  Valpo was never able to gain the outright lead, but stayed within striking distance for the remainder of the set.  The Crusaders closed to within one on three separate occasions, the last on a setter dump for a kill by Pokorny at 22-21, but  Notre Dame scored the last three points of the frame to take a 2-0 advantage into the in-game break.

A back-and-forth first half of the third set turned into a more significant Irish advantage, as the Crusaders surrendered four straight points to turn a 13-12 deficit into a 17-12 deficit.  Valpo scored five of the next eight points to trim the lead down to three points, only to watch Notre Dame register four of the next five to make it 24-18 and give the Irish a myriad of match points.  A kill by senior Katie Britton (Mishawaka, Ind./Marian), followed by a Pokorny ace saved two of the opportunities, and Britton then combined with redshirt freshman Lindsey Hauch (Coloma, Mich./Coloma) on a block to cut the lead to 24-21.  But Notre Dame’s Jeni Houser terminated on the next point to end the contest.

Dooms paced Valpo with 10 kills, the only Crusader to hit double figures on the afternoon.  The sophomore added 14 digs for her fifth double-double of the year, while Pokorny registered her sixth-such outing with 27 assists and 16 digs to go along with four blocks.  Root led the way on the back line for Valpo with 17 digs, while Britton and Vanden Berg each joined in on four blocks as well.

“I did think that all our girls played very hard today,” said Avery.  “Honestly, in the end, we were just a couple unforced errors and a couple great terminations on their part from being able to take a set.”

Houser led Notre Dame (5-3) with 12 kills on Sunday, supported by 11 kills off the hands of Andrea McHugh.  McHugh also matched Frenchy Silva with 19 digs apiece, as the duo shared match-high honors in that category.

Beil earns the first All-Tournament accolade of her young career after totaling 12 blocks over the three tournament matches, tied for tops by a Crusader player and tied for third among the entire tournament field.  The Horizon League’s current leader in blocks/set, Beil also contributed 2.40 kills/set offensively and swung at a .255 clip over the three matches, both also among the tournament’s top-10.

Valparaiso (7-4) gets an early start to Horizon League play this season, stepping into a single league match on Wednesday evening at the ARC against UIC.  First serve is slated for 7 p.m., and all the action can be heard live on WVUR (95.1 FM, Valparaiso) or seen online on the Horizon League Network via www.valpoathletics.com.  The official Valpo athletics website will also have a link for live stats as well.