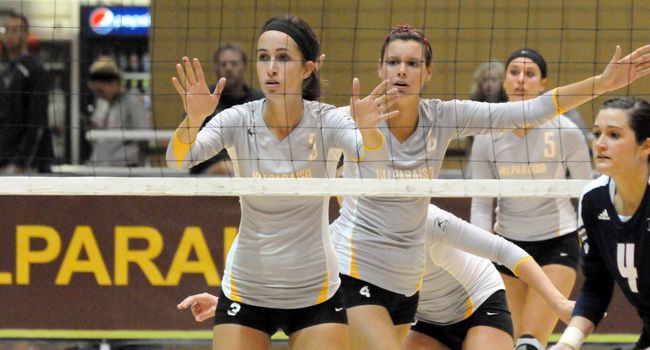 “I was proud of our team tonight because I thought we started kind of sluggish and we eventually turned things around,” said Crusader head coach Carin Avery.  “We were coming off a tough weekend, and had just played on Sunday before turning around tonight for a weekday game.  Not to make excuses, but I knew this would be a tough match for us.  I’m just really proud of our girls for hanging in there and coming up with a big win after a tough stretch on our schedule.”

Beil tallied six of her kills on just seven swings to help Valpo take the opening set, the closest of the evening.  The rookie got plenty of help offensively as well, as the Crusaders totaled 47 kills on .262 hitting in the sweep.  Senior Katie Britton (Mishawaka, Ind./Marian) also had a stellar night on the attack, registering 11 kills while committing just one attack error and swinging at a .333 clip.  Senior Jenny Pokorny (Geneva, Ill./Geneva) handed out 35 assists running the Crusaders’ offense.

Almost as impressive was Valpo’s effort on the back line.  The Crusaders easily out-dug the visiting Flames, 77-55, and it was a total team effort in the back, as five different Valpo players reached double figures in the category.  Sophomore Sarah Dooms (Greenwood, Ind./Center Grove) led the way with 19 digs, while junior Taylor Root (Jenison, Mich./Jenison) added 18 digs of her own.  Redshirt freshman Lindsey Hauch (Coloma, Mich./Coloma) contributed 12 digs, Pokorny posted 11 and sophomore Ariel Cudney (LaPorte, Ind./LaPorte) rounded out the quintet with 10 digs.

“I thought we took care of the ball extremely well tonight,” said Avery.   “When you’re able to take care of the ball at that level, you can get your middle the ball quite a bit, and we did that with Morgan tonight, who absolutely played outstanding.  Also, when you dig the ball 77 times, you're going to frustrate a lot of teams.  I was happy to see those numbers, because coming in tonight, that was what we were focusing on.”

Not only was the first set the closest of the evening, but it also featured the most back-and-forth action, as the two squads combined for ten ties and four lead changes.  Valpo led early, but a four-point UIC spurt gave the Flames a 9-6 edge.  Still trailing 13-10, the Crusaders utilized a pair of Beil kills along with two UIC errors to retake the lead at 14-13.

After trading sideouts, UIC put up three points in a row to go ahead by a 17-15 count.  The Flames still held the lead at 20-18 when a Dooms kill brought Valpo back to within one.  Dooms then stepped back to the service line and served all the way up to set point, as the Crusaders ultimately went on a 6-0 run.  Kills by Britton and sophomore Ellen Vanden Berg (Little Chute, Wis./Little Chute) started the spurt, leading to a UIC timeout.  After the stoppage, the Flames committed an attack error, and then Vanden Berg blocked a back-row attack by UIC’s Kelsey Safranek to make it 23-20.  Another kill by Britton left Valpo on the verge of taking the opener, and Dooms terminated a ball from the attack line on the Crusaders’ second opportunity to close the frame.

“I thought the difference was that we started getting a much better rhythm as a team at the end of the first set,” said Avery.  “Then we were able to carry that into the second set as well.  Our defense was outstanding tonight and took UIC out of their game; that was the key.”

The second set was also tight in the early going, with both squads putting together multiple three and four point spurts trying to gain control.  It was all tied up at the midway point at 13 apiece, but that was when the Crusaders went on a 7-2 run to seize the momentum.  Four different Valpo players picked up kills during the run, including a pair by Britton, as the Crusaders were up 20-15.  UIC would get no closer than four points the rest of the way, with a Flames attack error eventually sending the match into the mid-game break in Valpo’s favor 2-0.

The third set was over almost before it even began, as the Crusaders immediately ran out to a quick 10-1 lead.  Pokorny found all types of ways to contribute to the big spurt, tallying an assist, a kill, a solo block and a service ace during the run, while Root also picked up an ace during the opening stretch.  Another 7-0 run mid-set, featuring a pair of kills from sophomore Janelle Hobbs (Hartland, Wis./Arrowhead), staked Valpo to a 19-6 lead, and the Crusaders cruised from there, ending the sweep on a second-touch kill by Pokorny.

UIC (6-4, 0-1 Horizon) was held to just .094 hitting on the evening by the Crusaders’ defense.  The Flames were led by 10 kills from Safranek, who also registered 10 digs for a double-double, while Maggie Strus paced her team with 14 digs and a pair of aces.

Valparaiso (8-4, 1-0 Horizon) faces one more early-season tournament this weekend, making the short trip to Chicago for the DePaul Invitational.  Tournament action begins Friday night against the host Blue Demons at 7:30 p.m., with live stats available through www.valpoathletics.com.  You can also hear the game locally on WVUR, 95.1 FM, Valparaiso.