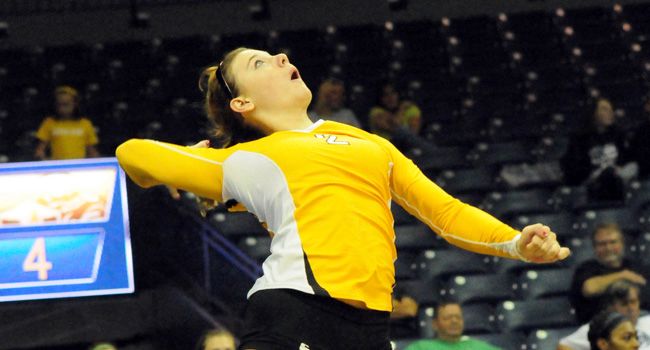 Valparaiso had little trouble in its first match of the DePaul Invitational in Chicago, Ill. Friday evening, dispatching of the host Blue Demons in three straight sets (25-14, 25-8, 25-20).

“We played really well as a team tonight,” said Crusader head coach Carin Avery.  “We attacked the ball well, and we served very, very aggressively.  We did a great job of really taking DePaul out of system and were able to take advantage of that all night.”

While Valpo never outright trailed in the opening set, the frame was tied twice in the early stages, including at 7-all.  At that point, however, the Crusaders went on a 12-3 run to bust the set open, punctuated by aggressive serving that resulted in a multitude of service aces.  An ace by sophomore Sarah Dooms (Greenwood, Ind./Center Grove) gave Valpo a 10-7 lead and led to a DePaul timeout, while an ace by junior Taylor Root (Jenison, Mich./Jenison) made it 12-8.

Later in the run, sophomore Ariel Cudney (LaPorte, Ind./LaPorte) strung together three straight aces to push the lead from 15-10 to 18-10 and put the set effectively out of reach.  Fittingly enough, another ace by Dooms would eventually end the set, giving the Crusaders an astonishing seven service aces in the first set alone.

While it was the service game that propelled Valpo to the victory in the opener, the offense was just as impressive in the second set.  The Crusaders tallied 15 kills in the frame while committing just one attack error, hitting at a .538 clip.  An early 6-3 lead for Valpo extended to 14-3 after an 8-0 run on the serve of Root, and two points later, the Crusaders started another 6-0 run to run away with the frame.  A kill by senior Amy Groesbeck (Wheaton, Ill./North) eventually ended the set, giving Valpo the 2-0 lead into the in-game break.

The third set was the tightest of the evening, featuring 11 ties and six lead changes.  For the first time all evening, DePaul led the set into the second half, and actually held the lead outright at 15-14.  The Blue Demons then were tied with the Crusaders at 16-all before a three-point spurt, featuring a kill by Dooms and a solo block from sophomore Janelle Hobbs (Hartland, Wis./Arrowhead), gave Valpo a 19-16 edge.

Valpo was unable to pull away until late, as DePaul was still within one at 21-20.  But kills by junior Mary Dent (Chicago, Ill./Von Steuben) and sophomore Ellen Vanden Berg (Little Chute, Wis./Little Chute) pushed the Crusader advantage to three, and back-to-back DePaul errors handed the sweep to Valpo.

Dooms paced the Crusaders with 11 kills on .364 hitting, while Dent and Hobbs each added seven kills apiece.  No Crusader attacker finished the night with a hitting percentage under .231.  Senior Jenny Pokorny (Geneva, Ill./Geneva) handed out 34 assists on the evening.  Cudney ended the night with a match-high four of Valpo’s nine service aces, while Root led all players in the back row with 15 digs.

Amy Lanski led the DePaul (3-8) effort with seven kills, but the Blue Demons were able to hit at just an .089 clip for the match.  Kelsey Bowler tallied 14 digs in the losing effort.

Valparaiso (9-4) closes out play at the DePaul Invitational on Saturday afternoon with a pair of matches.  The Crusaders face Kansas at 1:30 p.m. before taking on San Diego State at 5 p.m.  Both matches can be heard live on WVUR, 95.1 FM, Valparaiso and online at www.valpoathletics.com, which will also have links for live stats and a live chat for both contests.