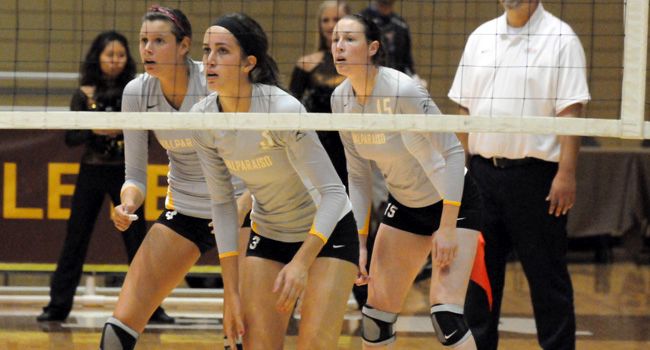 This Week in Crusader Volleyball: Valparaiso hosts a pair of Horizon League matches this Homecoming weekend, welcoming Wright State on Friday night before taking on Butler on Saturday evening.  The pair of contests at the ARC begins a stretch in which the Crusaders will play six out of their next eight matches at home.

Wrapup of Last Week: The Crusaders started off Horizon League road play Friday night at Green Bay, falling to the Phoenix 3-0.  Valpo rebounded on Saturday with a 3-0 sweep at Loyola to earn a split of the weekend trip.

Following the Crusaders: Live video streaming of both of the Crusaders’  matches this weekend will be available through the Horizon League Network, with a link available at www.valpoathletics.com.  Live audio of the Butler match on Saturday can also be heard on WVUR (95.1 FM, Valparaiso) and online at valpoathletics.com as well.  In addition, live stats will be available for both of Valpo’s matches this weekend as well.

Head Coach Carin Avery: Carin Avery enters her tenth season at the helm of the Crusader volleyball program having experienced nothing but success at head coach.  Avery is 232-87 (.727) in her nine-plus years at Valpo and owns a 287-111 (.721) record overall in 11-plus years as a head coach.  She ranks among the top-20 winningest active coaches in Division I volleyball by winning percentage and is Valpo’s all-time leader in both wins and winning percentage.

Bouncing Back After Sweeps: Valpo rebounded nicely from its 3-0 defeat at Green Bay Friday night, coming back less than 24 hours later to win 3-0 at Loyola.  The Crusaders have now won all four times this season next time out after suffering a 3-0 defeat and are 6-0 over the last two years in such matches.

Block or Be Blocked: Just taking a look at the block numbers from both of last weekend’s matches gives a lot of insight into the respective results.  The Crusaders, who entered the weekend averaging better than two blocks per set, managed just a season-worst one block in the loss to Green Bay before recording 13 in the win over Loyola, tied for their second-best effort this year.  On the flip side, Valpo, which had been blocked more than eight times just once all year, saw the Phoenix pick up 15 blocks on Friday night before getting blocked just eight times against the Ramblers.

Home Is Where the Wins Are: With six of their next eight matches at home, all of which are Horizon League contests, the Crusaders will be looking towards their home court advantage to help pile up the wins.  Valpo is already 4-1 this season at the Athletics-Recreation Center, keeping pace with its all-time winning percentage at the ARC under Carin Avery, which currently stands at .827 (86-18).

Beil Picks Up Honor: Freshman Morgan Beil became the second Crusader to earn a weekly award from the Horizon League office this season on Sept. 19, picking up Offensive Player of the Week honors after averaging three kills per set on .403 hitting over the four matches last week.  Beil’s week was highlighted by a team-best 12 kills in the sweep of UIC on .688 hitting, the best performance by a Horizon League hitter in league-only action so far this season.  Previously, junior Taylor Root earned defensive weekly accolades the first week of the season, her sixth career honor from the league office.

Vanden Berg With the Rejections: Sophomore Ellen Vanden Berg enjoyed easily the best match of her young career defensively Saturday against Loyola.  Vanden Berg, who entered the match with a career single-match high of five blocks, tied that mark in the first set alone with five rejections.  The sophomore eventually ended the night with nine blocks, setting a new career high and tying for Horizon League single-match high honors so far this year.  Vanden Berg is now averaging 0.96 blocks/set on the year, good for fifth in the league.

Root Keeps On Digging: Junior Taylor Root continued to pace the Horizon League in digs with an average of 5.14 digs/set, good for 29th nationally.  Root led all players at Green Bay last Friday with 21 digs in just three sets and tied for team-high honors against Loyola with 13 digs.  Root, who has now reached double figures in the category in 16 of Valpo’s 17 matches this year, now has 1,638 total digs and is now just 249 digs shy of Sara Silcox for the second spot on the Crusaders’ all-time digs chart.

Dooms Leads the Way: Through Valpo’s first 12 matches of the season, five different players paced the Crusaders in kills.  But over the last five contests, sophomore Sarah Dooms has outright led the Crusaders four times and tied for team-high honors in the other match.  Dooms paces the Crusaders with 2.62 kills/set on the season and has reached double figures nine times, including 13 kills on .345 hitting in the win over Loyola.  She also registered 13 digs against the Ramblers for her seventh double-double of the year.

Pokorny Does It All: Senior Jenny Pokorny has been a standout at all facets of the game from her setter position, and the match she had Saturday against Loyola was a microcosm of her entire skill set.  The senior handed out 26 assists in the sweep, but did plenty else to contribute to the win.  Chief among her contributions were four service aces, three of which rallied Valpo from a 24-20 deficit in the second set.  Pokorny also recorded six kills on just 11 attacks, hitting .545, while also picking up seven digs and three blocks.