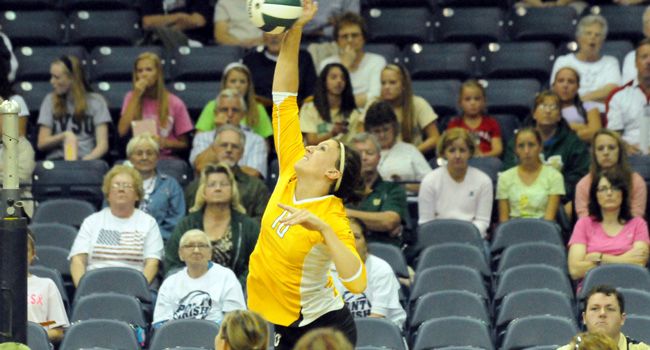 The Crusaders posted their best hitting percentage of the year on Friday, swinging at a .366 clip thanks to 39 kills against just nine errors.  Perhaps most impressively, it was a total team effort, as nine different Valpo attackers posted at least two kills apiece, led by a perfect match from redshirt freshman Lindsey Hauch (Coloma, Mich./Coloma), who posted seven kills on as many swings to hit 1.000 for the match.

“Lindsey really did a great job making the most out of her swings tonight,” said Crusader head coach Carin Avery.  “It’s been quite a while since we’ve had somebody hit 1.000 for an entire match.”

“Our offense really executed at a high level tonight,” said Avery.  “When as a team, you have multiple attackers who avoid committing errors, you’re going to have a successful night.”

Valpo jumped out on top quick in the opening set, getting a kill from senior Jenny Pokorny (Geneva, Ill./Geneva), who also combined with freshman Morgan Beil (St. Louis, Mo./Marquette) on a block in a four-point run to start the match.  Then, with the score 7-4, Hauch sided out with a kill and sophomore Ariel Cudney (LaPorte, Ind./LaPorte) stepped back to the service line.  By the time the Raiders sided out next, Cudney has served seven straight points, including a pair of aces, to push the Valpo advantage to 14-4, and WSU never got closer than eight points the rest of the way.

The second set remained closer deeper into the frame, as Wright State answered a three-point Valpo spurt with three straight points of its own to close within 15-12.  But a Raider hitting error gave the serve back to the Crusaders, and Pokorny proceeded to serve six straight points to put the set out of reach.  The senior tallied a pair of aces during the key stretch, while Beil and Dent each picked up kills as well.

Just like the previous set, the third and ultimately final frame featured a big run by the Crusaders just past the midway point.  The Raiders were within two at 15-13 when a service error sparked an 8-0 Valpo run to pull away.  Hobbs and Pokorny combined for a pair of blocks during the run, with the latter also picking up another kill as the Crusaders went up double digits.  A kill by Dent eventually ended the match in Valpo’s favor.

Pokorny handed out 31 assists on Friday night as she set the Crusaders to their season-best hitting percentage.  Cudney tallied a team-best three aces as Valpo totaled nine as a team, while junior Taylor Root (Jenison, Mich./Jenison) led the Crusaders on the back line with 11 digs.  Hobbs paced the Valpo effort at the net with four blocks.

Valparaiso (12-6, 3-1 Horizon) turns around for a 5 p.m. match on Homecoming Saturday against Butler at the ARC.  All the action can be seen live on the Horizon League Network or heard live on WVUR, 95.1 FM, Valparaiso, with links for both available at www.valpoathletics.com, which will also have a link for live stats.