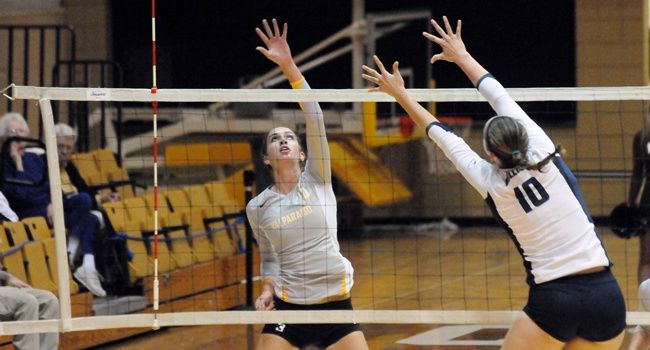 The Crusaders utilized a large advantage in the kills category to down the Bulldogs, totaling 62 kills over the four sets to just 46 for Butler.  The total team effort was led by freshman Morgan Beil (St. Louis, Mo./Marquette), who registered a new career high with 15 kills on .333 hitting.  She got plenty of help though, as seven different Valpo attackers picked up at least six kills on Saturday.

“Given the number of errors that we committed offensively and Butler's blocking, it was good to see we still found a way to end rallies with kills,” said Crusader head coach Carin Avery.  “That was really the key to the match, that we were able to actually terminate a lot more balls, even with all our errors.”

Valpo's effort in the back row also dominated the Bulldogs, as the Crusaders held an 88-72 advantage in the digs category.  Junior Taylor Root (Jenison, Mich./Jenison) and redshirt freshman Lindsey Hauch (Coloma, Mich./Coloma) paced all players with 21 digs apiece, the latter easily setting a new career best in the category.

The opening set was tight passing the halfway point, as Butler was still within one point at 15-14.  But a Bulldog service error and a service ace by senior Jenny Pokorny (Geneva, Ill./Geneva) pushed the Crusader lead to three points, and back-to-back kills by Hauch made it 19-14 Valpo.  With the Bulldogs within three late at 22-19, sophomore Sarah Dooms (Greenwood, Ind./Center Grove) and Beil tallied consecutive kills to give the Crusaders five set points, and a kill by junior Mary Dent (Chicago, Ill./Von Steuben) ended the opener in Valpo's favor.

The second set was back-and-forth in the early going, at one point featuring 11 straight side outs by the two squads.  But with the score tied at 11 apiece, Butler ran off six of the next seven points to go ahead by a 17-12 count.  The Crusaders would get no closer than four points the rest of the way, as the match went into the in-game break tied at a set apiece.

A pair of early service aces by sophomore Ariel Cudney (LaPorte, Ind./LaPorte) helped spark an 8-3 spurt to put the Crusaders in position to control the remainder of the third set.  Valpo maintained a multi-point margin throughout the entirety of the frame, and at 16-12, a pair of kills apiece from Beil and Pokorny pushed the lead up to eight points.  The Crusaders eventually ended the set on a 5-1 run, capped by a Beil service ace, to go up two sets to one.

A big mid-set run would be the key to the Crusaders taking the fourth set and earning the match victory.  Leading 11-8, back-to-back kills by senior Amy Groesbeck (Winfield, Ill./Wheaton North) followed by a Butler attack error forced the Bulldogs to use a timeout at 14-8.  Out of the stoppage, Dooms came up with a kill, and two more Butler errors gave the Crusaders a 17-8 advantage.  Valpo cruised from there, eventually closing the match on a kill by senior Katie Britton (Mishawaka, Ind./Marian).

Britton and Dooms tied for second on the team with nine kills apiece, the former doing it on .333 hitting.  Pokorny approached a triple-double as well on Saturday with her work on both sides of the ball, tallying 44 assists, a season-best 19 digs and seven kills on .300 hitting.  For the second straight night, Valpo totaled nine service aces, led by three from Beil.

“I thought we also did a good job on the service line tonight,” said Avery.  “Not only with the fact that we had nine aces, but I thought even when we didn’t ace them, we took Butler out of tempo quite a bit.”

Butler (5-12, 1-4 Horizon) was led by ten kills each from Maureen Bamiro and Belle Obert.  Brooke Ruffolo tied for match-high honors as well with 21 digs, while Bamiro and Maggie Harbison were both in on five of the Bulldogs' 12 total blocks.

Valparaiso (13-6, 4-1 Horizon) hits the road for a key mid-week Horizon League contest Wednesday night at league leader Milwaukee.  First serve is set for 7 p.m., and the match can be heard live on WVUR, 95.1 FM, Valparaiso and seen via the Horizon League Network, with links for both available at www.valpoathletics.com.  Links for live stats and a live chat will also be available through Valpo's athletic website.