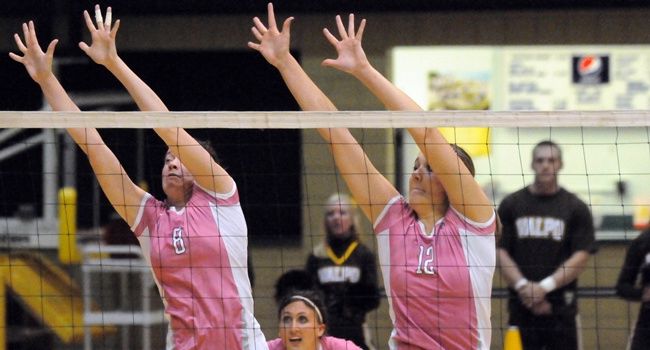 The Valparaiso volleyball team closed out the first half of Horizon League play on a high note Sunday afternoon at the ARC, sweeping visiting Youngstown State 3-0 (25-15, 25-19, 25-18).

“It’s always great having a game the next day after you have a tough loss the night before,” said Crusader head coach Carin Avery.  “I think we were hungry to get back on the court and get back on the winning track today.”

The first set was decided by a big early run, as a 3-2 deficit turned into a 13-5 lead thanks to an 11-2 spurt.  Nine of Valpo's 11 points during the decisive run were registered on kills, including three each from freshman Morgan Beil (St. Louis, Mo./Marquette) and senior Katie Britton (Mishawaka, Ind./Marian), as well as a pair by senior Jenny Pokorny (Geneva, Ill./Geneva).  YSU would close back to within four points at 14-10, but four straight points for the Crusaders gave them breathing room, and Valpo would eventually end the opener on a block by Beil and Pokorny.

Neither squad could gain control of the second set, as the teams traded leads through the early stages.  Leading 12-11, Valpo put together three straight points on a kill by Dooms and then back-to-back blocks, both of which featured sophomore Ellen Vanden Berg (Little Chute, Wis./Little Chute).  But the Penguins answered with three straight points of their own to move back to within one point.  Finally, with Valpo's lead at just 19-17, a kill by sophomore Sarah Dooms (Greenwood, Ind./Center Grove) sparked a 5-0 run.  Dooms picked up another kill later in the run and also teamed up with sophomore Janelle Hobbs (Hartland, Wis./Arrowhead) on a block during the spurt as well.  A kill by Beil on Valpo's third set point chance sent the Crusaders into the in-game break up two sets to none.

Youngstown State led through the early part of the third set, and even when Valpo did gain the lead, the Crusaders were unable to push their lead past two points.  The Penguins actually reclaimed the advantage at 17-16 with three straight points, but it was all Valpo from that point.  A kill by Pokorny started a 6-0 Crusader run, also featuring a kill by Vanden Berg and an ace from Dooms, to put Valpo ahead 22-17.  Then, after a Valpo service error, the Crusaders rattled off the final three points of the match, ending the sweep on an ace by junior Taylor Root (Jenison, Mich./Jenison).

The Crusaders' offensive balance was evident again on Sunday, as Dooms and junior Mary Dent (Chicago, Ill./Von Steuben) tied for team-high honors with just seven kills each, the latter doing it on .312 hitting.  Seven different Valpo players ended the afternoon with between four and seven kills.  Pokorny dished out 29 assists, while Root led Valpo's back-row effort with 18 digs.  The Crusaders totaled nine team blocks on Sunday, with Vanden Berg chipping in on seven of them, including a pair of solo efforts.

Youngstown State (2-18, 1-7 Horizon) was led by a match-best nine kills from Missy Hundelt.  Hundelt also led the Penguins with 15 digs, while Bri Kern added 10 digs of her own.

“This was a super tough week for everybody in the league with the mid-week matches, and I’m extremely glad it's over,” said Avery.  “We’re excited to start the second half of the league season.  I think we've learned a lot about ourselves as a team through the first half, and now we’re looking forward to working towards improvement that will help keep us near the top of the league.”

Valparaiso (14-8, 5-3 Horizon) has a light week upcoming, with just a Friday night match at UIC on the docket.  The Crusaders' first serve against the Flames is slated for 7 p.m., and all the action can be heard live on WVUR, 95.1 FM, Valparaiso or seen live on the Horizon League Network.  Links for both broadcasts, as well as live stats and a live chat, will be available at www.valpoathletics.com.