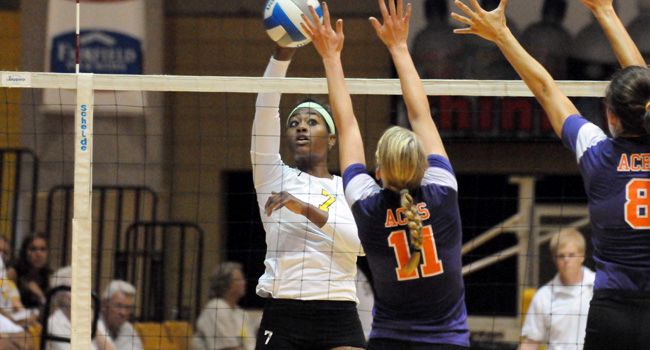 Valparaiso used an early run in set one, a mid-set run in the second frame and a late spurt in the finale to propel itself to a clean 3-0 (25-16, 25-13, 25-21) sweep of UIC Friday night in Chicago, Ill. to start the second half of Horizon League play.

The Crusaders wasted no time asserting themselves at the start of the first set, as an attack error gave Valpo the first point and then redshirt freshman Lindsey Hauch (Coloma, Mich./Coloma) served the next six points as the Crusaders went ahead 7-0.  Sophomore Ellen Vanden Berg (Little Chute, Wis./Little Chute) had a pair of solo blocks during the opening spurt and also added a kill as well.

Valpo quickly extended the lead to double digits as junior Mary Dent (Chicago, Ill./Von Steuben) picked up a pair of kills to help increase the lead to 12-2.  The lead grew to 11 points on multiple occasions, as late as 16-15, and the Crusaders easily rolled to the set win from there, eventually ending the opener on a termination of an overpass by Dent.

UIC hung around in the opening stages of the second set, as the Flames were within one at 7-6.  Three straight points on kills by freshman Morgan Beil (St. Louis, Mo./Marquette), Hauch and Dent pushed the Valpo lead to four at 10-6, but the Flames wouldn’t let the Crusaders pull away at that point, hanging atound at 12-9.

Another Dent kill sent the junior back to the service line with a 13-9 lead, and Dent, who had served just twice all year entering the match, served five straight Valpo points.  Vanden Berg combined with senior Katie Britton (Mishawaka, Ind./Marian) on a block to start the spurt, while the latter also tallied a pair of kills during the run which gave the Crusaders an impenetrable 18-9 advantage.  A service ace by sophomore Ariel Cudney (LaPorte, Ind./LaPorte) ended a 6-1 set ending spurt and sent Valpo into the in-game break up two sets.

Valpo looked to take control of the third set early with a 4-1 start to the frame, but UIC quickly responded to set up a back-and-forth set which would feature 11 ties and six lead changes.  The Crusaders led by two at 14-12, but the Flames had one more run left in them, scoring six of the next seven points to take an 18-15 advantage and force Valpo to use its first timeout of the night.

Out of the stoppage, the Crusaders came out with a renewed energy, especially on the defensive side at the net.  Britton picked up a kill to stop the Flames’ momentum, and then Beil and Hauch combined on back-to-back blocks to tie the set at 18-all.  A UIC kill was answered by an improbable third block by the pair of freshmen, tying the frame at 19 apiece.

A service error gave UIC the lead again at 20-19, but then the Valpo offense stepped up, as kills by Beil and then Dent put Valpo ahead 21-20 and forced a Flames timeout.  Hauch kept the Crusaders going out of the break with a kill, and the teams then traded sideouts to make it a 23-21 Valpo lead.  Fittingly enough, a pair of blocks would end the match in Valpo’s favor, as Vanden Berg earned a solo block to give the Crusaders match point and then combined with Pokorny on the match-ending rejection.

Dent led the Crusader offensive effort on Friday with 12 kills on .346 hitting, while Britton added 10 terminations.  Vanden Berg chipped in eight kills on .438 hitting.  Pokorny dished out 31 assists on the evening.

Defensively, Valpo tallied 12 blocks in holding UIC (12-8, 5-4 Horizon) to just .061 hitting, including five rejections in the match’s final 12 points.  Vanden Berg was in on a team-best seven of the blocks, including a quartet of solo blocks.  Beil and Pokorny helped on four blocks each, while Hauch tallied three rejections.  On the back line, the Crusaders out-dug the Flames 41-30, getting eight digs each from Cudney, Hauch and junior Taylor Root (Jenison, Mich./Jenison).  Dent added a career-high seven digs as well.

Valparaiso (15-8, 6-3 Horizon) returns to the ARC next weekend for a pair of matches, starting with a 7 p.m. Friday match against Loyola.  The action can be heard live on WVUR, 95.1 FM, Valparaiso and can be seen via the Horizon League Network.  Links for both broadcasts, as well as live stats, will be available at www.valpoathletics.com.