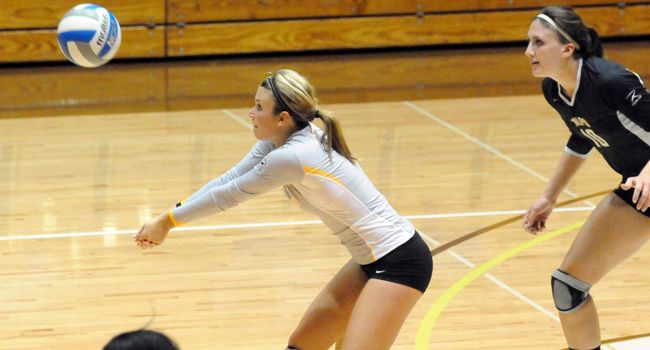 Despite a new career high in digs from junior Taylor Root (Jenison, Mich./Jenison) and a second straight standout offensive performance from freshman Morgan Beil  (St. Louis, Mo./Marquette), Valparaiso could not come out with a victory Saturday afternoon, falling in five sets (25-23, 16-25, 25-23, 20-25, 15-13) to Green Bay at the ARC.

Root tallied 38 digs over Saturday’s five sets, surpassing her previous career best of 35, set last year at Appalachian State.  The 38 digs also matched the second-most digs in a five-set match in Crusader volleyball history, just two digs shy of Valpo’s single-match record.  Meanwhile, Beil hit above .500 for the second straight match, totaling a team-high 17 kills on just 27 swings and committing just two attack errors to end the night at a .556 hitting clip.  The rookie’s .556 hitting percentage was the second-best effort in a five-set match in the category all-time at Valpo.

The sets the Crusaders won featured on Saturday featured big runs, one at the start and one at the finish.  After dropping set one, Valpo came out in the second frame on fire, jumping out to a 14-4 advantage and never letting the lead drop under five points the rest of the way.  Meanwhile, in the fourth set, Valpo trailed 20-19 before rattling off the final six points of the set.  Beil posted a pair of kills and combined with junior Mary Dent (Chicago, Ill./Von Steuben) on a block during the decisive spurt, while a kill by sophomore Janelle Hobbs (Hartland, Wis./Arrowhead) eventually sent the match to a fifth set.

But Valpo was unable to come out on top of any of the three tightest sets Saturday.  The Crusaders led as late as 17-16 in the opener and fought off one set point before succumbing on the second opportunity.  A Beil kill tied the third set at 22-all before the Phoenix scored three of the final four points.  Then, in the finale, Valpo rolled off five straight points mid-set to go ahead by a 9-3 count before Green Bay scored 12 of the match’s final 16 points to earn the victory.

Five Crusaders in all ended up in double figures in the kills department, as sophomore Ellen Vanden Berg (Little Chute, Wis./Little Chute) and redshirt freshman Lindsey Hauch (Coloma, Mich./Coloma) each posted 12 kills while Hobbs and Dent had 10 each.  Senior Jenny Pokorny (Geneva, Ill./Geneva) was one of two Crusaders to register a double-double, finishing the night with 55 assists and 15 digs.  Hauch added 17 digs for a double-double of her own.  Beil tallied a team-best six blocks to go along with her offensive prowess.

Green Bay (9-14, 5-6 Horizon) was paced by 19 kills on .436 hitting from Carmen Leitermann, who also led all players with seven blocks.  Abbey Gitter added 15 kills, while Brittany Groth led the Phoenix with 30 digs.

Valparaiso (16-9, 7-4 Horizon) looks to get back on the winning track as it steps out of Horizon League play for a Tuesday night match at IUPUI.  First serve is slated for 6 p.m. CDT, and all the action can be heard live on WVUR, 95.1 FM, Valparaiso and online at www.valpoathletics.com, which will also have a link for live stats.