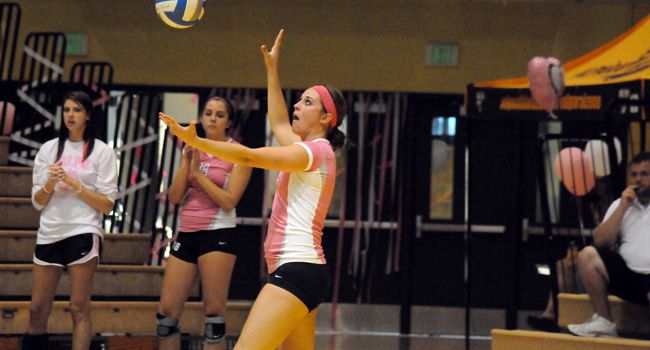 The Crusaders started the opening set by scoring the match’s first five points, but IUPUI responded with six in a row to take the lead.  Trailing 13-12, Valpo posted a 6-1 spurt, including two kills from junior Mary Dent (Chicago, Ill./Von Steuben) to go ahead by an 18-14 count.  The Jaguars closed back to within 19-18, but Valpo scored four of the next five to go up 23-19.

But IUPUI threatened to steal the first set right there, rolling off five straight points to earn set point.  Out of their second timeout of the run, the Crusaders got a big block from Dent and freshman Morgan Beil (St. Louis, Mo./Marquette) to knot the frame at 24-all.  A kill by Dent followed to give Valpo its first set point chance, and the Crusaders converted on another block, this time by senior Jenny Pokorny (Geneva, Ill./Geneva) and sophomore Ellen Vanden Berg (Little Chute, Wis./Little Chute), to take the opener.

Trailing 6-5 in the second set, Valpo reeled off a 9-2 run, featuring two kills each by Beil, Vanden Berg and sophomore Sarah Dooms (Greenwood, Ind./Center Grove), to seemingly take control at 14-8.  IUPUI answered with five straight points to close within one at 14-13, but a pair of kills by sophomore Janelle Hobbs (Hartland, Wis./Arrowhead) were part of a 4-0 spurt that pushed the Crusader advantage to 18-13.  But it was all IUPUI the rest of the way in the second, as the Jaguars scored eight straight points as part of a 12-3 run to take the second set and even the match at one frame apiece.

IUPUI carried its momentum into the third set, jumping out to an 8-1 lead and extending its advantage into double digits at 15-4.  Valpo fought back, getting a trio of kills from Dooms as part of a 10-4 stretch that cut the Jaguar lead to 19-14.  The Crusaders would actually get to within four points on three occasions, as late as a Dooms kill which made it 23-19, but could get no closer as the Jaguars moved within one set of the win.

Unlike the first three sets, which featured a multitude of runs from both sides, the fourth set was nip and tuck the whole way, featuring 14 ties and six lead changes.  Trailing 17-15, Vanden Berg sandwiched a pair of kills around a Pokorny setter dump to put Valpo ahead 18-17, but IUPUI responded with three straight points of its own for a 20-18 edge.  Dent tried to single-handedly give the Crusaders the set win with five kills in the next seven points, pushing Valpo back in front 23-22, but it was not enough, as the Jaguars scored the match’s final three points to earn the 3-1 win.

“We had a very disappointing night offensively, which is something we definitely need to work on,” said Crusader head coach Carin Avery.   “We need to find somebody who can consistently get kills for us, and we need to learn to eliminate a lot of our errors.  Our block didn’t do us any favors tonight either.  I thought our back row played well to keep us in points, but we couldn’t transition any of those good digs to kills.  Our team needs to learn how to close out sets and needs to learn how to win, and when we figure that out., we’ll be pretty good.”

Dooms led the Crusaders with a season-high 15 kills on Tuesday, while Dent added 14 kills, just one off her career high.  The duo also committed 17 attack errors, however, as Valpo totaled 57 kills against 36 attack errors.  Pokorny posted a double-double with 44 assists and 11 digs and Dooms ended the night with a double-double as well, registering 20 digs.  Root tallied a match-high 29 digs, while Pokorny and redshirt freshman Lindsey Hauch (Coloma, Mich./Coloma) each picked up three of Valpo’s eight team aces.

IUPUI (12-13) was led by 14 kills apiece from Kelsey Hoefer and Kalyse Reimbold, getting 13 as well from Moriah Fair.  Shari Bernhardt led the Jaguars with 25 digs, while Corinne Owens was part of nine of IUPUI’s 18 blocks, including four solo efforts.

Valparaiso (16-10) looks to rebound as it returns to Horizon League play this weekend on the road.  The Crusaders start the road swing with a match at Butler on Friday evening at 6 p.m. CDT.  The match can be heard live on WVUR, 95.1 FM, Valparaiso and seen on the Horizon League Network.  Links for the live audio and video, as well as live stats, will all be available at www.valpoathletics.com.