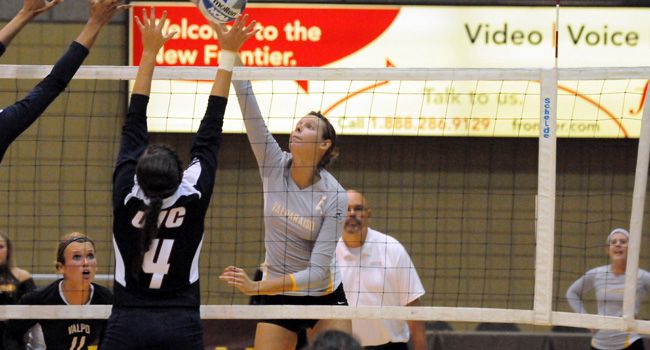 The Crusaders fell victim to big Butler runs in each of the first two sets.  The opener was tight past the midway point, with Valpo within one at 14-13 after a kill by junior Mary Dent (Chicago, Ill./Von Steuben).  But Butler rattled off five straight points to take control.  Then, in the second frame, the Crusaders and Bulldogs were tied at 17 before Butler scored four straight points and eight of the final ten.

Valpo rallied to take the third set and extend the match to a fourth frame.  Trailing 15-10, the Crusaders went on a 7-1 run, including three kills from Britton and capped by a block by freshman Morgan Beil (St. Louis, Mo./Marquette) and redshirt freshman Lindsey Hauch (Coloma, Mich./Coloma), to take a brief 17-16 lead.  Butler responded with three straight points, however, to take a 19-17 advantage.

The teams would trade sideouts for the next seven points, with Valpo pulling within one on another kill by Britton at 22-21.  A Bulldog hitting error tied the set and forced Butler to use its second and final timeout.  Out of the stoppage, junior Taylor Root (Jenison, Mich./Jenison) registered a service ace to give the Crusaders the lead, and another attack error by Butler gave Valpo set point.  Fittingly, it was Britton, who ended the set with six kills, with the final termination to give the Crusaders the third frame.

But Butler quickly took control of the fourth and final set, jumping out to a 6-2 lead en route to a 14-6 advantage.  Valpo scored seven of the next ten points, including four kills by Britton, to close within 17-13, but the Bulldogs answered with three straight points to retain the momentum and eventually go on to the victory.

Maureen Bamiro led Butler (11-13, 7-5 Horizon) with 10 kills on .333 hitting and also registered seven blocks.  Maggie Harbison and Claire Randich each were on in 11 rejections.

Valparaiso (16-11, 7-5 Horizon) closes out the weekend league road swing with a match at Wright State on Saturday afternoon.  First serve is slated for 3 p.m. CDT, with live stats available at www.valpoathletics.com.