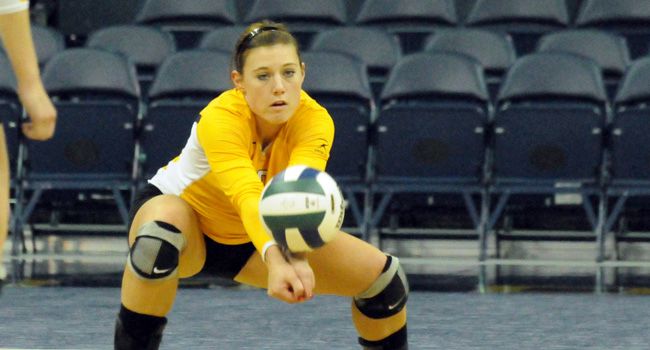 Valparaiso set a new program record for fewest points allowed in a set, crushing Wright State in the opening frame en route to a 3-0 (25-4, 25-20, 25-16) victory in Dayton, Ohio Saturday afternoon.

The Crusaders surrendered just four points in the first set, breaking their previous mark of seven set in the Horizon League Championship semifinal last season at Milwaukee.  The Raiders and Crusaders were actually tied at two early in the opener before a 10-0 Valpo run opened things up.  Ariel Cudney (LaPorte, Ind./LaPorte) had a pair of service aces during the spurt, while Lindsey Hauch (Coloma, Mich./Coloma) had three terminations as well.

Wright State got a point back on a Valpo attack error, but the Crusaders responded with four more points in a row, including two more Hauch kills, for a 16-3 lead.  After a kill by the Raiders, a service error gave the serve back to Valpo, and the Crusaders served up the final eight points of the 25-4 win, four of which were kills by Morgan Beil (St. Louis, Mo./Marquette).

Valpo actually tallied the first four points of the second set as well, including two more aces by Cudney, for a 27-2 run spanning the first two sets.  Up 10-6, an 8-1 run, including two more Beil kills, pushed the lead out into insurmountable territory at 18-7.  Wright State would go on a 7-2 spurt late in the frame to close within 24-20, but a kill by Ellen Vanden Berg (Little Chute, Wis./Little Chute) gave Valpo a two-set lead into the in-game break.

Again a Cudney trip to the service line was key in the third set, as a kill by Hauch gave Valpo a 13-9 lead just past the midway point.  Vanden Berg and Hauch then tallied consecutive terminations to push the advantage to six points, and then Cudney registered her fifth ace of the match to make it a 16-9 contest.  The sweep was academic from there, and a service error by the Raiders eventually ended the showdown in Valpo’s favor.

Beil paced the Crusader offense with 10 kills on .500 hitting Saturday, while Vanden Berg and Hauch each registered seven kills without committing an attack error.  In fact, Valpo hit .317 and committed just six total hitting errors on the night.  Cudney tallied up five service aces, tying for the fifth-most in a three-set match in Valpo history, while Taylor Root (Jenison, Mich./Jenison) led a stout Crusader back-line effort with 17 digs.  Jenny Pokorny (Geneva, Ill./Geneva) posted a double-double as well with 29 assists and 16 digs.

Valparaiso (17-11, 8-5 Horizon) returns to action Friday evening at Youngstown State at 6 p.m. CDT.  Live audio is available through WVUR, 95.1 FM, Valparaiso and live video through the Horizon League Network.  Links to both, as well as live stats, will be posted on www.valpoathletics.com.