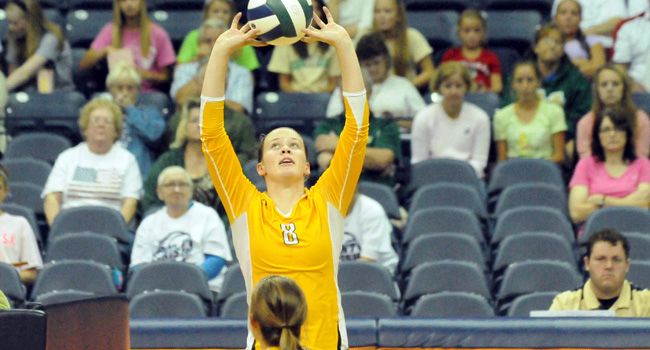 This Week in Crusader Volleyball: The Valparaiso volleyball team continues a stretch of six matches away from the ARC this weekend as it heads to eastern Ohio for a pair of Horizon League contests.  The Crusaders will take on Youngstown State on Friday evening before stopping by Cleveland State for a Saturday afternoon matchup.

Wrapup of Last Week: Valparaiso dropped its first two matches last week before ending on a high note with a sweep of Wright State.  Both of the Crusaders’ losses last week were in Indianapolis, as Valpo fell to IUPUI and Butler.

Following the Crusaders: Both of this weekend’s league matches can be seen live online for free on the Horizon League Network.  Links to the live video, as well as live stats for both matches, will be available at www.valpoathletics.com.

Head Coach Carin Avery: In her tenth season at the helm of the Crusader volleyball program, Carin Avery has experienced nothing but success at head coach.  Avery is 238-92 (.721) in her nine-plus years at Valpo and owns a 293-116 (.716) record overall in 11-plus years as a head coach.  She ranks among the top-20 winningest active coaches in Division I volleyball by winning percentage and is Valpo’s all-time leader in both wins and winning percentage.

Nine Straight 20-Win Seasons: With at least five regular season matches remaining, plus any contests as part of the Horizon League Championship and any possible postseason match, the Crusaders have a great shot at continuing the program’s tremendous streak of success.  Valpo won 27 matches in 2010, extending to nine straight seasons its streak of posting at least 20 wins.  Valparaiso has won 20 or more matches every year since 2002, Avery’s first at the helm of the Crusader program.  Valpo is one of just 12 programs nationwide to have won at least 20 matches in each of the last nine years.

A Rare Losing Streak: With their pair of losses in Indianapolis to open last week’s action, Valparaiso found itself in the rare position of having lost three straight matches going back to the home defeat against Green Bay.  The last time the Crusaders dropped three straight contests was back in 2008, when they lost four straight matches from Sept. 13-27, including three Horizon League showdowns.

Snapping It in a Big Way: But the Crusaders then came out like a house afire against Wright State on Saturday to snap the losing streak.  Valpo didn’t even have to make one full rotation against the Raiders in the opening set, downing WSU by a 25-4 count in the first frame.  In fact, after being tied at 2-all, the Crusaders ended the set on a 23-2 run and actually started the second set with four straight points as well.  The four points allowed is the fewest allowed by a Valpo team since the move to rally scoring.

Sweeps Still Going Their Way: While the Crusaders suffered through three straight losses, none of the defeats came in three sets, as Valpo has continued its run of success in sweeps.  Since Sept. 14, when the Crusaders swept UIC at the ARC to open Horizon League play, 10 of Valpo’s 17 matches have ended in just three sets, with the Crusaders going 9-1 in such contests.  In fact, seven of Valpo’s eight Horizon League wins have come in sweeps, with only a four-set win over Butler on Oct. 1 serving as the outlier.

Spreading the Kills: The Crusaders have featured a balanced offense all season long, with a number of players sharing the attacking load.  Sarah Dooms is pacing Valpo this season with 226 total kills, the fewest kills by any of the nine team leaders in the Horizon League.  Despite this, Valpo still boasts the highest cumulative kill total (1,309) among the nine league schools.  Morgan Beil has tallied 221 total kills, while two other Crusaders have at least 175 kills apiece.  13 matches into the Horizon League slate, only Beil (117) has picked up more than 100 kills in league action.

Players of the Week: Junior Taylor Root tied a Horizon League record last week with her seventh career weekly Defensive Player of the Week honor.  Root, who set a new career high with 38 digs against Green Bay, now has earned a pair of weekly awards this year, also earning the honor in the season’s first week.  Root’s seven career league weekly accolades tie her with Beth Greulich (CSU) and Kerri Schuh (UWM) for the most in league history.  Freshman Morgan Beil has also been honored by the Horizon League this season, picking up Offensive Player of the Week honors on Sept. 19.

Serving Up Aces: The Crusaders totaled 18 aces over 11 sets in their three matches last week, with a number of different players stepping up and having big matches from the service line.  At IUPUI, it was Lindsey Hauch and Jenny Pokorny with three aces apiece, while Taylor Root picked up two aces at Butler.  Ariel Cudney then tied her career high with five aces at Wright State, a match that also saw Hauch register two more aces.  On the year now, the Crusaders actually boast more aces (125) than service errors (124).

Efficient Offensive Performances: The three-set sweep of Wright State, in which the Crusaders committed just six attack errors and hit at a .317 clip, featured a number of high-efficiency attackers.  Morgan Beil led Valpo with 10 kills and committed just one attack error, swinging at a .500 clip, the seventh match of her young career that she has hit at least .500.  Meanwhile, Lindsey Hauch and Ellen Vanden Berg each picked up seven kills without committing an attack error, hitting .583 and .412, respectively.

Root Sets New Career High: Junior Taylor Root enters this weekend poised to move up another spot into second place on Valpo’s career digs chart.  The Crusader libero averaged an even six digs per set last week, tallying 29 against IUPUI, 20 at Butler and 17 in the sweep of Wright State.  The two-time Horizon League Defensive Player of the Week entered the week tied for 27th nationally and second in the Horizon League with her average of 5.25 digs/set.  With her 66 total digs last week, Root now has 1,865 career digs and is now just 22 digs shy of Sara Silcox for the second spot on the Crusaders’ all-time digs chart.  Her 525 total digs this year also already rank ninth on Valpo’s single-season chart.

Britton Returns: After sitting out a couple matches due to injury, senior Katie Britton returned to the lineup last weekend and provided the Crusaders a solid offensive force.  Britton committed just four attack errors on 35 swings against a strong Butler defensive presence at the net and ended the night with a match-high 14 kills on .286 hitting.  The next day, Britton had to play just two sets, putting down four kills on nine attacks in the sweep of WSU.  Britton enters this week boasting team-best averages of 2.80 kills/set overall and an even 3.00 kills/set in league action.