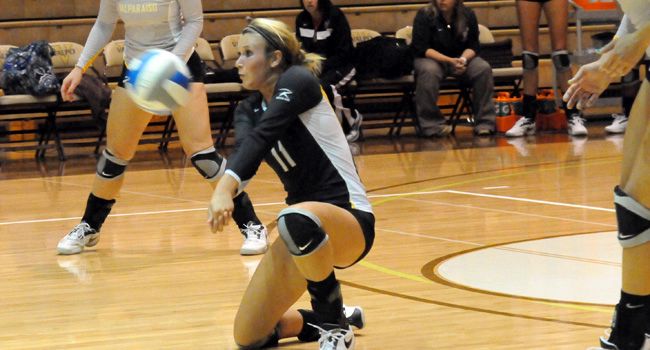 The Crusaders needed a big rally late to take the opening set, as Cleveland State took control around the mid-way point and pushed out to a 21-17 advantage.  But a combination of Viking attack errors and a trio of kills by junior Mary Dent (Chicago, Ill./Von Steuben) combined for the next six points as the Crusaders took a 23-21 lead.  A setter dump by CSU’s Jordan Goad briefly stopped the Valpo run, but a kill from freshman Morgan Beil (St. Louis, Mo./Marquette) gave the Crusaders set point and Beil then teamed up with senior Jenny Pokorny (Geneva, Ill./Geneva) on the set-winning block.

The two squads traded massive runs in the second set.  With the score tied at 8-all, Cleveland State scored nine of the next 10 points to claim a 17-9 lead.  But the Crusaders responded immediately, going on a 10-3 run of their own, featuring two kills and a block by redshirt freshman Lindsey Hauch (Coloma, Mich./Coloma) and a solo block and a service ace from Pokorny, to close within 20-19.  That was as close as Valpo got, however, as CSU closed the set on a 5-1 spurt to send the match into the in-game break tied at one set apiece.

A strong offensive attack from Cleveland State in the final two sets would be the Crusaders’ undoing, as the Vikings combined to hit .368 with 32 kills over the last two sets compared to .101 hitting and 20 kills by Valpo.  Three straight points with the third set tied at five-all gave Cleveland State the lead for good in the third, while the Crusaders were able to tie the score only once early in the fourth and final set.

“For the first time all year, our serve receive was not good, and we were not able to get into a rhythm offensively,” said Crusader head coach Carin Avery.  “We again made too many errors as well.  We did do some good things defensively, but we couldn’t execute from our good defensive plays.”

Valparaiso (18-12, 9-6 Horizon) briefly steps out of league play next Tuesday as the Crusaders travel to Chicago State for a 7 p.m. match.