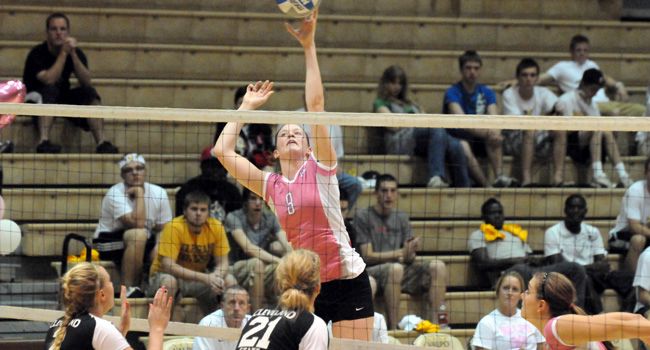 Valparaiso took the third set from league-leading Milwaukee and had three chances to send the match to a decisive fifth set, but the Panthers rallied to down the Crusaders 3-1 (25-19, 26-24, 20-25, 26-24) Friday evening at the Athletics-Recreation Center on Senior Night.  Valpo will now enter next weekend’s Horizon League Championship as the fourth seed.

Prior to the match, the three Crusader seniors were honored, as Katie Britton (Mishawaka, Ind./Marian), Amy Groesbeck (Winfield, Ill./Wheaton North) and Jenny Pokorny (Geneva, Ill./Geneva) were all playing for the last time in front of their home fans at the ARC.  The trio has helped the Crusaders to 93 victories over their four years in Valpo uniforms.

Back-to-back service aces by junior Taylor Root (Jenison, Mich./Jenison) started the match on the right foot for the Crusaders, and three early kills by Pokorny helped Valpo to an 8-5 edge in the opener.  But Milwaukee went on a 9-2 run to claim a 14-10 advantage, and while Valpo got back to within two points on five separate occasions later in the set, the Crusaders could never get over the hump as the Panthers took the first set.

A five-point spurt midway through the second set took a 15-13 deficit and turned it into an 18-15 Valpo lead as the Crusaders looked to even the match.  But Milwaukee countered with five straight points of its own to regain the lead, and eventually earned three set point chances at 24-21.  Valpo fought off all three, however, as a kill by Sarah Dooms (Greenwood, Ind./Center Grove) and two Panther errors knotted the set at 24-all.  But a kill by Elizabeth Egerer gave Milwaukee a fourth set point opportunity, and a Panther triple block sent the visitors into the in-game break up two sets.

The Valpo offense, which had hit at less than a .100 clip in the first two sets, came alive in the third frame, as the Crusaders put down 15 kills against just five attack errors, hitting .278 for the set.  The decisive points wouldn’t come until the very end, however, as every Crusader run earlier in the frame was answered by the Panthers.

Milwaukee reeled off three straight points to get to within 21-20, but Valpo answered emphatically to send the match to a fourth set.  Mary Dent (Chicago, Ill./Von Steuben) started the end run with a kill, and then Ellen Vanden Berg (Little Chute, Wis./Little Chute) and Lindsey Hauch (Coloma, Mich./Coloma) combined on a block to put the Crusaders up three.  An ace by Janelle Hobbs (Hartland, Wis./Arrowhead) gave Valpo set point, and another kill by Dent secured the third-set win for the Crusaders.

A run of five straight points midway through the fourth frame, featuring two blocks and a kill by Hobbs, put Valpo up 14-8 as the Crusaders looked to send the match to a decisive fifth set.  Down 16-10, Milwaukee fought back with five straight points, but Valpo responded with a 7-1 run, including two kills each from Pokorny and Vanden Berg, to go ahead 23-16.  The Panthers rattled off five consecutive points to move to within 23-21, but a kill by Britton set Valpo up with three chances to keep the match alive.  But Milwaukee continued its late rally, picking up five more points to complete its comeback and earn the win.

Britton led the Crusaders with 14 kills in her final match at the ARC, while Vanden Berg put down 11 kills on .320 hitting.  Pokorny approached a triple-double, ending the night with 39 assists, 16 digs and eight kills on .304 hitting.  Five Valpo players reached double figures in digs, led by 25 from Root, while Hauch was part of a team-best five blocks.

Egerer and Julie Kolinske paced Milwaukee (22-4, 15-0 Horizon) with 16 kills apiece, the only Panthers to reach double figures in the category.  Morgan Potter led all players with 37 digs.

As the fourth seed, Valparaiso (19-13, 9-7 Horizon) will face the fifth seed in the Horizon League Championship quarterfinal on Friday.  The Crusaders will learn whether they play UIC or Green Bay following Saturday’s action.