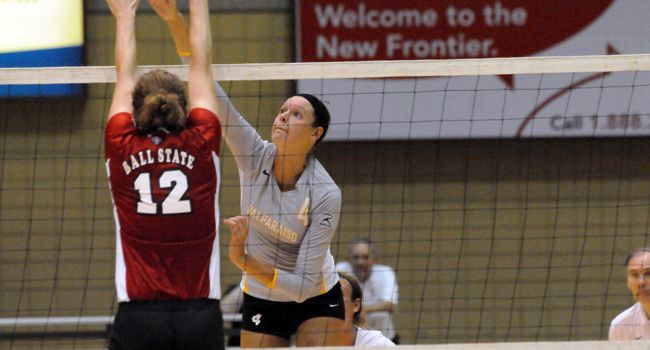 Britton tied for team-high honors in the final match of her career, posting seven kills to go along with two digs, a block and a service ace.  She finished her career with 893 terminations and 114 blocks.  Groesbeck tallied a pair of kills, two digs and a block in her final match, closing her tenure with the Crusaders with 434 kills and 114 blocks.

Pokorny picked up her 21st double-double of the year, finishing the night with 23 assists and 14 digs, in addition to five kills on .385 hitting.  The senior setter closed out her career with 2,934 assists, fifth-most in Valpo history, and also broke the 1,000-dig milestone on Saturday, ending with 1,009 digs.  She also posted 433 career kills, 167 blocks and 71 service aces.  The trio of seniors helped Valpo to 94 wins over their four-year careers, extending the Crusaders’ streak of consecutive 20-win campaigns to 10 straight seasons.

Jessica Brown led Western Michigan (24-8) with 10 kills, as five different Broncos picked up at least eight kills on the evening.  Lena Oliver led all players with 18 digs, while Ali Gossen and Ashley Turnage each were in on five of WMU’s nine blocks.

Valparaiso (20-15) closed the season with 20 wins thanks to its win in the Horizon League Championship quarterfinal over UIC, making Valpo just one of 12 programs nationwide to win 20-plus matches in each of the last 10 years.  This year’s Crusader squad broke into Valpo’s single-season top-10 charts in both digs (2,278; 7th) and blocks (271.5; 8th), while they also posted 147 service aces against just 146 service errors, the first time in program history the Crusaders have tallied more aces than errors on the serve.

Individually, Root, who ranks among the nation’s leaders in digs/set, moved up into third place on Valpo’s single-season digs chart with 677 digs in 2011, giving her two of the top-three single-season efforts in program history.  She will enter her senior year just 292 digs shy of the Crusader career record in the category.