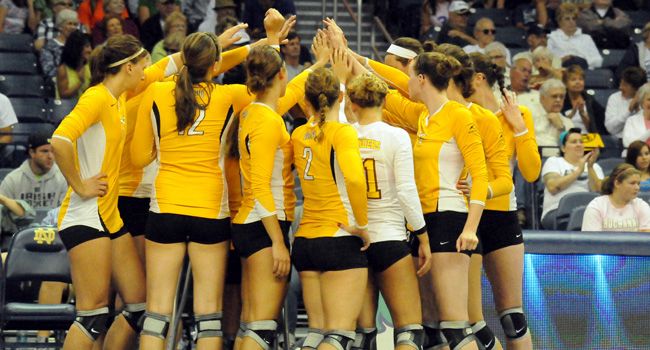 Valparaiso volleyball head coach Carin Avery announced today the Crusaders’ schedule for the upcoming 2012 campaign, a slate which includes a pair of early-season tournaments at Big Ten programs, as well as 10 home matches throughout the season at the Athletics-Recreation Center.  Valpo enters 2012 as one of just 12 teams nationwide which has won at least 20 matches in each of the last 10 seasons.

The Crusaders’ 2012 season kicks off at Iowa’s Hawkeye Challenge Aug. 24-25, which sees Valpo take on Southeast Missouri State, Chicago State and South Dakota State in addition to the host Hawkeyes.  The next weekend, Valpo travels to Saint Louis for the Billiken Invitational, where it will also match up against South Alabama and Southern Illinois.

Valpo opens up at the ARC with a mid-week non-league contest on Tuesday, Sept. 4, hosting Illinois State.  The Crusaders then head to Morehead State for the MSU Eagle Challenge Sept. 7-8, facing Missouri, Savannah State and South Carolina State as well.  The pre-league schedule concludes the next weekend at Indiana’s Hoosier Classic with a field which also includes Miami (Ohio) and UT-Chattanooga.  Other non-league action sees the Crusaders host South Dakota State (Sept. 26) and IUPUI (Oct. 23) and travel to Chicago State (Nov. 2).

The 16-match, double round robin Horizon League schedule commences Sept. 21 at UIC, as the Crusaders’ first three league matches are all on the road.  Valpo opens the home league campaign on Oct. 5 against Cleveland State, while the regular season concludes Nov. 11 at home versus Milwaukee.  The Horizon League Championship begins Nov. 16 and runs through Nov. 18 at the regular season champion, with the tournament champion earning an automatic berth to the 2012 NCAA Tournament.

“We have a challenging early season schedule ahead of us this year,” said Avery.  “Not only with two Big Ten teams, but also another NCAA Tournament team in Morehead State and Saint Louis, which had a strong RPI last year as well.  These tournaments will test us early on as we prepare for the always-challenging Horizon League schedule.  We were also fortunate to be able to add Illinois State and South Dakota State to our home schedule this year to give our fans a chance to see two more good teams at the ARC.”