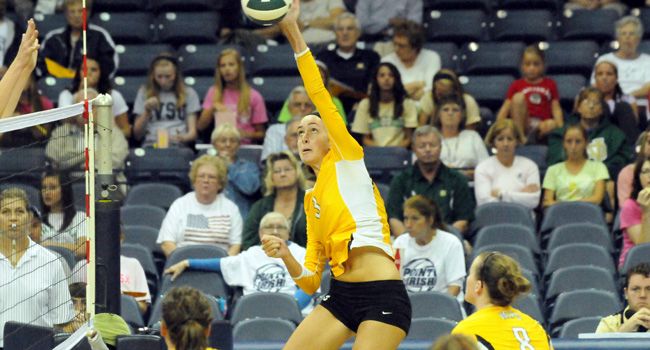 This Week in Crusader Volleyball: The Valparaiso volleyball program kicks off the 2012 campaign this weekend at the Hawkeye Challenge in Iowa City, Iowa, playing four matches over a two-day span. The Crusaders enter 2012 having won at least 20 matches in each of the last 10 years.

Following the Crusaders: Live stats for all four matches of the Hawkeye Challenge will be available through www.valpoathletics.com. All ten of the Crusaders’ home matches this year will be streamed with live video live on the Horizon League Network, along with audio broadcasts on WVUR (95.1 FM, Valparaiso), while six road volleyball matches are also slated for HLN streaming.

Head Coach Carin Avery: Over her 10 years as head coach, Carin Avery has won 241 matches and has led Valpo to three league regular season and tournament titles, as well as three NCAA Tournament appearances. A two-time league Coach of the Year, Avery has coached 42 All-League recipients over her tenure as Crusader head coach. She is Valpo’s all-time leader in both victories and winning percentage, and is just four wins shy of 300 career victories overall.

Series Notes: Valpo has faced all four of its opponents this weekend previously in program history, but only has a lengthy history with Chicago State. The Crusaders are 37-1 all-time against the Cougars, including a 3-1 win in Chicago last season. Valpo is 4-2 against season-opening opponent Southeast Missouri State, most recently sweeping SEMO in 2004. The Crusaders have dropped their only matchup in program history against both South Dakota State (2006) and Iowa (1993).

Valpo in Season Openers: The Crusaders have dropped their season-opening match in each of the last three seasons, including last season against a top-25 Ohio State squad. But the last two years, the opening loss hasn’t deterred Valpo from early success. The 2011 Crusader squad proceeded to win seven of its next eight matches, while the 2010 Crusaders rattled off 11 straight victories.

Preseason Honor: Senior libero Taylor Root, the two-time reigning Horizon League Defensive Player of the Year and a two-time AVCA Honorable Mention All-American, was named the Horizon League Preseason Defensive Player of the Year as the league’s head coaches voted on preseason awards for the first time. Root enters the 2012 campaign as the Horizon League’s all-time digs leader, having tallied 2,017 career digs through her first three seasons. Through three years, Root has already broken the league record for Player of the Week awards with eight weekly honors from the league office and has earned All-League honors in each of her three seasons.

Plenty of Experience Returns: The Crusaders enter the 2012 campaign with a good bit of experience returning at most positions around the court. Along with Root in the back, defensive specialists Ariel Cudney and Sarah Chrabaszcz return. Up front, seven of Valpo’s nine attackers are back, led by 2011 All-League honoree Morgan Beil. Redshirt sophomore Kelsey Victor, who sat out last season due to injury, is also back in action for 2012.

What Needs Replaced: The biggest question mark for the Crusaders entering this year comes at the setter position, as three-year starter Jenny Pokorny graduated following the 2011 campaign, closing her career fifth in Valpo history in assists. Valpo also graduated outside hitter Katie Britton and right side hitter Amy Groesbeck as well.

What’s New: A pair of freshmen join the 10 letterwinners for the 2012 season. Freshman setter Kelsey Berrington will look to earn the starting setter role from day one, coming to Valpo after earning First Team All-State honors at Tecumseh [Mich.] H.S. as a senior. The Crusaders also added freshman Chelsey Tekavec, who has experience playing as a right side as well as a defensive specialist and who was an All-District honoree at Solon [Ohio] H.S. her senior year.

Record Book Watch: A couple of Crusaders are looking to move onto and up Valpo’s career charts entering the 2012 season. Most notably, Root enters her final season with 2,017 career digs, less than 300 shy of Brittany Malicoat’s Crusader career record in the category. Meanwhile, junior defensive specialist Ariel Cudney, who tallied 33 service aces in 2011, would move into a tie for 10th on Valpo’s all-time aces chart if she duplicated that number in 2012, as she enters this season with 87 career aces.