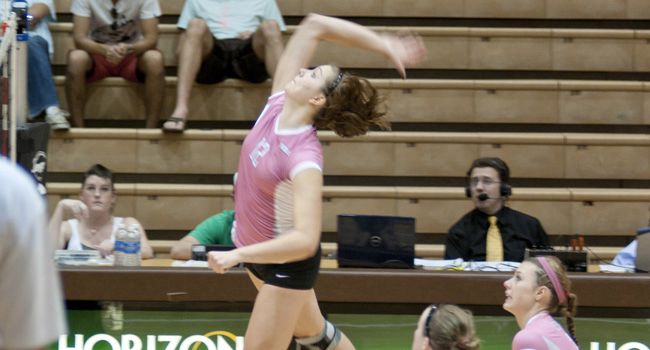 “We were much improved today,” said Crusader head coach Carin Avery.  “It was a good weekend of play for us.  We know exactly what we need to work on for us to get better as we head into next weekend.”

The Crusaders maintained a small lead throughout the second half of the first set of their opener, until the Jackrabbits rallied to tie the set at 21, 22, and 23-all.  But a pair of SDSU hitting errors gave Valpo the opening set.  South Dakota State would claim early leads in each of the next two sets to take a 2-1 advantage into the fourth frame.

The Jackrabbits would also lead throughout the first half of the fourth set, but Valpo rallied shortly past the halfway mark.  Trailing 15-13, junior Sarah Dooms (Greenwood, Ind./Center Grove) put down a kill to start a six-point Crusader run, which also featured kills by redshirt sophomore Lindsey Hauch (Coloma, Mich./Coloma) and sophomore Morgan Beil (St. Louis, Mo./Marquette) and which ended with back-to-back service aces by freshman Kelsey Berrington (Britton, Mich./Tecumseh).  The lead was cut to two points at 19-17, but redshirt sophomore Kelsey Victor (Logansport, Ind./Logansport) picked up a pair of kills in a four-point spurt, and an SDSU hitting error eventually sent the match to a decisive fifth set.

The fifth set was back and forth through the first half, as each team claimed multiple leads.  But with the score 8-8, senior Mary Dent (Chicago, Ill./Von Steuben) recorded a termination to start the match-ending 7-0 run.  Berrington picked up her fourth ace of the match during the spurt, while Victor tallied two kills and Beil picked up one as well as the Crusaders closed out the come-from-behind victory.

Beil led the Valpo offense against the Jackrabbits with 12 kills, while Vanden Berg and Victor each picked up 11 kills apiece.  Berrington registered a double-double with 27 assists and 15 digs to go along with her four service aces.  Root paced the Crusaders with 22 digs, while Dooms tallied 20 digs as well in the winning effort.  The Crusaders hit just .049 over the first three sets, but swung at a .317 clip over the decisive final two frames.

In the tournament finale against the host Hawkeyes, it was Valpo which took the opening set with a late push, scoring nine of the final 14 points after being tied at 16 apiece.  The Crusaders held an early lead in set two and rallied to tie that frame at 17, 18 and 19-all, but Iowa scored six of the final eight points to tie the match at one set apiece into the in-game break.  A 6-1 run late in set three gave Iowa a lead it wouldn’t relinquish, and the Hawkeyes scored 14 of the match’s final 19 points in set four to close the contest.

Victor led the Crusaders in the finale with 11 kills, while Beil added 10 terminations of her own.  Berrington narrowly missed another double-double, posting 20 assists and nine digs, while Root registered 24 digs and Dooms 16.  Vanden Berg ended the evening’s contest with a team-best four blocks.

Vanden Berg earned All-Tournament Team honors after posting 30 kills on .313 hitting over the Crusaders’ four matches in the tournament.  Root picked up her All-Tournament accolade after tallying 5.19 digs/set on the back line.

Valparaiso (2-2) returns to action next weekend at the Billiken Invitational in St. Louis, Mo.  The three-match tournament begins against the host Billikens Friday night at 7 p.m., with live stats available through www.valpoathletics.com.

Noteworthy: Vanden Berg’s All-Tournament honor was the first of her career … Root earned All-Tournament Team mention for the tenth time in her four seasons … Beil paced the Crusaders in the tournament with 40 kills over the four matches … Victor tied her career high in kills with 11 for the third and fourth time.