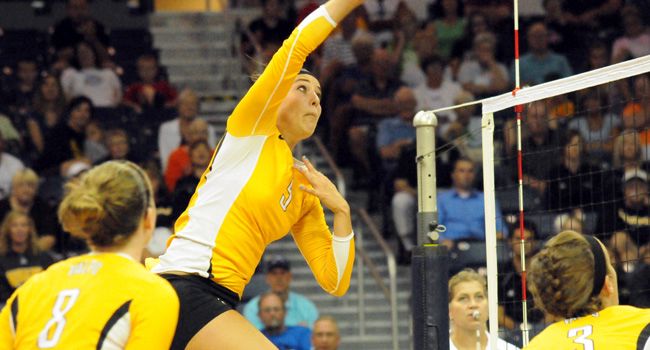 This Week in Crusader Volleyball: The Valparaiso volleyball team hits the road for the second of its four early-season tournaments this weekend, traveling to St. Louis, Mo. for the Active Ankle Challenge, hosted by Saint Louis University. The Crusaders are also scheduled to face South Alabama and Southern Illinois as part of the tournament.

Previously: Valpo split four matches on the opening weekend of play at the Hawkeye Challenge in Iowa City. The Crusaders earned wins over Chicago State (3-0) and South Dakota State (3-2 after trailing 2-1), but fell to SEMO and Iowa by identical 3-1 scores after winning the first set of both matches. Taylor Root and Ellen Vanden Berg earned All-Tournament Team honors.

Next Up: Valpo will play a rare early-season home match next Tuesday, Sept. 4 as the Crusaders host Illinois State at the ARC. Valpo then travels to Morehead State for the MSU Eagle Challenge the following weekend.

Following the Crusaders: Live stats for all three matches of the Active Ankle Challenge will be available through www.valpoathletics.com, while live video (for a fee) of the Saint Louis match will be available through the Billikens’ website. All ten of the Crusaders’ home matches this year will be streamed with live video live on the Horizon League Network, along with audio broadcasts on WVUR (95.1 FM, Valparaiso), while six road volleyball matches are also slated for HLN streaming.

Head Coach Carin Avery: Over her 10 years as head coach, Carin Avery has won 241 matches and has led Valpo to three league regular season and tournament titles, as well as three NCAA Tournament appearances. A two-time league Coach of the Year, Avery has coached 42 All-League recipients over her tenure as Crusader head coach. She is Valpo’s all-time leader in both victories and winning percentage, and is just two wins shy of 300 career victories overall.

Series Notes: Valpo has faced all three of its opponents this weekend previously in program history, but only has a long history with Saint Louis. The Crusaders and Billikens have met 11 times, with SLU holding a 7-4 series edge, but Valpo swept the last meeting on Sept. 9, 2005 at the ARC as part of the Popcorn Classic. The Crusaders lost their only previous matchup with South Alabama in 1988, 3-2, and have lost both matches against Southern Illinois, most recently in 2009.

Spreading Out Playing Time: Still trying to work out lineup combinations, Avery played at least 10 of Valpo’s 12 players in all four matches last weekend on the opening weekend of play. All 12 Crusaders saw action against Chicago State.

Making Their Debut: Freshmen Kelsey Berrington and Chelsey Tekavec both donned the Valpo uniform and took the court for the first time last weekend. Berrington saw action in all four matches, while Tekavec appeared in three contests.

Setting Them Up: With the graduation of three-year starting setter Jenny Pokorny, Berrington and junior Ariel Cudney split time at setter last weekend, with both players posting double figures in assists in all four matches. Cudney tallied a weekend-best 23 against SEMO after entering the season with a single-match high of four for her career, while Berrington posted 27 assists in the win over South Dakota State.

Strong Defending: Valpo ranked first in the Horizon League through the first weekend of action, holding opponents to just .125 hitting in its first four matches. The Crusaders averaged 17.50 digs/set as a squad on the weekend, led by 5.19 from Root (2nd in the HL) and 3.94 from junior Sarah Dooms (7th in the HL).