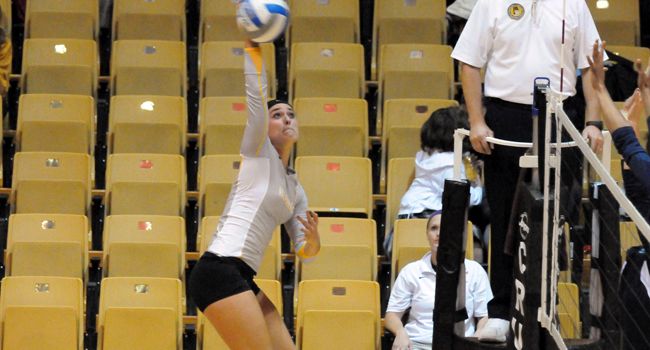 "We know that volleyball is a game of mistakes," said Crusader head coach Carin Avery. "Right now, the silly mistakes that we are making at crucial times is holding us back from being a great team. We hope we learn from our mistakes tonight and move forward, because once we figure that out, we will be a tough team to handle."

An early 7-0 run featuring three blocks gave the Crusaders control of the opening frame, and while Saint Louis eventually rallied to tie the set at points 17-20, Valpo used a pair of Billiken errors and a block by sophomore Morgan Beil (St. Louis, Mo./Marquette) and junior Janelle Hobbs (Hartland, Wis./Arrowhead) to lead 23-20. Even after back-to-back SLU points, a kill by Beil gave Valpo a pair of set points to work with.

But Saint Louis picked up a block and a kill to force extra points. The Crusaders' Mary Dent (Chicago, Ill./Von Steuben) presented Valpo with a chance at a third set point with a kill to make it 25-24, but a kill, a Crusader error and a service ace ended the opening set in the Billikens' favor.

The middle two sets were much more straightforward, with Saint Louis going on to win the second set after taking a 7-6 lead. SLU led that frame by as much as 22-12, but a belated 7-1 run, featuring three kills and a block by junior Ellen Vanden Berg (Little Chute, Wis./Little Chute), brought the Crusaders within 23-19 before back-to-back points sent SLU into the in-game break up two sets.

The third set was back-and-forth early on, with neither side having seized control at the halfway mark. Tied at 14, the Crusaders rattled off three straight points, only to see the Billikens score three in a row to tie things up again at 17. But Valpo used its offensive attack to keep the match alive, posting six kills in its final eight points, including two apiece from redshirt sophomores Kelsey Victor (Logansport, Ind./Logansport) and Lindsey Hauch (Coloma, Mich./Coloma), to go on an 8-3 spurt to claim the third frame.

Saint Louis led throughout the first half of the fourth set and owned a 16-13 lead before a 5-1 Crusader run gave Valpo an 18-17 edge. The lead remained one point at 20-19 before SLU scored three in a row to go ahead 22-20, but a service error gave the serve back to the Crusaders, and kills from junior Sarah Dooms (Greenwood, Ind./Center Grove) and Beil put Valpo two points away from forcing a decisive fifth set. But a Crusader error on serve tied the frame at 23-all, and SLU closed the match with a kill and a service ace.

Valparaiso (2-3) closes out play at Saint Louis with two more matches on Saturday, facing South Alabama at 10 a.m. and Southern Illinois at 4:30 p.m. Live stats for both matches will be available at www.valpoathletics.com.