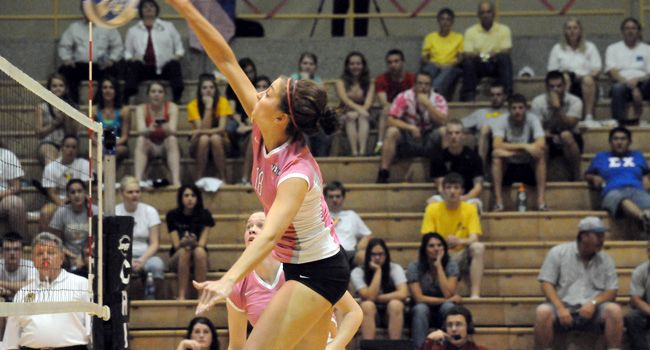 Valparaiso split a pair of matches on its final day of action in the Active Ankle Challenge in St. Louis, Mo., defeating South Alabama 3-1 (24-26, 25-20, 26-24, 25-16) Saturday morning before falling to Southern Illinois 3-0 (25-14, 25-13, 25-15) to close tournament play. Junior Janelle Hobbs (Hartland, Wis./Arrowhead) represented the Crusaders on the All-Tournament Team, the first All-Tournament honor of her career.

The Crusaders led from the start of the first set in their match against South Alabama, and after the Jaguars tied the frame at 11, Valpo posted four kills and took advantage of four USA errors to go on an 8-3 spurt to take a 19-14 advantage. The Jaguars responded with a 7-2 run of their own, however, to tie the frame at 21, and while a Hobbs kill briefly quelled the momentum, USA scored three straight points to earn set point at 24-22. Valpo picked up back-to-back terminations by senior Mary Dent (Chicago, Ill./Von Steuben) and junior Sarah Dooms (Greenwood, Ind./Center Grove) to send the set into extra points, but a Jaguar kill and a Crusader error ended the first set in South Alabama's favor.

South Alabama had early control of set two, running out to an 8-4 lead and still leading by four points at 12-8. But Valpo rolled off a 9-1 run, highlighted by three kills from Dent and a pair of service aces by freshman Kelsey Berrington (Britton, Mich./Tecumseh), to take a 17-13 lead. The Jaguars closed back to within one at 19-18, but a pair of kills by junior Ellen Vanden Berg (Little Chute, Wis./Little Chute) helped the Crusaders score three straight points to gain breathing room, and a block from redshirt sophomore Kelsey Victor (Logansport, Ind./Logansport) and sophomore Morgan Beil (St. Louis, Mo./Marquette) eventually gave Valpo the second set.

The third frame played out in back-and-forth fashion, with nine ties and six lead changes. The Jaguars rolled out to an early five-point lead, but Valpo rallied with a 7-2 mid-set run to earn a two-point lead at 17-15. After the teams traded points, USA rattled off six of the next seven points to earn a 22-19 edge, but Hobbs picked up a kill and combined with Vanden Berg on a block in a three-point spurt to tie the frame at 22-all. The sides traded sideouts on the next four points, but a Victor kill gave the Crusaders their first set point at 25-24, and Victor again combined with Beil on a block as Valpo took the third set.

The fourth set looked like it would be much the same as the first three early on, as South Alabama claimed an early 9-6 advantage. But Valpo proceeded to score 10 straight points, including two kills apiece by Dent and Beil and a pair of blocks from Victor, to go ahead by a commanding 16-9 lead. The edge never fell under four points the rest of the way as the Crusaders completed the four-set victory.

Dent led the Crusaders in the win over the Jaguars, picking up 12 kills on .258 hitting, while Dooms reached double figures as well with 10 kills. Beil, Hobbs and Vanden Berg all tallied nine kills apiece while hitting better than .300, with the latter two eclipsing the .400 barrier. Berrington dished out 21 assists to go along with 19 from junior Ariel Cudney (LaPorte, Ind./LaPorte), while redshirt sophomore Lindsey Hauch (Coloma, Mich./Coloma) picked up four service aces. Defensively, Dooms paced Valpo with 19 kills, while Beil and Victor registered five blocks each.

The Crusaders were unable to slow down Southern Illinois' offense in their tournament finale, as the Salukis hit .402 as a team while holding Valpo to .128 hitting. The best chance for the Crusaders to take a set came in the third frame, as Valpo scored four out of five points to close within 15-14, but SIU went on a 10-1 run to end the match. Beil and Vanden Berg each had seven kills to lead the offense in the losing effort, while defensively, Victor had four blocks and senior Taylor Root (Jenison, Mich./Jenison) tied for match-high honors with 13 digs.

Valparaiso (3-4) plays a rare mid-week match at the ARC early in the season this coming Tuesday, as the Crusaders host Illinois State on Sept. 4 at 7 p.m. The match can be seen online through the Horizon League Network and heard locally on WVUR (95.1 FM, Valparaiso). Links for the live video and audio, as well as live stats, will be available at www.valpoathletics.com.