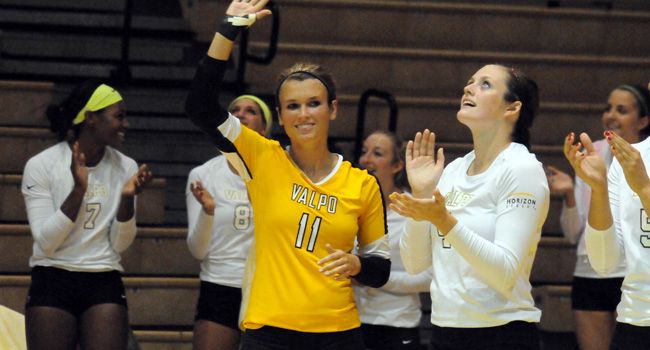 Taylor Root has been honored by the league office nine times. (Ray Acevedo)

Coming off a week in which she broke the Valparaiso career digs record and moved into the top-25 in NCAA history in the category, Crusader senior libero Taylor Root (Jenison, Mich./Jenison) added to her league record for weekly awards as she was named the Horizon League Defensive Player of the Week for the ninth time in her career.

Root entered Wednesday’s home match against South Dakota State needing just six digs to surpass Valpo’s career record of 2,309 and did that early on, recording the record-breaking dig at 14-12 of the first set.  The senior led all players against the Jackrabbits with 27 digs in the Crusaders’ four-set loss.

Root then helped the Crusaders rally from a two-set deficit to down Wright State in league play on Friday evening in five sets, again pacing all players with 31 digs.  The senior, who averaged 6.44 digs/set over the two matches last week, ended the weekend with 2,362 career digs, placing her 23rd in NCAA history in the category and less than 100 digs shy of the top-10.  Root and the rest of the Crusaders return to the court at the ARC on Friday evening at 7 p.m., hosting Cleveland State.