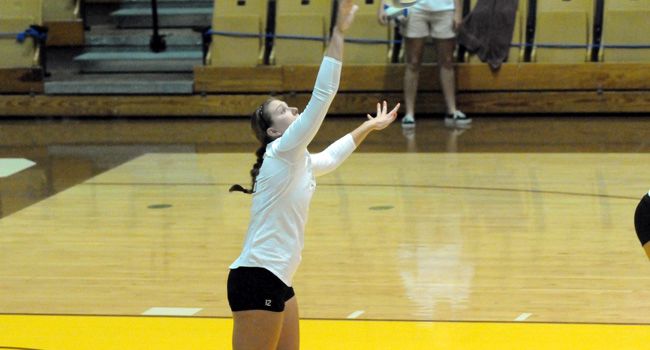 The Valparaiso volleyball team earned its first win at Milwaukee in regular season play since joining the Horizon League on Saturday, downing the Panthers 3-2 (25-15, 25-23, 24-26, 21-25, 18-16). The Crusaders conclude the first half of league play at 5-2 and in a tie for second place in the league standings.

"It was a classic Milwaukee and Valpo matchup today," said Crusader head coach Carin Avery. "Both teams played extremely hard, and it came down to the last possible play to win the match. We had our ups and downs all night, but the important thing is that we found a way to claw back and win. We had a goal to win our first-ever regular season match at their place, and I'm so happy for Mary and Taylor that they achieved that mini-goal."

The decisive fifth set saw a number of twists and turns on Saturday. It was Milwaukee which jumped out to a quick three-point lead at 4-1, but after the teams traded sideouts, Valpo scored four straight to go ahead 6-5. Junior Sarah Dooms (Greenwood, Ind./Center Grove) had two kills in the spurt, while junior Ellen Vanden Berg (Little Chute, Wis./Little Chute) also had a kill and teamed with Dooms on a block as Valpo claimed the lead.

The Crusaders pushed their lead to two points on three occasions, the latest coming at 12-10 following a kill by redshirt sophomore Kelsey Victor (Logansport, Ind./Logansport). Milwaukee scored three straight to re-claim the lead, however, and following another kill from Dooms, a Panther kill gave them match point at 14-13. A termination from Vanden Berg kept the Crusaders alive, and a UWM error provided the Crusaders their first match point opportunity.

Milwaukee responded with a kill from Maisey Mulvey to knot the set at 15-all, but Vanden Berg put Valpo on the verge yet again with her career-high 23rd kill of the evening. A kill from Elizabeth Egerer tied the frame at 16-16, but again the Crusaders responded, this time with a kill by senior Mary Dent (Chicago, Ill./Von Steuben). Granted a third match point chance, Valpo finally closed out the win courtesy of a Panther attack error. The Crusaders, who had committed 34 attack errors over the match's first four sets, hit .387 in the final frame, posting 13 kills against just one attack error.

Valpo rolled to the win in the opening set, taking a 9-9 score and turning it into a 19-11 lead with a 10-2 run, thanks in large part to three kills from sophomore Morgan Beil (St. Louis, Mo./Marquette) and two from Vanden Berg. The Crusaders never led by less than seven the rest of the way in the opener. Meanwhile, the second set looked like it would end with the match evened up, as Milwaukee led 20-13. But the Crusaders rattled off a 12-3 run to end the set, rallying from the deficit and entering the in-game break up two sets.

Milwaukee claimed all of the momentum out of the locker room in the third set, scoring the first eight points of the period and eventually leading 11-1. Three kills from Victor helped Valpo score four straight to cut into the deficit, and later in the frame, trailing 15-8, Vanden Berg served a pair of aces during a five-point spurt which brought the Crusaders back to within 15-13.

At 17-14, Valpo's offense took center stage, as Dent and Victor posted back-to-back kills and then Dooms put down two straight kills, the second of which completed the turnaround and gave the Crusaders an 18-17 lead. Valpo pushed the lead to 22-20 on a Vanden Berg kill, but Milwaukee scored four of the next five to earn set point at 24-23. A Beil kill staved off one set point chance from the Panthers, but a kill and a Crusader error gave the third set to UWM. Then, in the fourth set, Milwaukee reeled off five points in a row to turn an 18-18 tie into a 23-18 advantage, eventually setting up the decisive fifth set.

For the second straight night, Vanden Berg had a huge match offensively, as her 23 kills were not only a career high, but the most by a single Crusader in over two years. The junior hit at a .391 clip for the match, committing just five errors. Five Crusaders in all finished the night in double figures in kills, as Dooms registered 14, Beil 13 and Victor and Dent 10 apiece. Freshman Kelsey Berrington (Britton, Mich./Tecumseh) handed out 33 assists to go with 31 from junior Ariel Cudney (LaPorte, Ind./LaPorte).

Vanden Berg posted three of Valpo's five service aces on Saturday and also was in on six of the Crusaders' 13 total team blocks. Victor was part of seven rejections as well. On the back line, redshirt sophomore Lindsey Hauch (Coloma, Mich./Coloma) led the way with 26 digs, while senior Taylor Root (Jenison, Mich./Jenison) posted 23 digs and Dooms 21. Dooms and Berrington (10 digs) each ended the night with double-doubles.

Milwaukee (8-12, 3-4 Horizon) got a Horizon League season-best 17 blocks from Rachel Neuberger, while Julie Kosinske led the Panthers with 17 kills and 24 digs and was also in on eight blocks. The Crusaders ended the night out-killing the Panthers by a 77-57 margin.

Valparaiso (13-9, 5-2 Horizon) opens up the second half of league play at the ARC on Friday evening at 7 p.m. against Loyola. The match can be heard live on WVUR (95.1 FM, Valparaiso) and seen live on the Horizon League Network, with links for the live audio, video and stats available at www.valpoathletics.com.