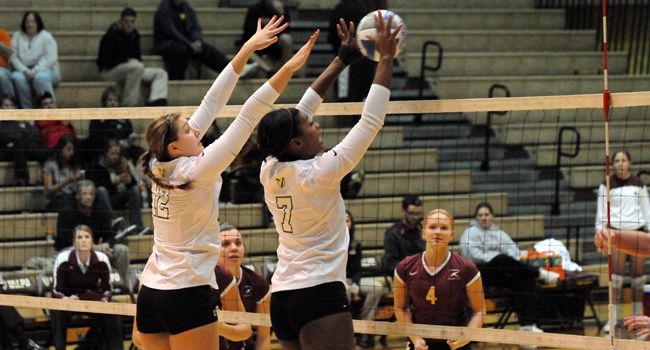 The Crusaders totaled 20 team blocks on Friday against the Ramblers, posting five apiece in sets one, two and five, three blocks in set three and a pair in set four.  The 20 blocks was one shy of the program record for blocks in a single match and was the most by a Valpo team in over seven years.  Junior Ellen Vanden Berg (Little Chute, Wis./Little Chute) led the way with a career-high 11 rejections, matching the second-most in a five-set match in program history, while redshirt sophomore Kelsey Victor (Logansport, Ind./Logansport) added eight blocks and sophomore Morgan Beil (St. Louis, Mo./Marquette) posted seven.

Valpo looked to have the first set under control, leading 21-15 with the serve, but the Ramblers reeled off eight straight points to go ahead 23-21.  Kills by Vanden Berg and junior Sarah Dooms (Greenwood, Ind./Center Grove) followed by a Loyola hitting error gave the Crusaders set point at 24-23, but three straight Rambler kills gave the opener to Loyola.  The second set was tight throughout, featuring ten tie scores, but Valpo never let the Ramblers gain the outright lead.  A kill by Beil put Valpo ahead 24-23 for the second straight set, and following a Loyola kill, the Crusaders got a kill from Victor followed by a block from Dooms and Vanden Berg to send the match into the in-game break tied at one set apiece.

The third set was all Valpo, as the Crusaders jumped out to leads of 7-1 and 13-4 and never trailed.  The lead never fell below six points as the Crusaders earned the two sets to one lead.  Valpo looked to put the match away in the fourth set, scoring four points in a five-point span thanks to two kills by Vanden Berg and one each from Dooms and senior Mary Dent (Chicago, Ill./Von Steuben) to turn a 17-17 tie into a 21-18 lead.  But following a Loyola timeout, the Ramblers scored the final seven points of the set to send the match to a decisive fifth set.

Loyola got out to a quick start in the final frame, forcing a Valpo timeout at 5-2.  The Crusaders scored six of the next eight points, however, including two blocks and a kill from Beil, to claim an 8-7 lead at the halfway point.  After falling behind 10-9, Beil tallied another kill and Vanden Berg and Victor combined on a block to put Valpo ahead 11-10.  Loyola scored the next three on a kill and two Crusader errors to go ahead 13-11, but Valpo answered with kills by Dooms and Den to make it 13-all.  But a pair of Rambler blocks would end the set and the match in Loyola’s favor.

“I’m extremely disappointed in this loss tonight,” said Crusader head coach Carin Avery.  “When you’re ahead 21-18 in the fourth set at home with the chance to win the match, you have to be able to close out.  Then the way we ended the fifth game, by committing errors on Loyola’s last four points, was extremely disappointing as well.”

Valparaiso (13-10, 5-3 Horizon) looks to bounce back Saturday night as the Crusaders host UIC in Horizon League play.  The game can be seen live on the Horizon League Network and heard live on WVUR, 95.1 FM, Valparaiso.  Links for the live video and audio, as well as live stats, will be available through www.valpoathletics.com.