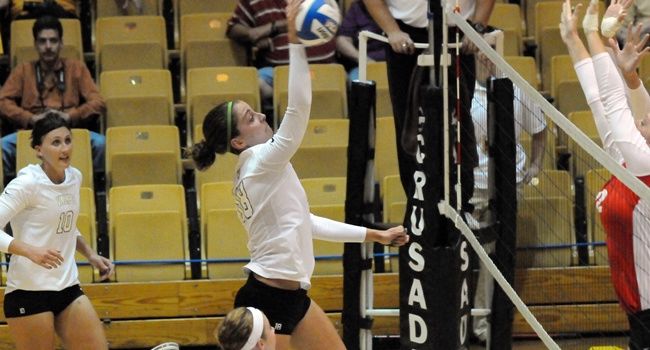 Hobbs shattered her previous career high of 11 kills after just three sets, and was nearly flawless on the attack, committing just two hitting errors while posting 17 kills on 28 swings.  Her .536 hitting percentage ranks third-highest in Crusader history by a single player in a five-set match.

“I’m very excited that we were able to get a mid-week win against a very good IUPUI team,” said Crusader head coach Carin Avery.  “I thought that our serve receive did a very nice job, as did our setters, in keeping a very good tempo for us offensively tonight, and I think that was a big reason we were able to get five hitters with more than ten kills.”

As they have all season long, junior Ariel Cudney (LaPorte, Ind./LaPorte) and freshman Kelsey Berrington (Britton, Mich./Tecumseh) shared the setting duties, with Cudney handing out a season-high 36 assists and Berrington 32 assists.  The latter picked up a double-double with 10 digs as well, one of four Crusaders to finish in double figures.  Senior Taylor Root (Jenison, Mich./Jenison) paced Valpo with 29 digs, Dooms added 23 for a double-double of her own and redshirt sophomore Lindsey Hauch (Coloma, Mich./Coloma) ended the night with 22.  At the net, Victor led the way, joining in on five of Valpo’s 10 team blocks.

With the score tied at 12-all in the opening set, Valpo went on an 8-3 spurt, featuring two kills each from Dent, Hobbs and sophomore Morgan Beil (St. Louis, Mo./Marquette), to go ahead 20-15.  IUPUI strung together three consecutive points to cut the advantage to two at 20-18, but kills from Victor and Vanden Berg provided separation and the teams would trade sideouts the rest of the set, with a Dooms kill ending the opener in Valpo’s favor.

The second set featured 13 tie scores and five lead changes, with an early three-point Valpo lead the largest advantage either side would gain.  In fact, the Jaguars never led by more than one point until the final margin.  The Crusaders led the tight set 23-22 after a solo block from Hauch, but a kill and an ace by the Jaguars gave them set point at 24-23.  A kill from Dooms sent the frame into extra points, and a setter dump by Berrington provided Valpo the chance to go up two sets to none.  But IUPUI would close the set with three straight kills to even the match into the in-game break.

The third and fourth sets were both decided fairly early on.  Valpo led early 4-2 in the third frame before the Jaguars went on a 13-4 run, capped by seven straight points, to take control.  The Crusaders rebounded with a stellar performance in set four, siding out at an 81% rate and hitting .341 with 16 kills and just two attack errors.  An early four-point spurt, including kills from Beil and Dooms and a block by Dooms and Vanden Berg, pushed a one-point lead to five at 10-5, and the Crusader edge never fell under four points the rest of the way.

Valpo carried the momentum from the fourth-set win into the fifth frame, never trailing in the deciding set.  The Crusaders scored the first two points on a Hauch kill and a Dooms service ace, one of three aces in the final set by Valpo on the serve.  IUPUI got within 3-2, but kills from Dent and Victor and a Berrington ace pushed the edge to 6-2.

The teams traded sideouts on the next five serves before a Valpo service error cut the Crusader lead to 8-6.  But that was as close as IUPUI would get, as the Crusaders scored six straight to secure the win.  Reflective of the night as a whole, four different Valpo players picked up kills during the 6-0 run, which was capped by a service ace from Cudney.  Fittingly, after IUPUI held off one match point chance, it was Hobbs with the final termination to close the come-from-behind win.

“I liked our focus and energy in the fourth and fifth sets after being down 2-1,” said Avery.  “We found a way to really control the match in the fourth set, and then went into the fifth set with a lot of momentum from that fourth set.  I thought our ability to side out in those two sets was a big reason why we won those sets so efficiently.”

IUPUI (16-9) was led by 16 kills from Kelsey Hoefer, while Bethany Fogler hit .481 with 13 kills.  Beth Howard led the Jaguar effort on the back line with 26 digs and Fogler picked up a match-best six blocks.

Valparaiso (15-10) closes out a four-match homestand on Friday night against Wright State.  The match will serve as Valpo’s annual “Dig Pink” match, part of the Crusader athletic department’s Breast Cancer Awareness Week.  The match can be seen live on the Horizon League Network and heard live on WVUR, 95.1 FM, Valparaiso.  Links for the live video and audio, as well as live stats, will be available through www.valpoathletics.com.