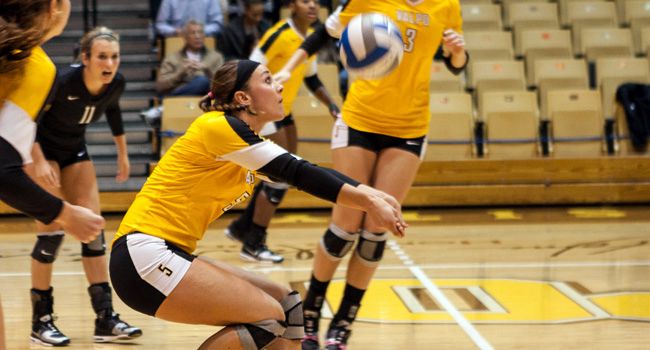 This Week in Crusader Volleyball: Valparaiso concludes a four-match homestand on Friday evening as the Crusaders play host to Wright State at the ARC in their annual “Dig Pink” match. Valpo then steps out of league play for the final time on Tuesday night, traveling to play at Chicago State.

Previously: Valpo split a pair of Horizon League matches at home last weekend, falling to UIC in five sets before rebounding with a four-set victory over UIC. Then, on Tuesday evening, the Crusaders rallied from a 2-1 deficit to down IUPUI in five sets in non-league action.

Next Up: The Crusaders stay on the road next weekend as the regular season starts to wind down, making the eastern Ohio swing in the Horizon League road schedule. Valpo will face Youngstown State Friday night, Nov. 2 before taking on Cleveland State Saturday afternoon, Nov. 3.

Following the Crusaders: Live video for Friday night’s match will be available through the Horizon League Network, with the audio available on WVUR, 95.1 FM, Valparaiso. Links to the live video and audio, as well as to live stats for both matches, can be found at www.valpoathletics.com.

Head Coach Carin Avery: Over her 10-plus years as head coach, Carin Avery has won 256 matches and has led Valpo to three league regular season and tournament titles, as well as three NCAA Tournament appearances. A two-time league Coach of the Year, Avery has coached 42 All-League recipients over her tenure as Crusader head coach. She is Valpo’s all-time leader in both victories and winning percentage, and now owns 311 career victories overall.

Scouting the Opposition: Wright State enters Friday at 2-24 overall and still looking for its first Horizon League win. Heidi Splinter averages a team-best 3.41 kills/set, while libero Katie Glassmeyer posts 4.79 digs/set in the back. Chicago State is also 2-24, with a match at NJIT to play on Saturday prior to Tuesday’s meeting. Sydney Van Munster leads the team with 2.21 kills/set on .244 hitting while also registering a team-high 0.77 blocks/set.

Block Party: The Crusaders’ presence at the net was a force to be reckoned with last weekend. Valpo tallied 20 total blocks on Friday against Loyola, one shy of the program record for blocks in a match and the most by a Crusader squad in over seven years. Then, as a follow-up, the Crusaders totaled 15 blocks in Saturday’s four-set win over UIC, matching the most in a four-set match by a Valpo team since the move to 25-point rally scoring. Following a 10-block performance against IUPUI, the Crusaders have reached double figures in blocks in four straight matches after reaching double digits just five times in their first 21 contests.

Vanden Berg Leads the Way: Leading the charge at the net was junior Ellen Vanden Berg. No Crusader had ever registered more than 10 blocks since the move to 25-point rally, but on back-to-back nights, Vanden Berg tallied 11 blocks each match. The performances rank among the top-15 in program history, and Vanden Berg became the first player since Liz Mikos in 2003 to reach double digits in blocks in back-to-back matches.

Everybody Blocks: Vanden Berg was just one of four Crusaders to match or break career highs for blocks last weekend. Junior Sarah Dooms tied her career best with four blocks against Loyola, while senior Mary Dent matched her career high with four rejections in the win over UIC. Also against the Flames, junior Janelle Hobbs chipped in on six blocks to set a new career best as well.

Stellar on the Attack: One match after establishing her new career high for blocks, Hobbs led the way on the attack in the win over IUPUI. The junior smashed her previous career high of 11 kills en route to tallying a team-high 17 kills in the five-set win. Hobbs put down her 17 kills while committing just two errors and swinging at a .536 clip, the second-highest percentage in a five-set match by a Crusader since the move to 25-point rally scoring.

Into the Top-10: Senior libero Taylor Root vaulted into the top-10 in NCAA history in career digs early in the third set against Green Bay on Oct. 12 and is poised to continue to move up the chart, entering Friday with 2,565 digs, currently placing her ninth in NCAA history. Root is 18 digs shy of eighth place, and looking ahead, would need to tally 117 digs the remainder of this year to crack the top-five. She is already the highest-ranked player to have played her entire career under 25-point rally scoring, as opposed to 30-point rally or 15-point sideout.