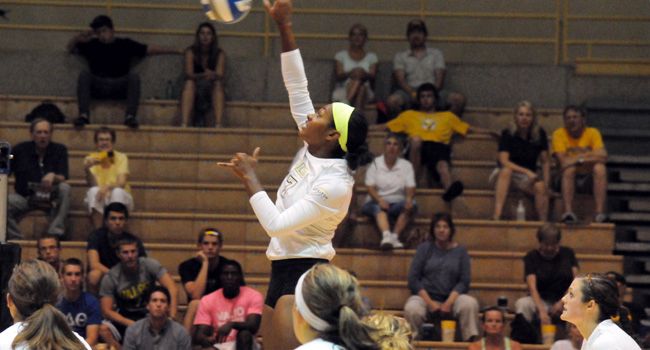 This Week in Crusader Volleyball: The Valparaiso volleyball team closes out its regular season at the ARC this weekend, hosting Green Bay on Saturday night and Milwaukee on Sunday afternoon. Sunday also marks Senior Day for the Crusader program, as Mary Dent and Taylor Root will be honored for their four years with the team.

Previously: Valpo split its swing through northeastern Ohio last weekend. The Crusaders pulled out a tightly contested four-set match at Youngstown State on Friday, before falling 3-2 after rallying from two sets down against Cleveland State on Saturday. Redshirt sophomore Kelsey Victor was honored as the Horizon League Offensive Player of the Week for her production in the two matches.

Next Up: The Horizon League Championship begins on Friday, November 16 with a pair of quarterfinals. Valpo is still in play for the second seed, which would earn the Crusaders a bye into Saturday’s semifinals. The tournament will be played at Cleveland State, the league’s regular season champion.

Following the Crusaders: Live video for both matches this weekend will be available through the Horizon League Network. Links to the live video, as well as to live stats for both matches, can be found at www.valpoathletics.com.

Head Coach Carin Avery: Over her 10-plus years as head coach, Carin Avery has won 259 matches and has led Valpo to three league regular season and tournament titles, as well as three NCAA Tournament appearances. A two-time league Coach of the Year, Avery has coached 42 All-League recipients over her tenure as Crusader head coach. She is Valpo’s all-time leader in both victories and winning percentage, and now owns 314 career victories overall.

Series Notes: Valpo leads the all-time series with Green Bay, 19-9, including a three-set sweep in the most recent matchup earlier this season in Green Bay. Taylor Root picked up 34 digs in the sweep, a NCAA season high for digs in a three-set match. The Crusaders trail the all-time series with Milwaukee, 18-14, but took down the Panthers in five sets earlier this year in Milwaukee. Ellen Vanden Berg tallied a career-high 23 kills in the win.

Scouting the Opposition: Green Bay enters the weekend at 14-12 overall and 5-7 within the league, playing Wright State on Friday night prior to coming to Valpo. Lyndsay Zabkowicz leads the team with 3.01 kills/set, while Brittany Groth paces the Horizon League with 6.16 digs/set. Milwaukee is fighting for a league tournament berth, sitting at 3-9 in the league and 8-18 overall entering this weekend. Julie Kosinske averages a team-high 3.75 kills/set and also contributes 3.12 digs/set, while Rachel Neuberger tallies 1.14 blocks/set.

Look at the Standings: While Cleveland State has already clinched the Horizon League regular season title (and the hosting duties for the league tournament), the Crusaders are right in the mix for the second seed and a bye into the semifinals. Valpo enters the weekend one-half game back of UIC for the second spot and is one half-game ahead of Loyola.

Pair of Seniors: Seniors Mary Dent and Taylor Root will be honored prior to the Crusaders’ regular season finale on Sunday against Milwaukee on Senior Day. The duo have seen the Crusaders win 87 matches over their four-year careers, including four in-season tournament titles. As freshmen, they helped Valpo to a second-place Horizon League finish and were part of a squad which advanced to the league championship match as sophomores in 2010.

Victor Posts Career Weekend: Redshirt sophomore Kelsey Victor had easily the most prolific weekend of her career last weekend to earn Horizon League Offensive Player of the Week accolades. Victor topped her previous career high with 15 kills (on .433 hitting) in the win over Youngstown State on Friday, but then out-did herself in the five-set match at Cleveland State, posting a match-high 21 kills on .500 hitting. For the week, Victor hit .469 while averaging an even four kills per set, and also added five blocks in each of the matches.

More League Awards: Victor became the third Crusader to earn weekly honors from the Horizon League office this season, a trio which has combined for six awards. Root has been named Defensive Player of the Week three times, most recently Oct. 29, and now owns a league-record 11 weekly honors. Junior middle Ellen Vanden Berg has also earned a pair of weekly awards from the league, picking up both an Offensive and a Defensive Player of the Week nod.

Moving On Up: Senior libero Taylor Root had a pair of 30+ dig matches last weekend, continuing her move up the NCAA career chart in digs. Root now ranks sixth in NCAA history with 2,676 career digs and is just six digs shy of fifth position and 18 shy of fourth place. Looking ahead, she would need 104 more digs for third place and 115 more digs for the second position. Root, who this season ranks tenth nationally averaging 5.73 digs/set, is already the highest-ranked player to have played her entire career under 25-point rally scoring, as opposed to 30-point rally or 15-point sideout.

Ten Straight 20-Win Seasons: With a pair of regular-season matches left, Valpo is just two wins shy of continuing an impressive streak of 20-win campaigns. The Crusaders won exactly 20 matches in 2011 and have won 20 or more matches every year since 2002, Avery’s first at the helm of the Crusader program. Valpo is one of just 12 programs nationwide to have won at least 20 matches in each of the last ten years, a group which also includes Colorado State, Dayton, Florida, Hawai’i, Missouri State, Nebraska, Ohio, Penn State, Stanford, UNI and Western Kentucky.