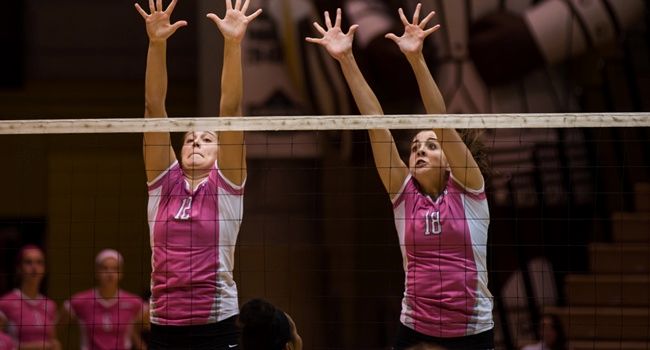 The Valparaiso volleyball team swept its way to its 19th win of the season on Saturday evening at the Athletics-Recreation Center, defeating Green Bay in three straight sets (25-16, 25-15, 25-23).

On the eve of their Senior Day match, the pair of Crusader seniors led the way on Saturday.  Mary Dent (Chicago, Ill./Von Steuben) led all players with 13 kills and hit at a .370 clip.  Meanwhile, Taylor Root (Jenison, Mich./Jenison) picked up a pair of service aces and a match-high 27 digs.  Root leapfrogged past two players on the NCAA's all-time digs list on Saturday, moving into fourth position with 2,703 career digs.

“I thought we played a very good match tonight - every aspect of our game was at a pretty high level,” said Crusader head coach Carin Avery.  “Taylor and Mary both were phenomenal tonight.  They took full advantage of this being their last weekend at home, and it was so great to see them both play at such a high level.”

Junior Ellen Vanden Berg (Little Chute, Wis./Little Chute) had a solid match on both sides of the ball, hitting .333 with 11 kills and registering seven blocks, three of which were of the solo variety.  Sophomore Morgan Beil (St. Louis, Mo./Marquette) added nine kills as well.  Defensively, junior Sarah Dooms (Greenwood, Ind./Center Grove) finished the match with 11 digs and junior Janelle Hobbs (Hartland, Wis./Arrowhead) was in on five of Valpo's blocks.

“I just really thought everybody played very well tonight,” said Avery.  “Everyone who came in the match did their job well, and that’s the reason we were able to beat a very good Green Bay squad in three sets.”

Valpo got off to a quick start on Saturday night, jumping out to a 9-2 lead in the opening set and forcing Green Bay to use both of its timeouts.  A 6-2 run later in the frame brought the Phoenix back within 17-14, but the Crusaders scored seven straight points, including three consecutive blocks, to cement away the opening frame.

The second set was tight early on, as back-to-back points by the Phoenix tied the set at 10 apiece.  Valpo ran off five straight points to claim the lead for good, including two kills from Dent and capped by a service ace from freshman Kelsey Berrington (Britton, Mich./Tecumseh).  Then, leading by four points at 19-15, the Crusaders scored six consecutive points to head into the in-game break up two sets to none, a run which included two kills each by Vanden Berg and Dent.  Valpo totaled 16 kills in the second set and hit at a .400 clip.

A 7-1 run at the midway point of the third set put Valpo ahead 14-9, but the Phoenix would rally to make the third set the tightest of the night.  A 7-1 Green Bay run gave the Phoenix an 18-17 lead before the Crusaders posted four straight kills to go up 21-18.  The Phoenix responded with four of the next five points to knot the set at 22-all.  But first Dent and then Beil tallied kills to put the Crusaders on the verge of the sweep, and on its second set point chance, Valpo closed the match on a kill by redshirt sophomore Kelsey Victor (Logansport, Ind./Logansport).

Green Bay (15-13, 6-8 Horizon) was led by 11 kills from Lyndsay Zabkowicz, but no other Phoenix attacker ended the night with more than five kills.  Brittany Groth paced the Phoenix in the back line with 22 digs.

Valparaiso (19-11, 9-4 Horizon) closes out the regular season at the ARC on Sunday afternoon at 2 p.m. against Milwaukee on Senior Day, as the Crusaders' seniors are honored in their final home match.  The match will be broadcast live on the radio on WVUR, 95.1 FM, along with video on the Horizon League Network.  Links for the live audio and video, as well as live stats, will be available at www.valpoathletics.com.