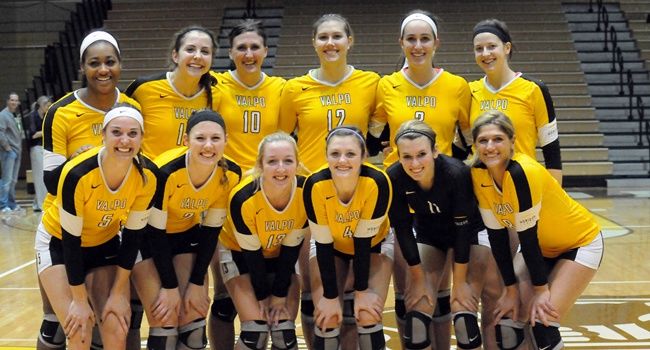 Senior Day was a memorable day at the ARC for Valparaiso volleyball seniors Mary Dent (Chicago, Ill./Von Steuben) and Taylor Root (Jenison, Mich./Jenison), as the Crusaders swept Milwaukee 3-0 (25-17, 25-21, 25-19). The win was Valpo's 20th of the 2012 season, extending the program's streak of 20-win campaigns to 11 consecutive seasons.

"I have no words to describe how excited I am to win 20 matches again this season," said Avery. "We had one of our toughest early-season schedules in a long time, and I knew it would come down to the wire for #20. I'm so excited for Mary and Taylor that we could do it on their senior night at home."

Meanwhile, the duo of Dent and Root, who were honored prior to Sunday's match as part of Senior Day ceremonies, helped Valparaiso to its 89th victory over their four-year careers. Dent followed a standout performance on Saturday by tallying eight kills, two blocks (one solo) and a dig against the Panthers. Meanwhile, Root had the second-lightest workload in the back line of her home career, tying for team-high honors with just 10 digs in the sweep and adding three assists as well.

"It's indescribable what Mary and Taylor have done for the Valpo volleyball program," said Avery. "It's not just what they've done for the program on the court, but also what people don't see inside the locker room and how they represent the program as people."

Cudney highlighted an excellent service match from the Crusaders on Sunday, picking up a season-high four service aces without committing an error, three of which came in a four-point stretch early in the third set. Berrington and junior Sarah Dooms (Greenwood, Ind./Center Grove) added two aces apiece as Valpo totaled eight service aces.

"I think our serving this entire weekend was a bright spot for us," said Avery. "Not only were we able to get a lot of aces, but I thought we took both teams this weekend - two teams with very good middle hitters - out of system a lot."

Dooms matched Root's effort in the back row with 10 digs, as the Crusaders needed to pick up just 43 digs over the match's three sets. Valpo's block was solid on Sunday as well, with 11.5 team blocks, led by a career-high seven from junior Janelle Hobbs (Hartland, Wis./Arrowhead). Junior Ellen Vanden Berg (Little Chute, Wis./Little Chute) was in on five rejections as well.

Both of Berrington's aces came during a five-point spurt in the opening set which turned a 9-8 deficit into a 13-9 Crusader lead, also featuring a pair of kills from Beil. Valpo never trailed in the opener after that point, slowly pulling away and eventually ending the frame on a second-touch attack from Berrington.

Valpo ran out to a quick 6-2 lead early in set two and led through the halfway point, but four straight points by the Panthers tied the set at 16-all. Valpo re-gained the lead, but was only up 20-19 until a kill from Dent and a Panther error pushed the lead to three points. The Crusaders answered a pair of sideouts from Milwaukee with sideouts of their own, and serving for set point at 24-21, Victor picked up a big kill to give Valpo the two-set lead into the locker room.

Milwaukee led early in the third set before the aforementioned Cudney service run gave Valpo an 8-5 lead. The Panthers tied the set at 11 and 12, and while a four-point run gave the Crusaders a 16-12 edge, Milwaukee closed back to within 17-15. But Valpo responded with six straight points, and despite a four-point run from the Panthers, back-to-back blocks by Hobbs, first combining with Vanden Berg and then with Beil, ended the match and the Crusaders' home season in an emphatic manner.

Julie Kolinske led Milwaukee (9-19, 4-10 Horizon) with 11 kills, but was the only Panther to end the night in double figures. Anna Bartz led all players with 13 digs.

Valparaiso (20-11, 10-4 Horizon) finished the league regular season in a tie for second place, but will be the third seed for the upcoming Horizon League Championship. The Crusaders will play Friday evening at a time to be determined against sixth-seeded Youngstown State in Cleveland, Ohio. Live stats and live video through the Horizon League Network will be available at valpoathletics.com.