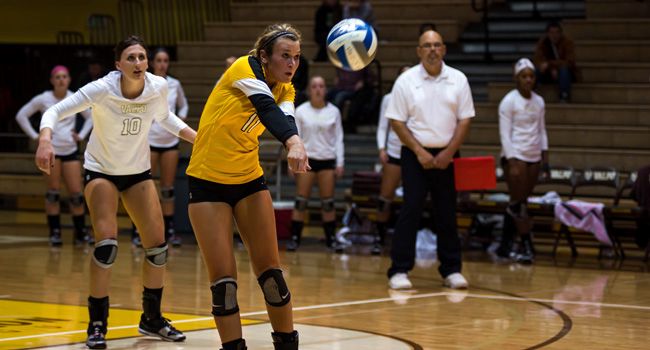 “Volleyball is such a funny sport – you feel like you have all the momentum in the world, and it shifts on you,” said head coach Carin Avery. “You have to give UIC a lot of credit, because they came out very aggressive in the third set after we won the first two and continued right through the end of the match.  Offensively, they really dominated for the whole match, and that was the reason they won tonight.”

But UIC rallied in retaliation, scoring four straight to force a Valpo timeout at 17-15.  The Crusaders were able to keep a small advantage as the set neared its conclusion, as kills by Hobbs and senior Mary Dent (Chicago, Ill./Von Steuben) helped Valpo to a 22-19 lead.  The Flames responded with four kills in a five-point stretch to tie the set at 23-all, however.  Sophomore Morgan Beil (St. Louis, Mo./Marquette) registered a kill to give the Crusaders set point at 24-23, but the Flames answered with another kill to force extra points.  A pair of UIC errors would end the opener in Valpo’s favor.

Set two saw a back-and-forth early going, with UIC taking a 12-11 lead on back-to-back kills.  But Valpo came back with a 7-1 run to take the lead for good, with two kills by Vanden Berg and one each from Beil and Victor as part of the spurt which gave the Crusaders an 18-13 lead.  The teams would just trade sideouts the rest of the way, as a Vanden Berg kill closed the set as Valpo claimed a 2-0 lead into the locker room.

Valpo scored the first point of the third set on a UIC attack error, but the Flames scored six of the next seven points to take control early.  The Crusaders closed to within 7-5 thanks to kills from Vanden Berg and Victor, but UIC went on a 9-2 run to push its lead to nine points, and Valpo would get no closer than eight points the rest of the way as the Flames extended the match.

Set four turned out much the same way as the third frame, as the Crusaders scored three of the first five points before UIC went on a 9-1 run to go ahead 11-4.  The Flames extended their lead to 11 points on multiple occasions, and Valpo could not cut any closer than six points into UIC’s lead as the match went to a decisive fifth set.

UIC scored the first two points of the fifth set, but after the teams traded a pair of sideouts, Valpo rattled off four straight points on a pair of kills from Dent, a block by Beil and Victor and a UIC error to go ahead 6-4.  Kills by Dent, Beil and Vanden Berg answered UIC kills as the teams traded sideouts, leaving Valpo with a 9-7 advantage.

Back-to-back points for the Flames tied the fifth frame at nine-all, and kills by first Hobbs and then Dent were answered by UIC kills, making it 11-11.  A service ace by the Flames forced a Valpo timeout, trailing 12-11, and UIC then came up with a solo block to make it 13-11.  Beil and Hobbs combined on a block to bring Valpo back within one, and a UIC error tied the set at 13 apiece.  But consecutive kills by the Flames ended their comeback victory and closed the Crusaders’ season.

Senior Taylor Root (Jenison, Mich./Jenison) paced the Valpo effort on the back line with 23 digs to go along with 14 from Dooms and 13 apiece by Berrington and redshirt sophomore Lindsey Hauch (Coloma, Mich./Coloma).  Cudney added 10 digs as well as both Crusader setters picked up double-doubles.  At the net, Vanden Berg and Victor each were in on five blocks, and Hobbs and Beil added four apiece.

Aubrey Sniegowski posted 20 kills, Nicole Allgood 18 and Kelsey Safranek 17 to lead UIC (19-12) on Saturday.  Mary Kate Imrie handed out 63 assists and also picked up 17 digs, while Sara Sternard led all players with eight blocks, including four of the solo variety.

The loss closes Valparaiso’s season at 21-12 and ends the career of two Crusader seniors.  Dent finished her career with 532 total kills, including a single-season high 233 as a senior, as well as 73 blocks.  Meanwhile, Root ended her career ranked fourth in NCAA history with 2,752 career digs, while her 735 digs in 2012 are third-most in a season in Crusader volleyball history.

“The hardest part about tonight is watching the end of the careers of Mary and Taylor,” said Avery.  “I wish that we could have taken them to the NCAA tournament because with their dedication, hard work, and leadership - everything they’ve done for this program – it would have been fitting for them to go out in the NCAA tournament.  But all seasons come to an end sometime, and it was a fun season full of a lot of great accomplishments.  Our goal is always  to make the NCAA tournament, but only one team can do that from our league.  So we try never to base our season’s success on the last match – the season is long, and there were definitely a lot of great moments in 2012.  What Mary and Taylor have done for this group is going to carry on for years.”