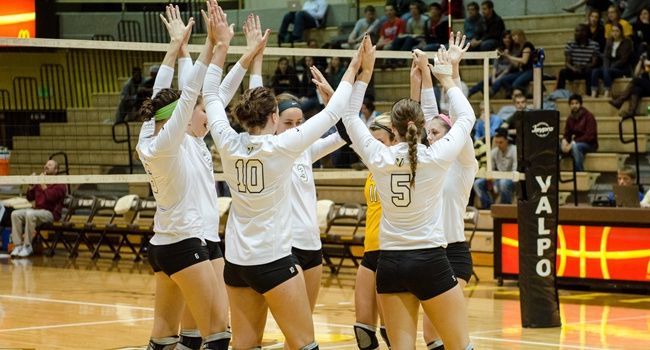 One of just 11 volleyball programs in the nation to win at least 20 matches every season since 2002, Valparaiso will be in search of its 12th straight 20-win campaign in 2013, facing a schedule announced today by Crusader head coach Carin Avery. The schedule is highlighted by a five-team tournament the Crusaders will host at the ARC during the second weekend of regular season action.

The season kicks off for the Crusaders in Florida, as Valpo will fly down to Orlando to play in a tournament at UCF on Aug. 30-31. Valpo will face off against Arkansas-Pine Bluff, Alabama State and UNF, which won 22 matches in 2012, in addition to the host Knights.

The Crusaders then return home to the ARC to host a five-team tournament Sept. 6-7. The tournament features eight matches over the two days, including four contests for Valparaiso. Valpo opens the tournament against Army, which comes off a 20-win season last year, Friday, Sept. 6 at 11:30 a.m. before taking on Eastern Michigan that night at 7 p.m. The Eagles are led by head coach Kim Berrington, mother of Crusader setter Kelsey Berrington.

Valpo continues play in its own tournament Saturday morning, Sept. 7 against Rhode Island at 11:30 a.m. The Crusaders then cap the tournament with a showdown against Big Ten foe Iowa Saturday night at 7 p.m.

The next two weekends see the Crusaders hit the road for a pair of tournaments prior to the start of league play. Valpo will compete in a tournament Evansville Sept. 13-14, taking on Memphis and SIU Edwardsville as well as the hosts, and then will take part in the Blue & White Classic, hosted by Buffalo, Sept. 20-21. Valpo will face a pair of squads which made the NCAA Tournament in 2012 at the Buffalo tournament - Ohio State and Maryland Eastern Shore.

The Horizon League slate, a double round-robin schedule among the league's eight teams, begins Sept. 28 as the Crusaders make the short trip to the Windy City to take on UIC. Valpo will open home league play Friday night, Oct. 4 against Green Bay and will close out the 2013 home campaign on Saturday afternoon, Nov. 9 versus Youngstown State. Sprinkled throughout the league schedule are a trio of non-league road matches as well, as the Crusaders face IUPUI (Oct. 15), Illinois State (Oct. 22) and Chicago State (Oct. 28).

The Horizon League Championship will be hosted by the league's regular season champion and will run Nov. 22-24. The winner of the league tournament earns the league's automatic bid into the 2013 NCAA Tournament.