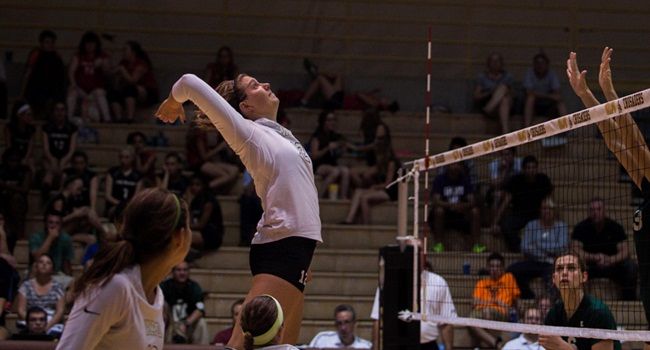 The Crusaders opened the tournament against Army a little before noon on Friday and took control of the opening set fairly early on, using a 7-1 run to erase an 8-6 deficit and claim the lead for good.  The second set saw Valpo tie the frame on multiple occasions through the midway point into the late stages, the latest coming at 19-all.  But the Crusaders could never gain the outright lead, and Army scored five straight points to send the match into the in-game break tied at one set apiece.

Army (1-4) looked in control as the third set moved past the midway point, but trailing 15-12, the Crusaders scored four straight points to take the lead. The next few points were back and forth, until trailing 19-18, Valpo scored six straight, including a kill and a solo block by redshirt junior Kelsey Victor (Logansport, Ind./Logansport), to take control and go up two sets to one. Then in the fourth frame, the Crusaders put together an early 9-1 run and kept Army at arm's length the rest of the set to close out the win.

Berrington added 15 digs on the back line to record a double-double, as she was one of three Crusaders to finish in double figures – freshman Morganne Longoria (Burlington, Wis./Burlington) tallied 22 digs and senior Sarah Dooms (Greenwood, Ind./Center Grove) picked up 21 digs. Victor paced the defense at the net, as the redshirt junior was part of a team-high five of Valpo's 10 team blocks.

“Winning at this level is hard, so we’ll take every win we can get,” said Crusader head coach Carin Avery.  “This morning's match against Army was definitely a struggle – we made a lot of uncharacteristic errors, and because of that, it was hard for us to get a rhythm going.  But we figured out a way to do enough good things to come out with the win.  I thought Morgan and Ellen really hung tight for us and got some big kills when we needed them.”

The night match pitted the Crusaders against Eastern Michigan, and also featured a family battle. The Eagles' head coach, Kim Berrington, is also the mother of Valpo sophomore setter Kelsey Berrington, and the storyline spawned a feature piece on the Horizon League website and also was highlighted in the NCAA's weekly volleyball notebook.

The match proved to be a tight back-and-forth affair, with 36 ties and 21 lead changes through the first four sets, while each of the first two frames went into extra points. Eastern Michigan seemingly had the opening set on its side, scoring five straight points to go up 21-16 and earning set point at 24-20. But a block by Vanden Berg and senior Janelle Hobbs (Hartland, Wis./Arrowhead) started a rally, as the sizable contingent of Crusader fans got louder and louder with each passing point.

A Dooms kill forced EMU's first timeout, and following a pair of Eagle errors, EMU used its second timeout with the score tied at 24-all and the Crusaders having fought off four set points. Out of the stoppage, another Eagle hitting error gave Valpo its first set point at 25-24, and Vanden Berg finished the frame with a kill as Valpo claimed the opener.

The tables were turned on Valpo in the second set, as despite a 7-0 run in the middle of the stanza, Eastern Michigan rallied to take a 22-21 lead. A kill by Dooms and an EMU error returned the lead to Valpo's side of the board at 23-22, but the Eagles scored four of the last five points to knot up the match at one set each.

Valpo never trailed after being down 2-1 in the third set, but the Eagles stayed within striking distance until the Crusaders scored four straight to push a miniscule 20-19 edge to 24-19. Eastern Michigan would force the decisive fifth set by closing the fourth with four straight points, taking advantage of 12 Crusader attack errors in the frame.

The fifth set turned out to be all Valpo. Beil picked up two early kills and Dooms one as well as the teams traded points early on to 3-3. The Crusaders then strung together three straight, including a solo block from Vanden Berg, who also combined with Victor on a rejection, to go ahead by a 6-3 count.

A kill by the Eagles slowed Valpo's run, making it 6-4 Crusaders, but Valpo closed the match with nine of the last ten points. Vanden Berg picked up a kill, a block and an ace during the spurt, while Dooms and Hobbs also had kills and Campbell an ace. With a multitude of match points, it only took one for Valpo to end the hard-fought win, as Beil and Hobbs combined on a rejection to send the Crusader fans home happy.

“The fifth set was just unbelievable,” said Avery. “We came out really focused, but yet relaxed. I thought we made some good adjustments going from the fourth set to the fifth set. I felt we took Eastern Michigan out of its rhythm a bit, and then most importantly, we executed near-flawlessly on our side.”

It was a balanced offensive effort in the win over the Eagles, as five of Valpo's six attackers finished with double-digit kills. Dooms paced the Crusaders with 15 kills, while Campbell and Vanden Berg posted 12 each and Beil and Victor each picked up 10. Berrington handed out 32 assists and Cudney 25 as well.

In the back, Dooms and Longoria tied for team-high honors with 22 digs as Valpo out-dug Eastern Michigan (2-3) by a 92-75 count. Campbell added 16 digs, Berrington 15 and Cudney 11 as the trio all posted double-doubles. At the net, the Crusaders totaled 13 team blocks, led by seven from Vanden Berg and five by Beil.

“Every time we play Eastern Michigan, it seems like it's gone five sets, and I think that says a lot about the way both Kim and I coach our teams,” said Avery. “Our teams are so similar that it’s hard to play each other, because we do and teach a lot of the same things.  I think that really made the match tonight fun.  Just like this morning, I thought we had too many unforced errors – we're too good and have too many great attackers to have so many unforced errors. That's definitely something we know we need to improve on tomorrow to be successful. Part of it was the fact that Eastern Michigan made us uncomfortable – they knew what to take away from us, and we played into it at points. They are a very good team, and to beat them is a really good win for us.”

In Friday's middle match of the Popcorn Classic, Iowa swept Rhode Island 3-0 (25-21, 25-12, 25-22). Valparaiso (6-0) looks to match its best start under Avery and claim the tournament championship on Saturday as it faces Rhode Island at 11:30 a.m. and Iowa at 7 p.m. Both of the Crusaders' matches will feature free live video through the Horizon League Network, while all five tournament matches on Saturday will have live stats – links for both will be available at ValpoAthletics.com.