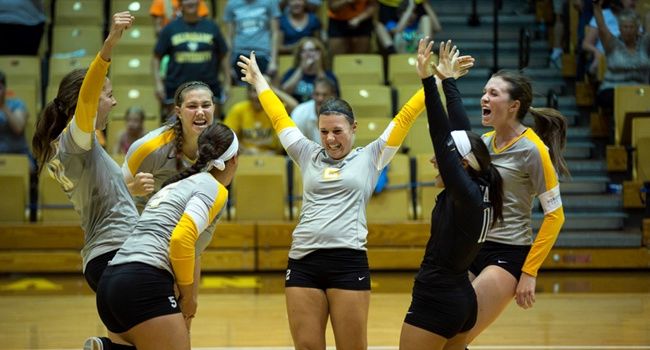 The eight straight wins to open the season match the Crusaders' best start ever, joining the 2003 squad which also won its first two in-season tournaments en route to an 8-0 start. That team ended up advancing to the main bracket of the NCAA Tournament for the first time in program history. The weekend's capstone victory over Iowa marked the second straight season that Valpo has defeated a Big Ten team, while Saturday night's win was the Crusaders' first in program history at home over a Big Ten squad.

“Never having beaten a Big Ten team at home before, that was one of our small goals coming into the year,” said Crusader head coach Carin Avery. “With this great group of seniors and knowing the work they've put in over their four years - to see them get off to such a great start to the season, and then accomplish this goal and also win our tournament – as a coach, it's just very fulfilling to see that happen.”

Meanwhile, the tournament championship was the 17th in-season tournament title for Valpo under the guidance of Avery. It also is the fourth time in six tries that Avery has led the Crusaders to the title at their home tournament. Junior Morgan Beil (St. Louis, Mo./Marquette) was named Tournament MVP, while redshirt junior Kelsey Victor (Logansport, Ind./Logansport)and sophomore Kelsey Berrington (Britton, Mich./Tecumseh) joined Beil on the All-Tournament Team.

The Crusaders matched up with Iowa in what turned out to be the tournament championship match Saturday evening, as both teams entered the contest unbeaten on the weekend – Valpo 3-0 and Iowa 2-0. The opening set of the contest proved to be the only one that would not belie the close nature of the matchup, as the Crusaders took the lead early on and used a four-point run to go up 19-13 – a run which included an ace and a kill from Berrington and a kill by Victor. The lead would not fall under three points the rest of the way as Valpo claimed the opener.

In the second frame, it looked like Iowa would seize control early, as the Hawkeyes scored the first three points en route to an 8-4 lead that forced Valpo to use its first timeout. But the Crusaders fought back, eventually tying the set at 12-12 after a three-point spurt which included kills by Beil and Berrington.

The two squads then proceeded to trade points nearly non-stop until the end of the set, as 19 of the next 20 serves resulted in sideouts. Valpo claimed a one-point edge with the only non-sideout of the stretch, a service ace from freshman Emily Campbell (Grand Rapids, Mich./Forest Hills Central), at 17-16, but after the next 11 sideouts, Iowa got a kill from Erin Leppek to go up 23-22.

The Crusaders showed their resilience, however, as senior Ellen Vanden Berg (Little Chute, Wis./Little Chute) picked up back-to-back kills to give Valpo set point at 24-23. On set point, senior Sarah Dooms (Greenwood, Ind./Center Grove) took a hard swing that looked to be dug up by the Hawkeye defense, but miscommunication allowed the ball to fall to the floor harmlessly, giving the Crusaders the second set and a 2-0 lead into the in-game break.

Iowa held the edge in the early and middle stages of the third set, earning as much as a five-point lead at 16-11. But the Crusaders again rallied, stringing together five straight points thanks to four Hawkeye errors and a block by Vanden Berg and senior Janelle Hobbs (Hartland, Wis./Arrowhead), to tie the set at 16-all. Valpo eventually gained a two-point lead at 22-20 on a kill from Beil.

The Hawkeyes would not go quietly into the night though, scoring three straight points to take the lead. A Beil kill briefly tied things at 23-all, and after an Iowa kill gave the Hawkeyes set point, Campbell terminated to force extra points at 24 apiece. But a pair of Iowa kills gave the visitors the third set and sent the match to a fourth frame.

The fourth set proved to be the tightest of an extremely well-balanced match, featuring 15 tie scores and eight lead changes. Valpo attempted to take control, getting out to a 13-8 lead on the back of a 5-1 spurt, but Iowa proceeded to score seven of the next eight points to earn a 15-14 edge.

The Crusaders scored four of the next five points, but Iowa matched the run with one of its own to go ahead 20-19. After five consecutive sideouts tied the set at 22-all, freshman Morganne Longoria (Burlington, Wis./Burlington) stepped to the service line and delivered the biggest ace of her young career, as her serve clipped the net and fell in front of the Hawkeye back line to make it 23-22 Valpo.

Following a timeout, the Hawkeyes tallied a kill to again tie the set at 23 apiece, but Victor responded with a big kill to make it championship point Valpo at 24-23. Senior Ariel Cudney's (LaPorte, Ind./LaPorte) serve forced Iowa to send over a free ball, and Campbell put her swing off of Iowa's block and over its back line for the match-winning kill to make it eight straight Crusader wins.

“The Iowa match was just a great, high-level match,” said Avery. “Obviously, with so many ties, you can see how close it was. Both teams were digging so many balls and there were a lot of long rallies. It was just a fun, high-level match to be a part of, and I'm obviously very excited we were able to win. I also think it was great for us to have three close sets – it helps shows us early on how we respond in tight situations and prepares us for close sets in league play.”

It was a balanced Valpo offense in the win over Iowa (5-1), as five different Crusaders picked up at least nine kills. Campbell and Victor tied for team-high honors with 12 kills each, the latter doing so on .379 hitting, while Vanden Berg added 11 kills and Dooms and Beil chipped in nine apiece. Berrington handed out 30 assists and Cudney dished out 22 helpers.

Dooms led the Crusader effort on the back line with 21 digs to pace four Valpo players in double figures, as Longoria registered 15 digs, Berrington 12 and Cudney 11. Victor was part of seven of the Crusaders' nine team blocks and Vanden Berg was in on five rejections as well.

“I'm especially proud of our team for coming out with the win over Iowa because it was our fourth match in two days,” said Avery. “We were pushed all weekend with close matches, including a five-setter last night with Eastern Michigan and then a match with Rhode Island earlier where two sets went right down to the wire. With the long weekend and the conditions, we came into tonight's match a bit tired, but we hung in there mentally, which was key. If we were not strong mentally, there was no way we would have come out with the win tonight.”

Alex Lovell led all players, picking up 20 kills for the Hawkeyes in the losing effort. Bethany Yeager recorded 18 digs to pace Iowa in the back row.

In the Crusaders' first match of the day, they swept Rhode Island despite a pair of sets going right down to the wire. Valpo claimed the opening set as a 6-1 run made it 23-18 and the Crusaders held on from there, while they cruised to the win in the second frame. The Rams put together a 6-1 run late in the third set to make it 23-all, but a kill by Dooms and a Rhode Island (2-3) attack error closed out the Valpo sweep.

Dooms paced the Crusaders in the opener with 10 kills as five different players ended the win over the Rams with at least six kills. Longoria led all players with 21 digs, while Dooms (17 digs) and Berrington (18 assists, 10 digs) picked up double-doubles in the sweep. Rhode Island's Franki Darnold led all players with 12 kills and also posted a team-high 14 digs.

“This was our second tournament win of the year, and I think the fact we had three different players earn All-Tournament honors this weekend than did last weekend says a lot about our team,” said Avery. “Morgan's play at the net all weekend, and Kelsey Victor's play at the net today were big factors in our wins. Then I thought Kelsey Berrington, tonight against Iowa, played one of the best all-around matches of her career here at Valpo. But honestly, I think we could have given the awards today to any one of our players who contributed this weekend.”

Valparaiso (8-0) will take aim at the best start in program history next weekend as it travels to Evansville for a tournament which kicks off against Memphis on Friday, Sept. 13 at 4 p.m. CT. Live stats for all three of the Crusaders' matches next weekend will be available through ValpoAthletics.com.