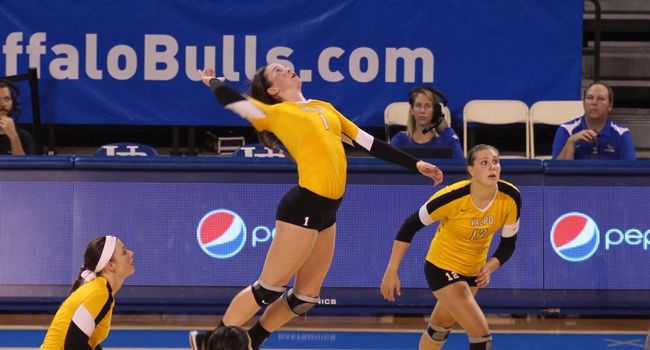 The Crusaders actually trailed in the opening set against Maryland Eastern Shore (1-11) into the second half of the frame, but down 16-14, the Crusaders went on a 7-2 run to claim a 21-18 lead. Then, after the Hawks scored three straight to tie the set at 21-all, Valpo scored four of the final five points to claim the opener. The Crusaders took control early in each of the final two sets en route to the sweep.

It was a balanced effort in the sweep of the Hawks, as senior Ellen Vanden Berg (Little Chute, Wis./Little Chute) paced Valpo with 10 kills on .400 hitting. Freshman Emily Campbell (Grand Rapids, Mich./Forest Hills Central) and senior Sarah Dooms (Greenwood, Ind./Center Grove) each added eight kills to go with 11 digs, while freshman Morganne Longoria (Burlington, Wis./Burlington) led the Crusader effort on the back line with 14 digs. Vanden Berg was in on six of Valpo's 10 total team blocks, and junior Morgan Beil (St. Louis, Mo./Marquette) chipped in on five rejections.

In the day's opener against nationally-ranked Ohio State, the Crusaders played point-for-point with the Buckeyes in the opening set, hitting at a .385 clip in the first frame. Valpo actually had a set point chance at 25-24, but an OSU kill kept the set alive and the Buckeyes eventually tallied 22 kills in claiming the opener. The Crusaders were within three points late in the second set at 22-19 before OSU scored three of the final four points, while Valpo never led in the final frame.

Dooms led the Crusaders against Ohio State (11-0) with nine kills, while Campbell and Vanden Berg added seven kills apiece. Longoria contributed 12 digs to go along with 11 digs from Dooms. Vanden Berg tied for match-high honors with six blocks as the Crusaders tallied eight total blocks against the Buckeyes.

Valparaiso (11-3) starts Horizon League play next weekend with a single match, as the Crusaders make the short trip to the Windy City to take on UIC. The match against the Flames is slated for a 2 p.m. start on Saturday afternoon, with live stats and live video available through ValpoAthletics.com.