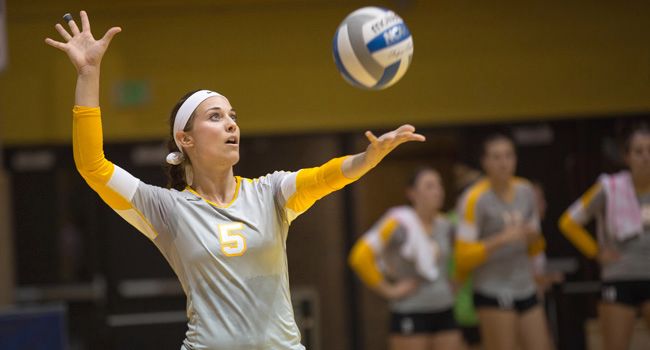 This Week in Crusader Volleyball: The Valparaiso volleyball team kicks off Horizon League play this weekend as the Crusaders make the short trip to Chicago to take on UIC Saturday afternoon. Valpo closes out pre-league play with a pair of tournament championships and an 11-3 record.

Previously: Facing a challenging tournament field at the Blue & White Classic in Buffalo, N.Y., the Crusaders posted a 1-2 record. Valpo fell in four sets to undefeated host Buffalo and were swept by undefeated #13 Ohio State before closing out tournament play with a sweep of Maryland Eastern Shore. Ellen Vanden Berg represented the Crusaders on the All-Tournament Team.

Head Coach Carin Avery: Over her 11-plus years as head coach, Carin Avery has won 273 matches and has led Valpo to three league regular season and tournament titles, as well as three NCAA Tournament appearances. A two-time league Coach of the Year, Avery has coached 37 All-League recipients over her tenure as Crusader head coach. She is Valpo’s all-time leader in both victories and winning percentage, and owns 328 total career victories in 13-plus seasons overall as a head coach.

Series Notes: The Crusaders and Flames have split 46 all-time meetings, but under Carin Avery, Valpo holds a 14-4 advantage in the series. UIC claimed two of three matchups last season, however, and eliminated Valpo in the Horizon League Championship semifinals, 3-2. Mary Dent and Ellen Vanden Berg tied for team-high honors with 14 kills, with the latter also picking up five blocks.

Scouting the Opposition: UIC enters the week at 5-9 on the 2013 campaign, with a mid-week contest against DePaul prior to opening league play. The Flames are allowing opponents to hit .231 against them and also pick up 2.75 blocks/set. MaryKate Imrie leads all Horizon League players, averaging 10.56 assists/set, while Justine Garcia ranks second in the league with 0.33 service aces/set.

Entering Horizon League Play: Through its first six years as a Horizon League member, the Crusaders have finished above .500 all six seasons, posting a record of 62-32 (.660) in league play since 2007. Valpo has also finished second in the league standings in three of those six years.

A Balanced Effort: The Crusaders have showcased their balance so far in 2013, both on the stat sheet and in their honors. Five different players have tallied between 109 and 123 kills, with Sarah Dooms pacing the squad at 123 terminations. Meanwhile, seven different Crusaders earned All-Tournament honors during pre-league play: Dooms, Morganne Longoria, Ellen Vanden Berg (x2), Morgan Beil (x2), Kelsey Victor, Kelsey Berrington and Emily Campbell. Dooms and Victor have also earned weekly awards from the Horizon League office as well.

Among the League’s Best: While with their balance, the Crusaders don’t have any players leading the league in any statistical category, as a team, Valpo paces the circuit in both opponent hitting percentage (.148) and digs (17.35/set), the latter mark ranking 11th nationally. Valpo also sits second in the league as a team in hitting percentage, kills and assists.

Beating the Big Ten: Entering last season, the Crusaders had never earned a win over a Big Ten squad. But following the Popcorn Classic, Valpo has now done so in back-to-back years, as the Crusaders defeated Indiana last season and then Iowa this year to secure the tournament title. The volleyball team was one of three Valpo teams (men’s/women’s soccer) to earn a win over a Big Ten program in a span of four days.