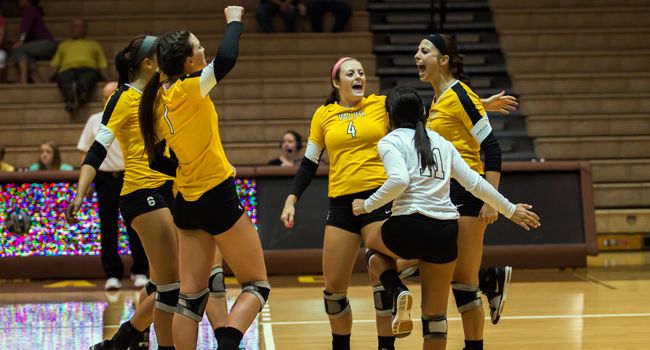 Previously: The Crusaders kicked off Horizon League play with a 3-1 victory at UIC last Saturday. The balanced team effort, in which Valpo trailed just once in the three sets it won, saw Emily Campbell lead the way with 12 kills, while Morganne Longoria tallied 26 digs.

Head Coach Carin Avery: Over her 11-plus years as head coach, Carin Avery has won 274 matches and has led Valpo to three league regular season and tournament titles, as well as three NCAA Tournament appearances. A two-time league Coach of the Year, Avery has coached 37 All-League recipients over her tenure as Crusader head coach. She is Valpo’s all-time leader in both victories and winning percentage, and owns 329 total career victories in 13-plus seasons overall as a head coach.

Series Notes: Green Bay - Valpo owns a 20-9 edge in the all-time series, including an 11-3 mark under Avery. The Crusaders swept the Phoenix in both matchups in 2012.
Milwaukee - The Panthers hold a slight 18-15 advantage in the series over the Crusaders and are 10-6 against Valpo since Avery took the helms of the Crusader program. Valpo did claim both matchups last season, however, winning 3-2 on the road and in straight sets at home.

Scouting the Opposition: Green Bay - The Phoenix enter the weekend at 7-7 overall and 2-0 in Horizon League play. Green Bay boasts a trio of hitters among the top-eight in the league in kills/set, led by Shannon Hurley’s 3.27 kills/set. Jillian Bauer paces the league with an even 5.00 digs/set.
Milwaukee - The Panthers enter this weekend at 6-8 and 2-0 in league play, playing at UIC Friday before coming to Valpo on Saturday. Rachel Neuberger ranks second in the league with a .329 hitting percentage, while Nicole Latzig is eighth in hitting percentage and ninth in blocks.

Home Court Advantage: For just the second time this year, Valpo returns home to play on its home court at the ARC - the Crusaders opened the home slate with four victories in the Popcorn Classic the first weekend of September. The 4-0 start at home this year improves the Crusaders’ mark on their home court to 43-12 (.782) since the beginning of the 2008 season.

Within Horizon League Play: Through its first six years as a Horizon League member, the Crusaders have finished above .500 all six seasons, posting a record of 63-32 (.663) in league play through last weekend’s win over UIC. Valpo has also finished second in the league standings in three of those six years.

A Balanced Effort: The Crusaders have showcased their balance so far in 2013, both on the stat sheet and in their honors. Five different players have tallied between 114 and 131 kills, with Sarah Dooms pacing the squad at 131 terminations. Meanwhile, seven different Crusaders earned All-Tournament honors during pre-league play: Dooms, Morganne Longoria, Ellen Vanden Berg (x2), Morgan Beil (x2), Kelsey Victor, Kelsey Berrington and Emily Campbell. Dooms and Victor have also earned weekly awards from the Horizon League office as well.

Record Book Watch: A number of Crusaders are making their marks on Valpo’s career record book as the 2013 season hits the halfway juncture. Sarah Dooms already ranks among the all-time top-10 in attacks (3,197 - 6th) and digs (1,418 - 7th) and is on pace to crack the top-10 in kills as well. Ellen Vanden Berg has tallied 328 blocks, eighth-most in program history, while her career hitting pct. of .254 would rank seventh all-time. Morgan Beil would rank second in Crusader history with her .272 hitting percentage as well. Meanwhile, Ariel Cudney has totaled 122 career service aces, 10th most all-time and just six shy of the fifth spot, while Kelsey Berrington ranks 10th with 1,116 career assists.

Beating the Big Ten: Entering last season, the Crusaders had never earned a win over a Big Ten squad. But following the Popcorn Classic, Valpo has now done so in back-to-back years, as the Crusaders defeated Indiana last season and then Iowa this year to secure the tournament title. The volleyball team was one of three Valpo teams (men’s/women’s soccer) to earn a win over a Big Ten program in a span of four days.