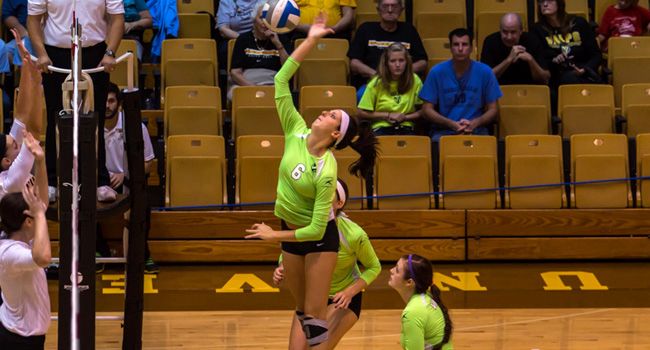 This Week in Crusader Volleyball: The Valparaiso volleyball team returns to the road this weekend, taking on the pair of Northeast Ohio Horizon League schools. The Crusaders play at Youngstown State on Friday night before taking on Cleveland State on Saturday afternoon.

Previously: Valpo overcame a one-set deficit twice in a 3-2 victory over Green Bay on Friday evening, but could not do the same on Saturday, falling in straight sets to Milwaukee. Janelle Hobbs hit .333 for the Crusaders over the two matches, while Emily Campbell and Sarah Dooms had double-doubles in the win over the Phoenix.

Head Coach Carin Avery: Over her 11-plus years as head coach, Carin Avery has won 275 matches and has led Valpo to three league regular season and tournament titles, as well as three NCAA Tournament appearances. A two-time league Coach of the Year, Avery has coached 37 All-League recipients over her tenure as Crusader head coach. She is Valpo’s all-time leader in both victories and winning percentage, and owns 330 total career victories in 13-plus seasons overall as a head coach.

Series Notes: Youngstown State - Valpo owns a 21-6 lead in the all-time series over the Penguins and have defeated YSU 11 straight times. Included in that streak is a sweep of the season series last year, as the Crusaders won both regular season meetings 3-0 before downing YSU 3-0 in the HL Championship quarterfinal.
Cleveland State - The Crusaders own a slight 15-13 advantage over the Vikings in the all-time series, but have dropped four straight matches over the last two seasons. Three of those four decisions have gone to a decisive fifth set.

Scouting the Opposition: Youngstown State - The Penguins are 10-8 overall and 2-1 in league play. The league’s leading team on the block, YSU boasts three of the top seven individually, including league leader Jenna Cavanaugh (1.36 blocks/set). Offensively, Missy Hundelt ranks sixth in the league in kills (3.06/set) and fifth in service aces (0.30/set).
Cleveland State - The Vikings enter the weekend 12-4 overall and 2-1 in HL play, with a Friday evening match against UIC on the docket as well. CSU leads the league in hitting pct., kills and aces. Maggie Hannon is leading the way for the Vikings, hitting a league-best .350 with a team-high 3.11 kills/set.

Doubling Up: Both Emily Campbell (11 kills, 11 digs) and Sarah Dooms (11 kills, 19 digs) posted double-doubles for the Crusaders in Friday night’s victory over Green Bay. For each of them, it was their fourth double-double of the season. Four Crusaders have combined for 19 total double-doubles on the year, as setters Kelsey Berrington (seven) and Ariel Cudney (four) have also reached the mark.

Winning in Five: Friday night’s victory over Green Bay marked the third five-set match of the year for the Crusaders, and Valpo is now 3-0 in matches that go the distance. It was the first time this year, however, that the Crusaders have trailed by at least one set at any point in a match and come back to win.

A Balanced Effort: The Crusaders have showcased their balance so far in 2013, both on the stat sheet and in their honors. Five different players have tallied between 125 and 147 kills, with Sarah Dooms pacing the squad at 147 terminations. Meanwhile, seven different Crusaders earned All-Tournament honors during pre-league play: Dooms, Morganne Longoria, Ellen Vanden Berg (x2), Morgan Beil (x2), Kelsey Victor, Kelsey Berrington and Emily Campbell. Dooms and Victor have also earned weekly awards from the Horizon League office as well.

Record Book Watch: A number of Crusaders are making their marks on Valpo’s career record book as the 2013 season hits the halfway juncture. Sarah Dooms already ranks among the all-time top-10 in attacks (3,265 - 6th) and digs (1,445 - 7th) and is on pace to crack the top-10 in kills as well. Ellen Vanden Berg has tallied 335 blocks, eighth-most in program history, while her career hitting pct. of .252 would tie for seventh all-time. Morgan Beil would rank second in Crusader history with her .271 hitting percentage as well. Meanwhile, Ariel Cudney has totaled 123 career service aces, 10th most all-time and just five shy of the fifth spot, while Kelsey Berrington ranks 10th with 1,155 career assists.