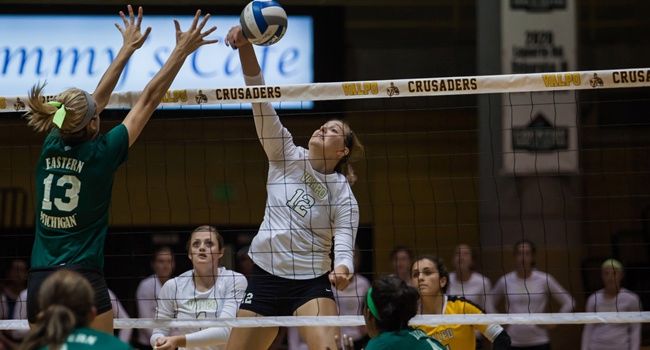 While it was the offensive effort that delivered the victory for Valpo on Friday, the Crusaders got the job done defensively on Saturday.  Senior Ellen Vanden Berg (Little Chute, Wis./Little Chute) reached double figures in blocks for the second time in her career, as she was part of 10 of the Crusaders’ 12 total team blocks.  The Valpo defense helped to force 35 total attack errors by the Vikings as well.

“It was a great come-from-behind win for us today,” said Crusader head coach Carin Avery.  “We had not won here for years, so this win was a long time coming.  Though we didn’t play great tonight, we did enough to win, and I thought we did a nice job defending their outside attackers in set four and five.  I was proud of the way we never lost our composure in the fourth set after we lost the lead as well.”

The Crusaders closed out their first win over the Vikings since 2010 with a dominant performance in the fifth set, surrendering just three points in the final frame.  CSU actually scored the first point and was tied with Valpo at 2-2, but the Crusaders ran off a 13-1 run to close out the match.

Senior Sarah Dooms (Greenwood, Ind./Center Grove) had kills on three of the first seven points of the run, while Vanden Berg and redshirt junior Kelsey Victor (Logansport, Ind./Logansport) combined on a pair of blocks in the first part of the run as well.  The Vikings scored a point to make it 11-3, but a Victor kill returned the serve to Valpo, and an ace from senior Ariel Cudney (LaPorte, Ind./LaPorte) and back-to-back Viking attack errors closed out the match.

The going was tough early on for the Crusaders, as Cleveland State jumped out to a 10-2 lead in the first set and never looked back in claiming the opener.  Valpo took advantage of four straight CSU errors early in the second set to take control, and then after the Vikings closed back to within 12-11, went on the first of two 5-0 runs to keep them at bay.  CSU closed to within 22-19 with a 5-0 run of its own, but senior Janelle Hobbs (Hartland, Wis./Arrowhead) came up with a kill and then combined with Vanden Berg on back-to-back blocks to send the match into the in-game break tied at one set apiece.

Valpo claimed a pair of small leads past the midway point of the third set, but a four-point run by the Vikings gave them the lead at 18-16, and while the Crusaders rallied to tie the set at 18, 19 and 20-all, CSU scored the final five points to take the 2-1 lead in the match.  It was Valpo which jumped out to an 8-2 lead in the fourth set and then withstood a 9-1 run from the Vikings, reclaiming the lead at 14-13 and never trailing again, scoring six of the last seven points of the frame to force a decisive fifth set.

Freshman Morganne Longoria (Burlington, Wis./Burlington) led the way in the service game for Valpo, registering four of the Crusaders’ eight aces, while the team totaled just three service errors.  Longoria also tied for match-high honors with 21 digs, while Campbell added 10 digs to post a double-double.  Vanden Berg was aided on the block by five rejections from Hobbs and four blocks by Victor.

Cleveland State (12-6, 2-3 Horizon) received a match-high 18 kills on .378 hitting from Maggie Hannon, but the Vikings’ two other primary attackers both hit negative for the match.  Dayna Roberts tallied 33 assists and 21 digs, and Nikki Holmes added 21 digs as well.

Valparaiso (15-4, 5-1 Horizon) closes out a stretch of three matches away from home with a non-league contest at IUPUI Tuesday night.  First serve is slated for 6 p.m. CT, with live stats available through ValpoAthletics.com.