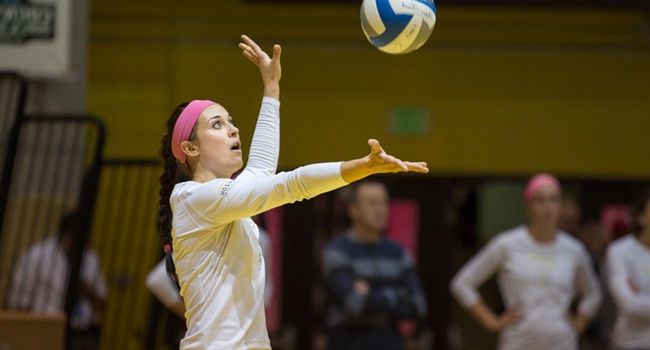 Dooms entered the night needing just nine kills to reach the 1,000-kill mark, and did so with a termination early in the third set, becoming just the 13th player in program history to tally four digits in kills for her career. Already well past 1,000 digs, the senior is also just the seventh player all-time at Valpo to reach 1,000 kills and 1,000 digs in a career. Dooms hit the milestone on another impressive night, leading all players by hitting .364 with 18 kills, while also picking up 12 digs.

“A big congratulations to Sarah Dooms tonight,” said Crusader head coach Carin Avery. “Whenever you have a player to reach both 1,000 kills and 1,000 digs in a career, it says a lot about the time she spent on the floor and the work she's put in to become such a great all-around player for us.  And not only did Sarah reach 1,000 kills tonight, she did it while playing fabulous volleyball all the way around for the second straight match.”

Valparaiso claimed the first set on Friday evening with a stellar offensive performance, hitting .429 with 17 kills in the opening frame. The Crusaders led nearly start to finish, finally pulling away with a 6-2 run late in the set. It was just the second time in Valpo's last six matches that it has won the opening set.

“We talked this week about changing our mentality going into first sets,” said Avery. “We've really been struggling for whatever reason these last few weeks in coming out and playing aggressively in the early going. Part of the problem has been committing lots of errors right off the bat. So we talked about finding a rhythm early on and really focusing on cutting down unforced errors in the first set.”

The Golden Grizzlies would tie the match up heading into the in-game break, however. After an early Valpo lead, Oakland went on an 11-4 run to go ahead 17-11, but the Crusaders fought back, eventually stringing together four consecutive points to tie the set at 20-all. After the teams traded sideouts, though, Oakland put together back-to-back points to go up 23-21 and the teams just traded points the rest of the set as the Golden Grizzlies took the second frame.

The defense stepped up starting in the third set, as five Crusader blocks led to Oakland hitting at a -.081 clip in that frame. Seniors Ellen Vanden Berg (Little Chute, Wis./Little Chute) and Janelle Hobbs (Hartland, Wis./Arrowhead) combined on a pair of blocks in a five-point spurt which also featured kills from Vanden Berg and Dooms, giving Valpo a 19-14 lead. Oakland would rattle off four straight points to close back within one at 19-18, but Dooms ended the run with a kill and Vanden Berg and Hobbs followed with yet another rejection to keep the Golden Grizzlies at bay.

The Valpo defense again forced Oakland to attack at a negative percentage in the final set, while the Crusaders went on a pair of runs on the service of freshman Rachel Bruinsma (New Era, Mich./Western Michigan Christian). Bruinsma first stepped back to the service line with the Crusaders ahead 2-1 and proceeded to serve six straight points to give Valpo a lead it would not relinquish. Then, later in the set, Valpo led 16-11 when Bruinsma rotated back into the service spot, and seven consecutive points later, the match was nearly sewn up, with the match eventually ending on Dooms' 18th kill of the contest.

Valpo's offense hit .224 with 52 kills on Friday, led by the effort of Dooms as five different Crusaders totaled at least six kills on the evening. Sophomore Kelsey Berrington (Britton, Mich./Tecumseh) handed out 26 assists to lead all players.

Defensively, Valpo totaled 88 digs, out-digging Oakland (8-13, 2-4 Horizon) by 17 digs. Berrington and freshman Morganne Longoria (Burlington, Wis./Burlington) tied for team-high honors with 19 digs, while Bruinsma posted a career-best 14 digs to help out as well. At the net, the Crusaders continued their strong blocking of late, totaling 11 team blocks, nine of which came in the final two sets and led by seven rejections from Vanden Berg.

“Having that mid-week match against IUPUI, we had to rest ourselves a bit this week,” said Avery. “So we worked on a lot of defensive stuff in practice to rest our shoulders, and I think you could tell tonight. I thought we did a really good job keeping the ball off the ground, and also a really good job blocking at the net.  Ellen, especially, has been blocking extremely well over the last few weeks (30 blocks over the last six matches), and she was big at the net again for us tonight.”

Oakland failed to place any players in double figures in the kills category, as Cassie Pelloni led the Golden Grizzlies with nine kills. Mary Grassano posted a match-best 20 digs.

Valparaiso (17-4, 5-1 Horizon) looks to close out the first half of Horizon League play on a winning note on Saturday as the Crusaders host Wright State at 4 p.m. on Breast Cancer Awareness day. Live stats and live video through the Horizon League Network will be available through ValpoAthletics.com.