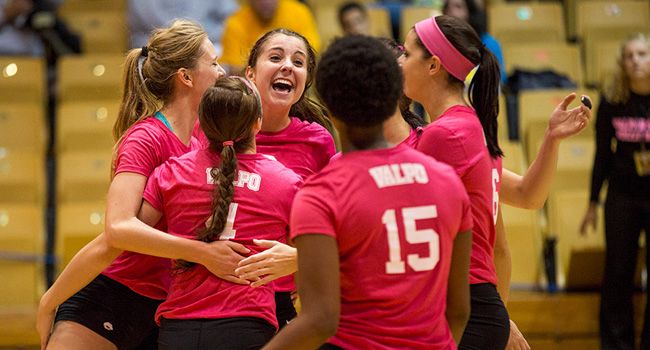 The Valparaiso volleyball team ended the first half of Horizon League play on a winning note Saturday afternoon, sweeping Wright State 3-0 (25-16, 25-18, 25-22) on Breast Cancer Awareness night at the ARC.

With the win, the Crusaders maintained their hold on second place in the league standings, moving to 6-1 in league play at the halfway point. Valpo is also now 18-4 overall, just two wins shy of reaching the 20-win milestone for a 12th consecutive season.

"It's hard to believe that the first half of league play is already over," said Crusader head coach Carin Avery. "We're extremely happy to be 6-1 at the halfway point. We realize that we have to play everyone one more time -it's going to be a tough road ahead for every team in our conference, and we're really excited for the challenge."

The Crusaders had little trouble with the Raiders in the opening set, leading start to finish. Valpo scored the first three points of the frame en route to a 13-5 start to the set, putting down 10 kills during that span, led by three from senior Ellen Vanden Berg (Little Chute, Wis./Little Chute). The Raiders closed to within 15-12, but Valpo closed the set on a 10-4 spurt to claim the opener.

Valpo and Wright State traded points through the opening stages of the second set, but a 5-0 run at the midway point, highlighted by a pair of kills by senior Janelle Hobbs (Hartland, Wis./Arrowhead), gave Valpo a 15-10 advantage. The Raiders responded with the next three points, but the Crusaders answered with a 6-2 stretch to increase their lead, and eventually a block from Vanden Berg and sophomore Nicole Lambert (St. Charles, Ill./East [Radford]) gave Valpo a 2-0 lead into the in-game break.

The Crusaders never trailed in the third and final set, but Wright State kept it close all the way, erasing a six-point Valpo lead at 13-7 to eventually tie the set at 18 apiece. Four straight points by the Crusaders gave them breathing room before the Raiders responded with three straight points of their own to close within 22-21. After the teams traded points, senior Sarah Dooms (Greenwood, Ind./Center Grove) recorded a kill to give Valpo match point, and Hobbs stepped back to the service line and delivered just her second service ace of the season to close out the sweep.

Freshman Morganne Longoria (Burlington, Wis./Burlington) led the effort on the back line with a match-high 13 digs and also picked up two of Valpo's seven service aces. The Crusaders continued their strong block of late as well with nine rejections on the afternoon, as Vanden Berg was in on six of the Valpo blocks.

"We had a nice total team effort tonight," said Avery. "In the second and third sets, we mixed up our lineup a bit and tried some people in different positions. We found we liked our results, and it's nice to see we have some options as we head into the second half of league play."

Heidi Splinter led Wright State (6-19, 0-7 Horizon) with 12 kills on .379 hitting, but the rest of the Raiders combined for just 18 kills. Miranda Puthoff posted a double-double with 24 assists and 10 digs.

Valparaiso (18-4, 6-1 Horizon) steps out of league play on Tuesday evening to take on a strong Illinois State team in Normal, Ill. First serve is slated for 7 p.m., with live stats available through ValpoAthletics.com.