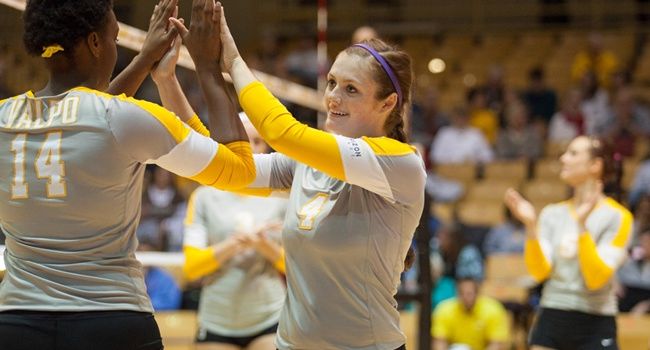 The Valparaiso volleyball team put together one of its most dominant performances of the season Saturday afternoon to sweep UIC, 3-0 (25-13, 25-11, 25-22) at the ARC to kick off the second half of Horizon League play.  The win was the 20th of the season for the Crusaders, extending their streak of consecutive 20-win campaigns to 12 straight years.

Valpo was one of just 11 programs nationwide to have won at least 20 matches in each of the previous 11 seasons, and becomes one of the first to reach the milestone again in 2013.  Head coach Carin Avery has led the Crusaders to at least 20 wins in each of her 12 seasons at the helm, as Valpo has won 282 matches over that stretch.

Valparaiso honored former Crusader standout Angie (Porché) Rundh, a four-time All-League honoree and two-time Honorable Mention All-American, as well as Valpo’s all-time leader in kills and attacks, prior to Saturday afternoon’s match.  To conclude the pregame ceremony, a banner was unveiled in the rafters of the ARC, bearing her name and number.

Once the match got underway, the Crusaders played nearly perfect volleyball offensively in each of the first two sets, never trailing in either frame.  After the teams traded sideouts to start the opener, Valpo reeled off five points in a row, including a pair of kills from junior Morgan Beil (St. Louis, Mo./Marquette) to take a lead it would never relinquish.  Then, up 19-12 late in the set, the Crusaders ended the opener by claiming six of the last seven points, another pair of which came on Beil kills to close out a six-kill first set by the junior.

Valpo hit at a .500 clip in the opening set, but managed to top itself in set two, hitting .522 as it went ahead two sets to none.  The Crusaders scored the first six points of the set on the serve of sophomore Kelsey Berrington (Britton, Mich./Tecumseh) and didn’t look back from there.  Along with the stellar offense came five blocks from Valpo in the middle set, the last of which gave Valpo set point at 24-10, and two points later, senior Sarah Dooms (Greenwood, Ind./Center Grove) sent the Crusaders into the in-game break up two sets with a kill.

The third set proved to be the tightest of the match, as UIC led by one point on a few occasions early on.  A four-point Crusader spurt gave Valpo a 15-10 lead past the midway point, but the Flames cut the lead to two a number of times.  At 23-21, a kill by senior Ellen Vanden Berg (Little Chute, Wis./Little Chute) put Valpo on the verge of sweeping the match, and following a UIC kill, Dooms came up with her 11th kill of the match to close out the win.

The Crusaders hit at a .394 clip for the match, posting 44 kills against just seven hitting errors.  Their .394 hitting percentage was the team’s best in a single match since posting an identical mark in a win over Loyola on Oct. 21, 2011.  Dooms led the way with 11 kills on .385 hitting, while Beil finished the match with nine kills and hit .389.

“Today was the best that we've played for an entire match in a very long time,” said Avery.  “I thought offensively, Ariel and Kelsey both did a very good job of distributing the ball evenly, giving us great opportunities to get a lot of kills today.  Then our hitters did a great job eliminating a lot of the attack errors we've been having over the last several weeks.”

Defensively, Valpo matched a season high with 13 team blocks, led once again by the efforts of Vanden Berg at the net, who totaled seven rejections.  Hobbs and Victor were in on five blocks apiece as well.  It was a total team effort on the back line as the Crusaders out-dug UIC 44-36, as freshman Morganne Longoria (Burlington, Wis./Burlington) led the way for Valpo with eight digs.

“It was another real good night for us defensively as well,” said Avery.  “I felt we were able to take UIC out of their comfort zone on offense.  When we weren't blocking balls, I thought we tagged a lot of great balls which our backcourt was then able to take care of .”

UIC (7-16, 2-6 Horizon) was paced by nine kills each from Sara Sternard and Molly McCoy, but the Flames hit just .038 for the match.  MaryKate Imrie handed out 25 assists.

Valparaiso (20-4, 7-1 Horizon) returns to action on Monday, stepping out of league play for the final time with a non-league contest at Chicago State at 7 p.m.  Live stats will be available through ValpoAthletics.com.